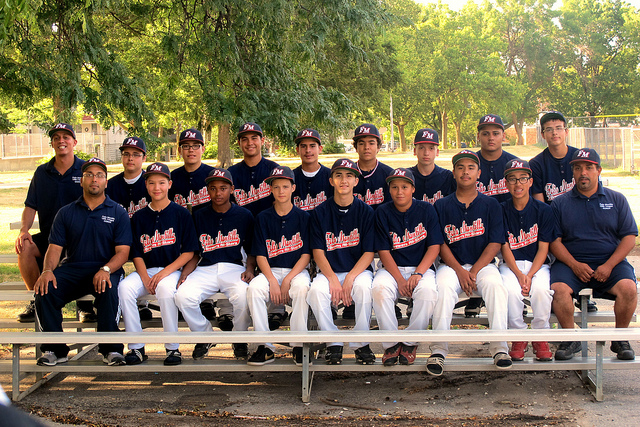 No Felix Mantilla League baseball team had won a District 6 championship in the 39-year history of the league—until now.

The Felix Mantilla Juniors All Star Team, managed by Julian Haliga, and featuring mostly players from his Milwaukee South Side Baseball Club, are district champions, and will now compete in the statewide tournament in West Bend.  At stake is a trip to the regional championship tournament in Indiana and possibly even a berth at the Little League World Series in Williamsport, Penn.

In May, at the start of the season, Haliga bemoaned the fact that the outfield walls in Baran Park, 2600 S. Chase Ave., unlike most suburban ballparks that the Mantilla league visited, were bare and had always been so: No banners, no flags, no championships.

But last year, Haliga’s team came up one victory short of a championship, and their collective confidence grew.

On July 24, as the first flag in the history of the league was hoisted to its temporary spot on a flagpole beneath Old Glory and the setting sun, Haliga stood about 50 feet away. He watched as his team, assistant coaches and league representatives celebrated.  It was a moment of reflection for Haliga, who wasn’t even on the field for the clinching game.

On July 12, the night before the championship game, his team was trailing 6-2 against an undefeated South Milwaukee All Star squad that had pummeled them 19-2 in the opening game of the double-elimination tournament. The umpire made what Haliga described as a rally-killing bad strike call that ended the seventh inning.

The heated discussion between coach and umpire ended with Haliga’s ejection, and also meant he couldn’t coach his team should they come back to win. Haliga considered the ejection unfair, explaining that he had already backed off and agreed to discuss the matter at another time before being ejected. For him it seemed like just another obstacle city teams such as his always are forced to overcome. 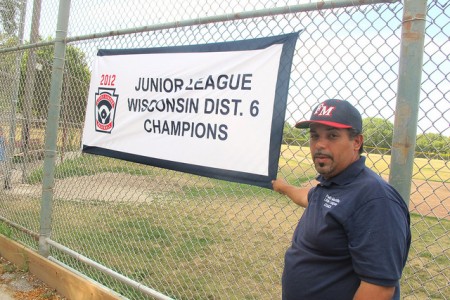 But he didn’t give up and neither did his team. Taking on the hard-nosed, focused and unrelenting mentality of their coach, the team rallied. “He got kicked out for us so let’s do it for him,” said John Anthony Caban, who pitched in the championship game.

Scoring the final nine runs of the game, the team won 11-6, setting up a rematch with the same South Milwaukee team; the long-elusive title at stake.

Assistant coaches Victor Cortes and Jorge Olmo, both of whom played in the Mantilla League as youngsters in the 1980s, coached the final game and the team won 6-2, capping off a run of five straight victories in elimination games.

Cortes called the last game the finest the team played in the tournament. Through adversity, the team showed steel resolve, according to Cortes. And finally, its hard work led to a tangible result.  “All that time, the winter workouts, the fall ball, the practices and the offseason training paid off,” Cortes said.

Olmo, who called each pitch during the championship game, said that from start to finish, the focused team played with heart and intelligence.  “They were motivated, they weren’t afraid and they weren’t going to quit,” Olmo said.

Andrew Tapiz, the team’s catcher, admits that before the game started players had  butterflies, especially considering they were without their manager.  But, Tapiz said, once you see the ball coming, “you forget all that and focus on the game.”

That ability to focus is an attribute Haliga preaches about often.  As he sat in a parking lot during the championship game, barely within shouting distance of the field, he stared at the scoreboard and zeroed in on the sounds of the game, such as cracks of the bat and cheers from the crowd.

He knew precisely what was going on in the game. It was what he’d been coaching his team to do all year.  “I could picture in my head exactly what they were doing,” Haliga said.

He doesn’t regret not being able to coach the district championship game, explaining that it’s his job to defend his players. But he’ll be there to coach his team in West Bend this week as the statewide tournament begins.

Still, aside from the flag-raising ceremony, he’s had little time to savor the team’s success. Others have, though.

Jerad Luedtke, vice-president of the Mantilla league, considers the All Star team’s accomplishment an inspiration to the league’s younger players, who look up to the older ones. “We’re really excited about where the league is going,” Luedtke said.

Not completely satisfied, Haliga considers the Division 6 championship as a step, albeit a giant one, toward his ultimate goal of creating a baseball powerhouse; a dynasty right in the heart of the south side.  “I want suburban teams to say ‘Uh-oh, we’re playing the Mantilla League,’ ” Haliga said.

He insists that he never tried to instill a “me against the world” mentality on his team. He just told them the truth: “We’re playing for the south side, and we ain’t never won nothing.”

Now they have, but Haliga says they’re not done. “Our story is to be continued.”