You are here: Home / News / Arts and Recreation / Peace rally and parade inspire a day of non-violence
Share this... 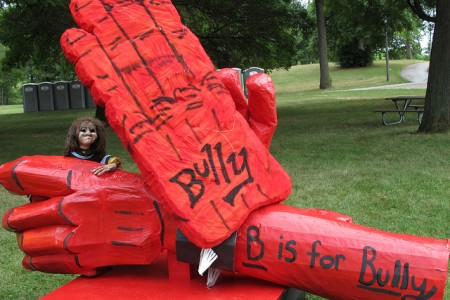 Rain could not keep 1,300 youth, adults and community leaders away from the 10th annual Summer of Peace Rally at Washington Park. The event was begun by youth development workers Tanya Byrd and Fidel Verdin 10 years ago in Gordon Park with a $200 budget.

According to Byrd, Summer of Peace 365 “provides a platform for youth and teens to express their thoughts about their city, train as junior community organizers and produce awareness campaigns around violence, racism and social responsibility.”

Year-round, the organization works with students in after-school programs to teach peace through the creative arts.

“Our approach to inner-city youth is to use music, dance and hands-on art as a means of opening up conversations about violence, character and leadership,” said Byrd.

The rally is an opportunity for the community to come together and share messages of peace, Byrne added.

“If you give youth and teens something to rally around that’s positive and where they can have a part in it and express how they feel…you’re planting a seed,” she said. “Over 10 years we’ve seen kids we’ve worked with become involved in the League of Young Voters and the ACLU because that seed was planted,” she said.

Some of the performances, such as a song by youth from the Mary Ryan Boys & Girls Club, explicitly mentioned peace. Others, such as hip-hop dance routines, said Byrd, showed “working together for a great outcome.”

“The element of inclusion – being a part of the process – is really a core component of building and practicing peace,” said Arno Michaelis, co-founder and executive director of Life After Hate. A former self-described white power skinhead, Michaelis works with Summer of Peace to share his story of healing from violence and hatred.

Michaelis spoke at the rally, along with County Supervisor David Bowen and former Summer of Peace youth leader Tommy Walls, Jr., 20. Walls explained what the program had done for him and other former youth leaders and how it helped them get where they are today. Walls is now a junior at Marquette University studying social welfare and justice with a minor in family studies.

“I think young people know for a fact that when we see injustice we know it’s not right and we want to… do something about it. So I’m encouraging these young people to get out in their own neighborhoods…and actually take action,” Bowen said in an interview.

Fourteen organizations made up the Summer of Peace Coalition, and many set up tents with information and resources. TRUE Skool encouraged attendees to sign a Peace Treaty and promise to be peacemakers. 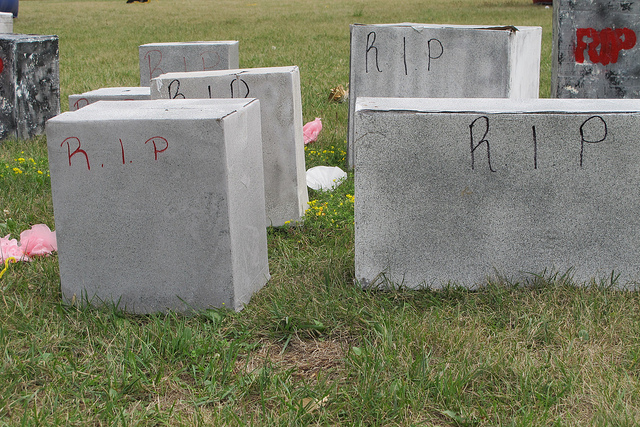 A makeshift cemetery memorialized Milwaukee’s homicide victims and was a somber reminder of the reason for the Summer of Peace Rally. (Photo by Jennifer Reinke)

Between the bandshell and colorful, inflatable bounce houses, a makeshift cemetery offered a somber reminder of the reason for the event. Each year, Summer of Peace organizers keep track of the number of homicides in the City of Milwaukee beginning Jan. 1 and create gravestones in memory of the victims. As of July 24, there were 46 homicides, according to a database maintained by the Milwaukee Journal Sentinel.

“It’s a beautiful, fun day, but we want people to understand why we are doing this. People are dying in the streets and that has to stay present in everybody’s mind,” said Byrd.

The gravestones were carried to the rally in Milwaukee Public Theatre’sSummer of Peace All City Parade, which marched from Sherman Park to Washington Park the morning of the event.

The theme emerged from focus groups held around the community, said Barbara Leigh, Milwaukee Public Theatre co-founder and artistic/producing director. “We talked with people about their greatest hopes and fears. We talked with a lot of youth and one of the things that kept coming up was, ‘people aren’t listening to us; why aren’t they listening to us,’ ” she said.

A giant red fist squelching a small person symbolized the power of bullying to silence young voices. It conveyed, said Leigh, “Keep listening to us. Don’t stop hearing us.”

Six giant puppets portrayed musicians from different decades: a 1950s jazz saxophonist, rock- and-roll legend Janis Joplin, a 1990s punk rocker and even Lady Gaga made the stage. “It was really an effort to bring a lot of the generations together around music,” said Leigh.

Drums painted to look like significant works of art or to display the artist’s own expression, represented individualism or, as one float’s title suggested, “Moving to the beat of your own drum.”

Other floats referred to community places. One showed the school-to-prison pipeline. “There are a lot of kids that if they drop out of the school system, they are headed to prison,” said Leigh.

“There’s no place like home” explored the meaning of home through miniature houses and facades mounted on a float and on shopping carts. Positive messages about home were distributed to spectators.

“It’s very rare for a lot of the peace organizations to actually come together and this is a real opportunity for people to do that,” said Leigh. “That’s the biggest thing that this kind of event can do: pull people together,” she said.