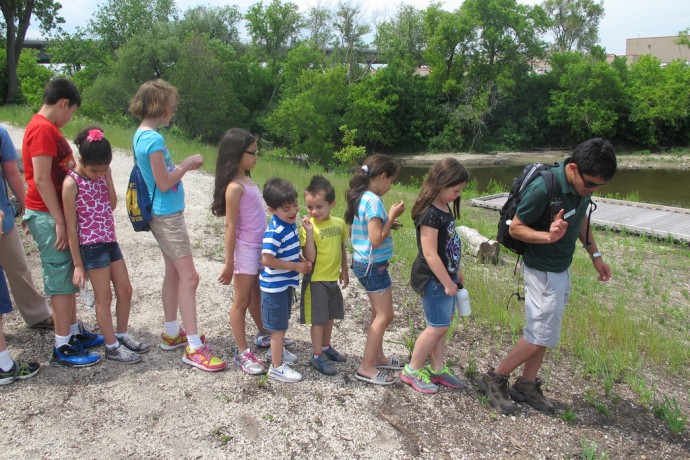 Martin Ponce, a volunteer at the Urban Ecology Center Menomonee Branch, leads a group of children in the Young Scientists Club down an eroded hill. (Photo by Edgar Mendez)

A stroll down many Milwaukee streets on a warm summer day makes it clear that children don’t play outside much anymore, resulting in much more sedentary lifestyles.

“The changes are the result of well-intending parents who are afraid to let their children play outside due to fears for their safety,“ said Dr. Cheryl Charles, president and CEO of the Minneapolis-based Children and Nature Network (C&NN) during a recent visit to the Menomonee Branch of the Urban Ecology Center.

But there are alternatives. In the neighborhoods around the Urban Ecology Center’s Riverside branch, 1500 E. Park Place, and Washington Park branch, 4145 W. Lisbon Ave., crime has gone down significantly since the centers opened.

Recent cases such as the playground shooting of Sierra Guyton, 10, the innocent victim of a playground argument turned shootout, serve to reinforce fears of parents who believe the streets are not safe.

According to Kristine Camarillo, who is raising four children with her husband, last weekend the sound of gunfire interrupted the celebration of her son’s first birthday. The shooting, at South 15th and West Becher streets, wounded a 4-year old boy and a 21-year-old man. Camarillo, a University of Wisconsin -Milwaukee graduate with a degree in community engagement and education, said she’s shaken by the violence. 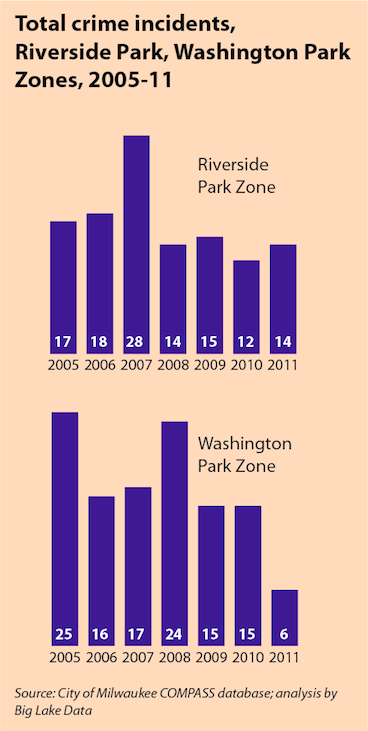 “I never let our kids play on the sidewalk and they are never outside by themselves,” she said.

France Mendoza, who lives in Muskego Way with her two children, takes the same approach. “I let my kids play outside only when I can supervise them.” She added that kids aren’t safe anymore, like they were when she was growing up.

But there are options for even the wariest of parents.

The areas around Riverside Park and Washington Park have lower crime rates than the census tracts they’re in, according to a study commissioned by the centers and conducted by Big Lake Data, an independent data analyst, based on 2005-2011 Milwaukee COMPASS crime data.

In the Riverside Park “zone,” which encompasses the center and adjacent blocks, the peak number of crimes was in 2007, when 28 incidents were reported. That figure was cut in half by 2011, and about half of those crimes were categorized as acts of vandalism.  In the Washington Park “zone,” crime incidents dropped from 25 in 2005 to six in 2011, according to the study. In 2013, a 17-year old was gunned down in the playground by someone he knew.

“When you have traffic in the park, it seems like crime seems to gravitate away from it,” Karidis said.

Filling up the park and getting children to participate in the free programming offered at UEC has not been a fast process, Karidis explained. He said classes offering canoeing, fishing and even cross-country skiing in the winter, have served more and more kids each year, and festivals that used to be sparsely attended, now bring 500-700 to the park. That happens because kids who visit the ecology center with their classes go home and tell other kids and their parents about their experiences, said Karidis.

That’s the process that changes perceptions, explained Beth Heller, senior director of education and strategic planning at UEC, who said that eventually the image of a safer neighborhood turns into a reality.

“It’s safer to be in the park than in the street,” Heller said.

On West Pierce Street from South 34th to South 36th Street, a sunny Saturday afternoon was only appealing enough to draw two youngsters, sisters, out of their homes to sit on the grass in front of the Silver City Townhomes, 3500 W. Pierce St. Another child was riding a go-kart with his father. Even Arlington Heights Park, 3429 W. Pierce St., was empty at 2 p.m.

Nearby, on the grounds of UEC’s newest center, the Menomonee Branch, was a different scene, as nearly a dozen youngsters gathered for a weekly meeting of the Young Scientist’s Club. Raphael Jones, 8, who was taking his first hike with the club, biked to the center with his older brother Willie, from their Silver City home. Raphael and the other youngsters learned about bugs, land erosion, and about a strange piece of metal, likely a remnant of the area’s industrial past, that the kids found in Three Bridges Park.

“I like being outside because I’m more active,” said Raphael, as he squinted in the sun. 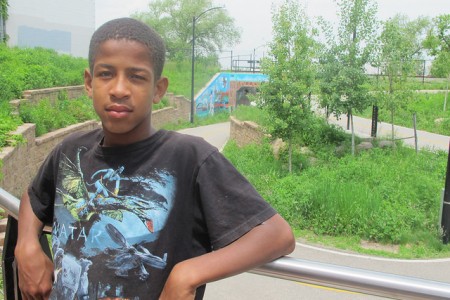 Willie Jones, 10, likes to ride his bike to the Menomonee Branch of the UEC. (Photo by Edgar Mendez)

Having a safe place to play that doesn’t involve electronics reaps enormous health benefits for kids, said Charles, who co-founded C&NN in 2006.  “Playing in nature improves their cognitive abilities, combats obesity and teaches them how to take appropriate risks,” Charles said.

She added that the Urban Ecology Center is highly regarded around the country for its ability to create nature-based experiences in urban environments. She was there recently when the center announced the findings of a two-year study, done in conjunction with the Medical College of Wisconsin and University of Wisconsin – Milwaukee, on the benefits for children of outdoor play. One key finding was that children who report playing outside have strong parental support for doing so.

And while that may seem obvious, it’s just another reminder that kids need encouragement from their parents to reap the benefits of the outdoors. As for parents who are just not comfortable letting their children play beyond earshot, Charles suggests joining them.

“As parents and grandparents and older siblings we can join the kids in exploring,” she said.

Garnering buy-in from the community that these parks are safe and valuable places for kids to play is all part of the journey, said Karidis.

“You’re always going to have challenges no matter what park you’re in or street corner you’re on; what we have here is a very valuable asset,” he added.

Heller has seen both the Washington and Riverside parks help spring their neighborhoods back to life and expects to see the same transformative effect at the Menomonee UEC, adding,  “That tells us it’s important to be here.”