Standing on the trash-sprinkled front steps of the Schrager Auction Galleries, 2915 N. Sherman Blvd., Wolfgang Rosenau recalls the deathbed conversation he had with the building’s late owner, auctioneer Al Schrager.

“I made a promise to a dying friend,” Rosenau said.

It was September 2013 when Schrager, by then too weak to speak, squeezed the hand of Rosenau, his friend and fellow antiques dealer, acknowledging Rosenau’s promise to help find a suitable owner for his beloved auction house, located across the street from Sherman Park.

Soon after, Schrager passed away.

The half-block-long solid stone building, which features an enormous stained glass dome in addition to a 1,400-seat auditorium, has languished on the market since 2010, after Schrager moved his auctions online.

The building originally opened in 1920 as the Third Church of Christian Science, but was purchased by Schrager in 1980 as the headquarters for the auction business he would run for more than 60 years.

“My dad felt blessed to do his business as an auctioneer in this building,” said Jeff Schrager, a real estate broker in California. 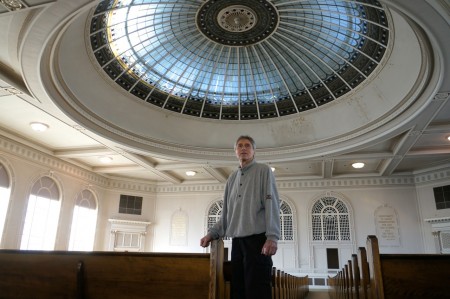 Wolfgang Roseanau stands against the center aisle of pews. (Photo by Adam Carr)

Schrager described his father as a caring man with a strong faith in God and sense of community. The son said his father wanted the building to serve a higher purpose, such as reverting to a church or serving the area in another way. Schrager said he hopes the building could serve a purpose that honors his father’s spirit.

“We want it to be more than just a landmark; we want it to be a useful component of the community he was a part of,” Schrager said, adding that a nonprofit or a group of community organizations would be a great fit for the building.

The auction house is located in the 53210 ZIP code, which once housed A.O. Smith Corp., Briggs and Stratton Corp. and many others factories that have since shuttered or moved away, eliminating thousands of jobs once held by area residents. In 2012, nearly half of families in 53210 had annual incomes of less than $20,000, compared to 29 percent in Milwaukee County, according to a UWM Employment and Training Institute study.

The needs of residents in the area have changed a great deal since the days when the building served as a world market and items ranging from sets of ivory dishware to $100,000 tapestries were sold there, Rosenau said.

That’s why he has been reaching out to city officials, school administrators, theatre owners, nonprofit organizations and just about anyone else who will take the time to listen to his idea to turn the building into a neighborhood anchor. Rosenau keeps a log, now six pages, of each person he’s contacted so far.

He’s immersed himself in the community, attending gun violence conferences, town halls and other meetings, each time learning more about the lives of African Americans in Milwaukee and the connection between poverty and violence.

He regularly invites community leaders to visit the auction house and consider running a community center there. “How great would that be if the building could become the Al Schrager Community Center,” said Rosenau, before heading up a staircase to the second floor.

“This is about more than selling the building, it’s about improving the neighborhood,” Rosenau added.

Rosenau thinks that organizations are afraid to invest in the neighborhood, but says if they do, crime will decrease significantly.

Recently, the Near West Side Partners introduced a three-year, $1 million initiative called Promoting Assets and Reducing Crime (PARC) to improve the area near Marquette University by engaging residents and business leaders in the community.

Jeff Schrager said he would like to see the same type of concerted effort by city officials and other stakeholders to repurpose the building as a catalyst for change in the Sherman Park neighborhood.

“To let a building that is that key to the neighborhood go unused is a tragedy and a failure … of city officials to people in that neighborhood,” Schrager said.

To increase the odds that a nonprofit will occupy the building, the family would consider making a valuable charitable donation or offering a below-market sale price, according to Schrager.

The building is remarkably well kept, and hints of its past uses are everywhere. In a room above the auditorium’s upper balcony sit rows of lockers once used by ushers for the church. Behind the auditorium stage, where auctions were held, are bathrooms, small bedrooms, storage and other rooms. There are several other large spaces that were used for auctions, according to Rosenau.

Scattered across different sections on the first floor of the auction house are a mix of Schrager family possessions and remnants from the auction house business: empty hutches, outdated desktop computers, fax machines, conference phones and coffee cups filled with pens and pencils.

The building is big enough to house six to eight smaller agencies, or perhaps one big one, while the auditorium can be used for talent shows and other fundraisers — “something for the kids in the neighborhood to look forward to,” Rosenau said.

One stumbling block is that there are only a few parking spots in the back, and street parking is limited. Rosenau said he’s had conversations with city officials about the possibility of turning another property into a parking lot for the building.

Dozens of tours for potential occupants have been held over the past few months with no luck, according to Schrager. Still, he said, “We’re not looking to dump it or donate it just to get it off our shoulders.” He said he’d like the community to rally together to find a solution for the landmark building, even if it means renting it out.

Until that happens the auction house will remain unused, and Rosenau’s promise to a dying friend will loom larger and larger on his mind.