You are here: Home / Home / Carousel / Powered by pedals, unity ride brings together city’s North and South sides
Share this... 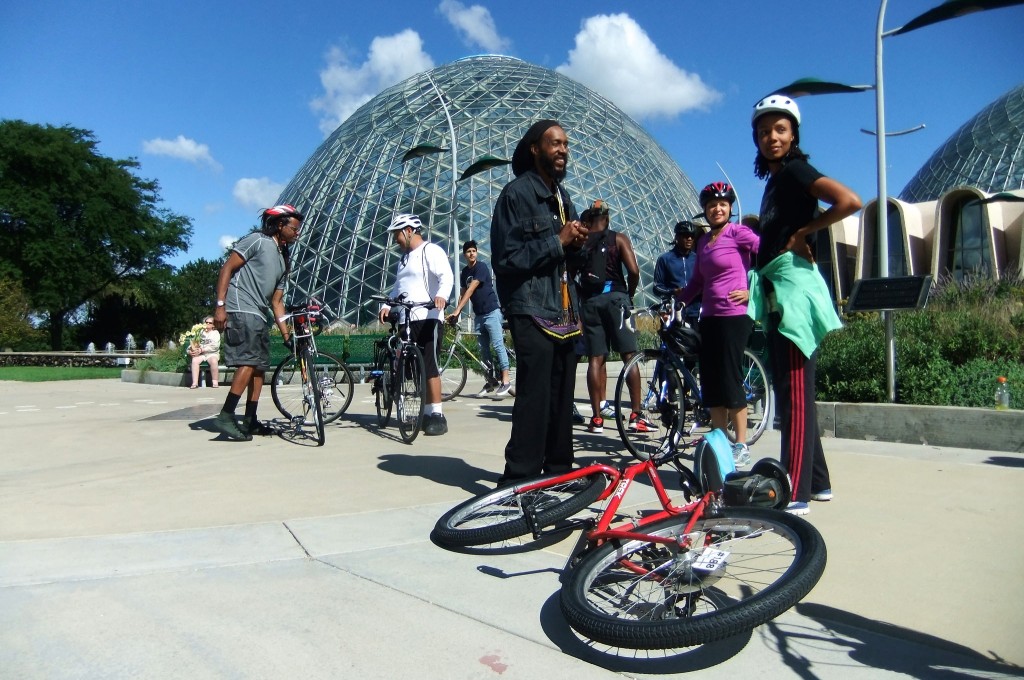 Under a bright midmorning sun, Jennifer Ruel pedaled her bicycle into the Mitchell Park Conservatory parking lot on a recent Saturday. Biking has been a passion and means of transportation for the Walker’s Point resident for more than nine years.

“I love powering myself; it makes me feel strong,” she said.

Ruel and her daughter joined a group of nearly 20 people from Milwaukee’s North and South sides for the first of two “Black & Brown Unity Rides.”

The Milwaukee chapter of Red Bike & Green organized the event. Ammar Nsoroma, the chapter’s founder, worked with Tatiana Maida of the Sixteenth Street Community Health Center to bring the neighborhoods together. 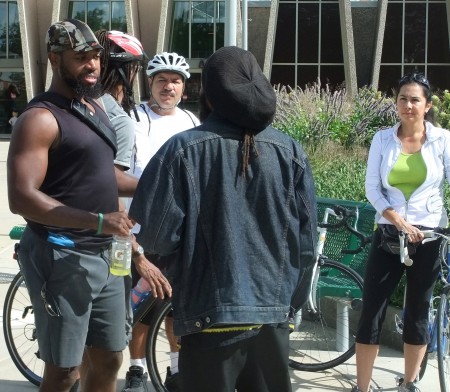 Danny Cross came to the ride to make connections with cycling enthusiasts on the city’s South Side. (Photo by Wyatt Massey)

“We want to do these black and brown community rides to promote unity,” Maida said. “It’s more empowering being in a group.”

That day’s ride consisted of a 5.5-mile loop through the city’s South Side. Biking in a group is safer, Nsoroma said, and the event offered an opportunity for people to gain confidence riding in the city.

“Red Bike & Green was started to grow ridership among the black community,” Nsoroma said. “We have to get people to think about riding as something functional and something to affect health.”

Improving health is one component of Red Bike & Green’s “3 point plan,” which includes improving the environment and the local economy. Riders benefit from the physical activity, are exposed to a low-cost transportation option and learn how biking reduces carbon emissions. The routes also include stops at local businesses.

Danny Cross has participated in the weekend rides since the chapter was founded last year. The opportunity to meet new people keeps him coming back, he said, and riding in a group gives others the chance to build a healthy habit.

“When we get out here and ride, other people see and maybe they’ll join,” he said. “We have more and more people showing up every time.”

Mike Honcho was new to Milwaukee when he met Nsoroma. Biking became a way for him to get involved in and experience his new home.

“I had to find a way to enjoy the city,” he said. “I saw a group of like-minded riders and I wanted to ride with them.”

“Other people are starting to take notice,” he said. “Our first rides we had very few people, usually four or five riders.”