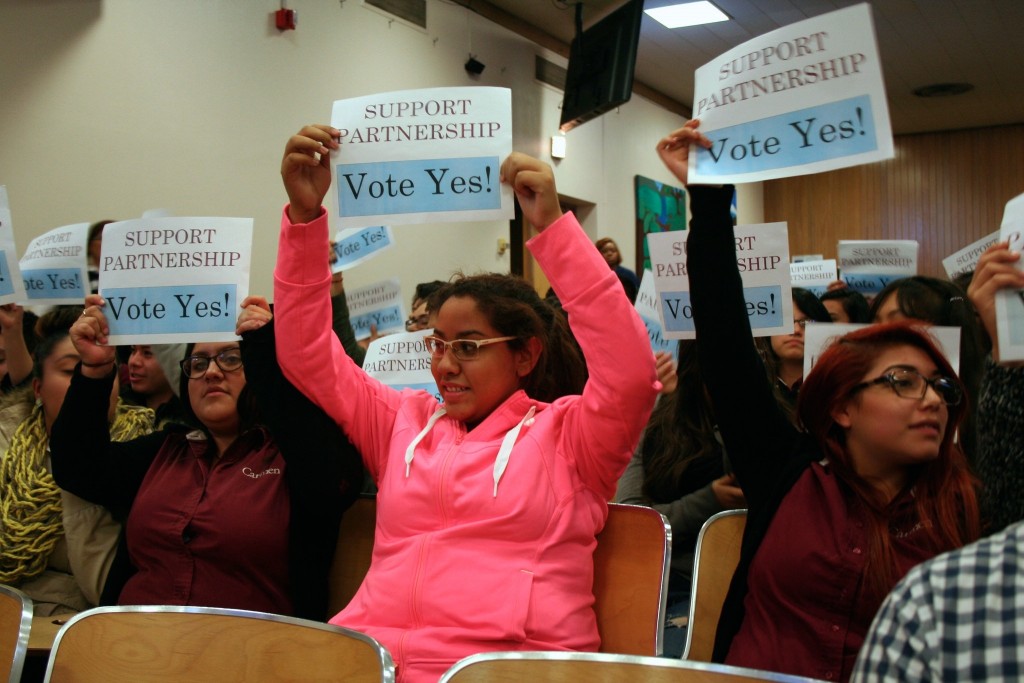 At the end of a long night at the Milwaukee Public Schools central office building, 5225 W. Vliet St., School Board Directors Larry Miller and Carol Voss exchanged a short, apologetic embrace. Miller and Voss — who were on opposite sides of a vote to place Carmen, an MPS charter school, under the same roof as Pulaski, a longstanding traditional high school — were able to put disagreements behind them.

Tensions were high during an almost two-hour discussion over the proposal. Board members took shots at one another and, at one point, the new Pulaski principal. Cheers and boos were frequently heard from the crowd of about 300 students, teachers and parents who packed the building’s auditorium for the board meeting.

A 5-4 vote in favor of the proposed partnership resolved the heated debate. Carmen Schools of Science and Technology will move into the Casimir Pulaski High School building, where the two programs will operate side by side. The new Carmen campus, its third, will enroll 200 9th graders in 2016-2017.

In a surprise turn of events, District 2 Representative Wendell Harris was the deciding vote. Harris, who was voted in this year on a wave of pro-union support, had been staunchly against charter schools that do not employ union teachers. Milwaukee Teachers’ Education Association (MTEA) President Kim Schroeder used the words “disappointment” and “bewilderment” to describe the union’s reaction to Harris’ vote. Pulaski Principal Lolita Patrick appeared emotional after the decision; both she and Carmen Head Patricia Hoben declined to comment. 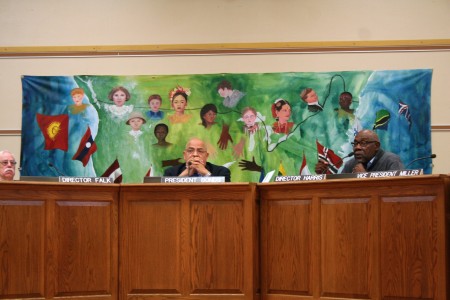 MPS Board Director Wendell Harris (right) shocked many with his vote in support of the partnership proposal. (Photo by Jabril Faraj)

“I was very confused,” said Pulaski Special Education teacher Karina Tweedell. “I was just really confused about the speech that Mr. Harris gave today as opposed to what I’ve heard from him before.”

Tweedell, who has been at all the meetings about the potential partnership, said that at the last board meeting in September Harris had echoed teacher concerns that “this is not a good idea and we are going to observe, basically, a different form of segregation, not based on race but based on class or parent involvement.”

Harris, who has worked at several MPS schools including Pulaski said, “I was on the front lines of all these schools that were in chaos.” Harris said a letter he received from Patrick, as well as a visit to Carmen, where he was impressed by the school’s climate, helped change his mind.

“I have more to lose in support than anyone that will be voting on this tonight,” he said “This is really a gut-wrenching conversation for me. But I’ve come to a point where it’s absolutely about the children.”

Five community meetings have been held since Sept. 16 at locations around the city to solicit feedback from Pulaski families. During the October board meeting, Katie Polace of the office of board governance stated that MPS has had “close to 1,200 interactions with constituents” about the matter — at the community meetings, committee meetings, through email and two petitions. She said the majority of the feedback was in support of the partnership.

“This is a great opportunity and I would love for other students to have that same great opportunity,” said Carmen senior Enrique Santos. Santos, who attended MPS middle schools, was accepted to Carmen after being placed on the waiting list at Ronald Reagan High School. He called it “a tragedy” for students to be denied a seat at the high-performing Carmen South, which currently has a wait list of more than 300.

A large contingent of Carmen students, who were transported to the meeting via bus, cheered after the votes were counted. But board members and others raised concerns that the Pulaski community was not adequately engaged in the feedback process. District 6 Representative Tatiana Joseph, whose district includes Carmen South and is adjacent to District 7, where Pulaski is located, said students and teachers from Pulaski “didn’t feel included in this decision.”

“The children and the teachers are able to name their problems,” said Joseph. “They can tell you to the ‘t’ why their school is failing. If we at the district haven’t had a chance to go and talk to them about this, shame on us.”

Some attendees noted that the auditorium was clearly divided, along both racial and school lines. During the 2013-2014 school year, the last for which data is available, Carmen South was 97 percent Hispanic. In the same year, Pulaski was 54 percent African-American, 30 percent Hispanic and 7 percent white. Gail Hicks, a former special education teacher and education activist, said she’s concerned that African-American parents weren’t involved in the process as much as the Hispanic Carmen South parents were. “Both entities need to be represented, and both entities are not being represented. That is the problem.”

Tweedell noted that many of her students’ parents are single or work multiple jobs. “With the sort of community that we are currently serving, they might not have the resources to come out and be as proactive as this other Carmen community.”

Tweedell added, “I’m not buying the rhetoric that we hear, that this partnership will benefit us. If you really want to benefit Pulaski, you could simply invest more in Pulaski and give us more resources.”

The motion that eventually passed, which was introduced by MPS Board President Michael Bonds, requires the MPS administration to bring the board a comprehensive plan detailing the program this month, including a timeline to implement an International Baccalaureate (IB) program. In an effort to allay fears of critics, the amended motion also included a requirement that Carmen’s enrollment in the building be capped at 800 and that the campus retain the Casimir Pulaski name. But Bonds said, “the public has made its voice clear,” stating that there was, “overwhelming support” for the partnership.

But Vice President Miller questioned the ability of the partnership to positively affect Pulaski, especially given the lack of community involvement. “There’s great work going on at Carmen. But will this proposal lead to great work going on at Pulaski?” he said. “To say that the only way that we can meet the needs of large numbers of students at Pulaski is through this proposal I think is misleading.”

Joseph added that this is not an issue about performance. “This is an issue about equity and fairness. As a person of color living in District 6 for the last 24 years of my life, I have lost count of the many times we have not been taken into consideration around decision-making that affects our everyday lives.”

Joseph and Miller spoke of possible alternatives, based on conversations with stakeholders as well as a needs assessment. Both mentioned the need for a middle school in the area, as well as for a bilingual IB program. Had the partnership been voted down, Miller was prepared to bring an alternative motion, containing both of those proposals.

“That’s a plan that really does meet the needs of that particular community,” said Miller.

But, in the end, it may have been too late for a traditional solution. “We’ve had all kinds of opportunities to do something at Pulaski and we have not done so,” said Harris, who emphasized the need to improve educational opportunity at all MPS high schools.

Myra Edwards, senior adviser to Mayor Tom Barrett, said, “I think we have to figure our way back to providing a robust, meaningful, comprehensive high school experience for young people in this community. And, I think that this is that incremental step in the right direction.” Barrett’s office sent a letter to the MPS Board urging members to approve the partnership.

After the vote MPS Superintendent Darienne Driver said, “The work starts now.” But Tweedell commented, “We’re already not getting along and we haven’t even started sharing the building.”

“I had some hope that this would not pass today and it was shattering to see that it did,” said Tweedell. “We definitely, as a staff, will figure out a plan of how we could benefit the students better.”

Added Edwards, “I think when you clearly sit down with an agenda to make something better for kids, you squelch all that,” she said of the antagonism. “I think there’s an opportunity, in the future, [for] all these folks to come together and really talk this thing through.”

Editor’s note: This story has been updated to clarify that Carmen’s third campus will be housed at Pulaski High School and to correct Ms. Polace’s first name.