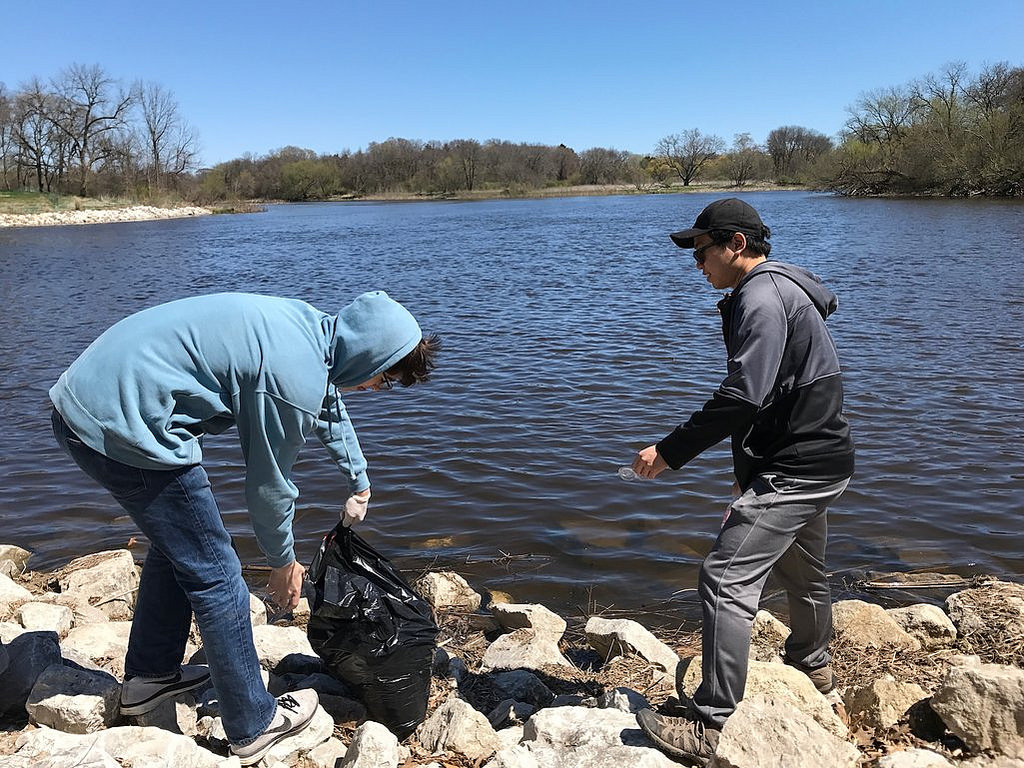 More than 160 volunteers participated at the Lincoln Park site for Milwaukee Riverkeeper’s 22nd annual spring river cleanup, among thousands of volunteers throughout the city.

“Do you know what an event like this does? It builds community,” said Sharon Szatalowicz, a Friends of Lincoln Park member. “That’s what we’re about: bringing neighbors and neighborhoods together to celebrate Lincoln Park.”

Szatalowicz has lived in Lincoln Park for 30 years and was one of the cleanup captains for the site.

“I’ve watched a lot of things happen and evolve surrounding the park, so I go to all of the meetings. My advice to everyone is to show up,” said Szatalowicz. “It starts here. Movements start with the individual.”

About 4,000 volunteers removed trash at 50 sites along the Milwaukee River Basin at the Earth Day event. 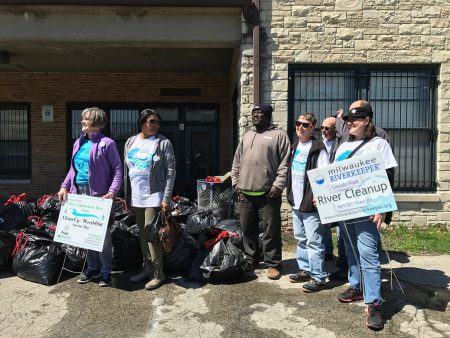 Members of Friends of Lincoln Park gathered as early as 8 a.m. to remove trash from the Milwaukee River. (Photo by Camille Paul)

“We have three really important rivers in Milwaukee that flow into Lake Michigan,” said Jennifer Bolger Breceda, executive director of Milwaukee Riverkeeper for the past three years. She added that 1.3 million people rely on drinking water from Lake Michigan, “so it’s really critical that we steward the resources we have and take care of them.”

Since this year’s river cleanup fell on Earth Day and was the 22nd cleanup on the 22nd day of April, Breceda wanted to do something special. She worked with Lindsay Stevens Gardner, executive director of Rock the Green, to create a mini-Earth Day festival for the post-cleanup celebration in Estabrook Park, 4400 N. Estabrook Drive.

“Milwaukee Riverkeeper always puts on a post-cleanup celebration,” she said. “After pulling nearly 70,000 pounds of trash out of the rivers, [we] didn’t want to have an event that created more trash.”

During the festival, volunteers enjoyed food from local organic vendors using compostable plates and silverware, and drank beverages from compostable cups. They were entertained with a performance by rock band Trapper Schoepp on a pedal-powered stage.

“These cleanups are very family-friendly,” said Breceda. “I have brought my son since he was 3 and this will be the third year he has participated. I consider this the largest volunteer event in the state.”

Volunteers arrived at cleanup sites as early as 8 a.m. with canoes in tow, pulling trash out of the rivers or the surrounding area.

“This is what Earth Day is all about,” said volunteer Luke Burkholder. “There is just a lot of trash in the river; you can go canoeing and not see it, but there is a lot, which was eye opening for me.”