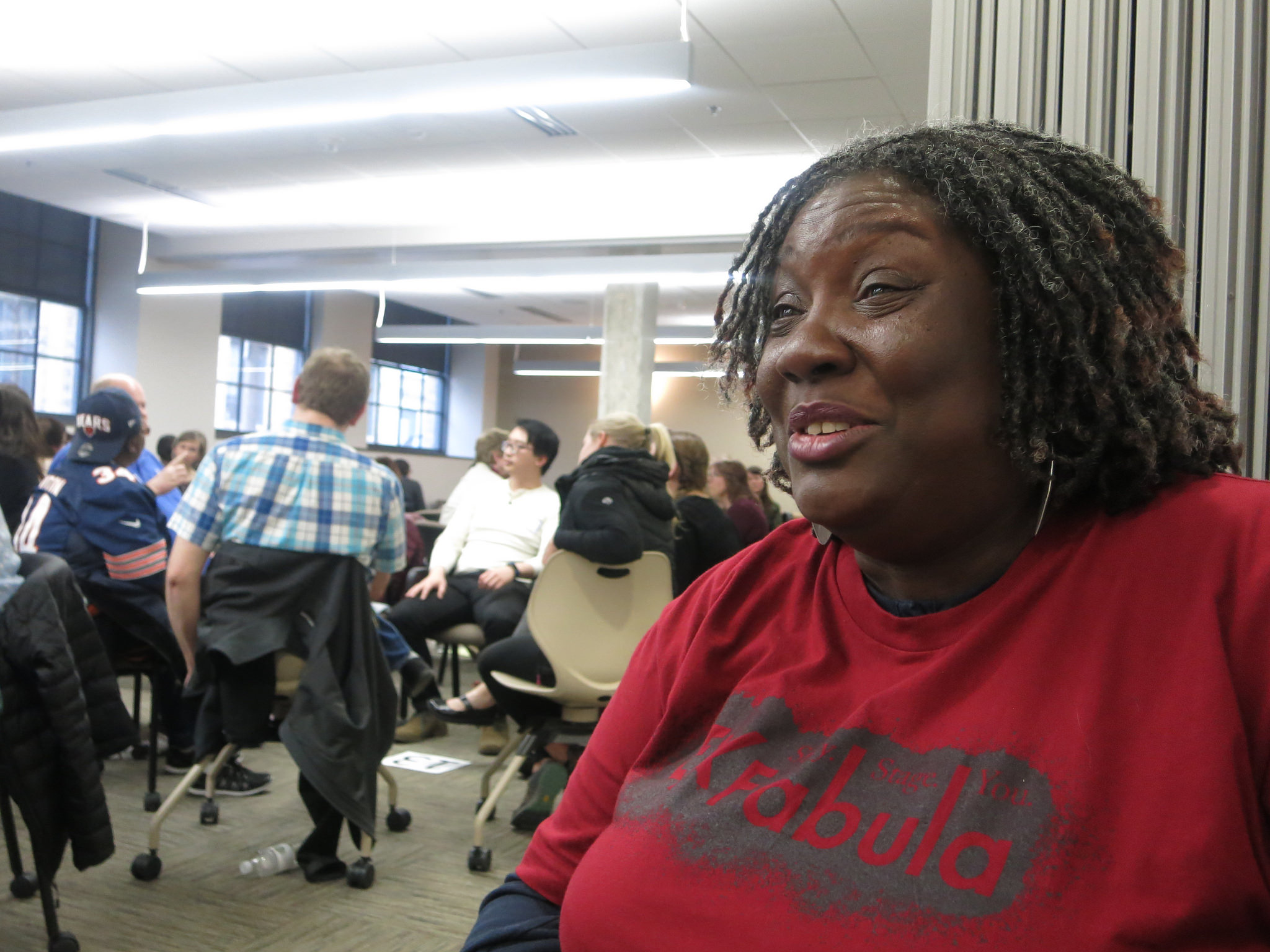 Lisa Williams smiles as she talks about going from homeless to homeowner. (Photo by Talis Shelbourne)

Homelessness and depression dominated many years of Lisa Williams’ life.

When Williams was 12, her grandmother died and she lived with aunts, uncles and her parents off and on until graduating high school.

After graduation, Williams couch-surfed, but never dealt with her depression. In the first apartment she was able to rent, she attempted suicide and landed in a mental health institution.

“That was the first time I ever felt at home,” she said of the institution.

Williams’ story was one of three showcased at the “Housing in Milwaukee as a Public Health Issue” event, which was attended by 150 community members. The event was co-hosted by Ex Fabula, which focuses on building community connections through storytelling, and the Zilber School of Public Health at the University of Wisconsin-Milwaukee.

Williams and other Ex Fabula fellows Sue Blaustein and Don Tolbert told their stories during the first half of the event and audience members participated in group discussions during the second half.

Blaustein, a poet and former food safety inspector, spoke about an incident she experienced in 1983 as a single, white female living at 41st and Hampton.

“I was a model tenant until I started dating a black man,” she said. “The landlord told me this was unacceptable. He said, ‘Sue, we have to be careful because we have a lot of valuable things in the house.’” 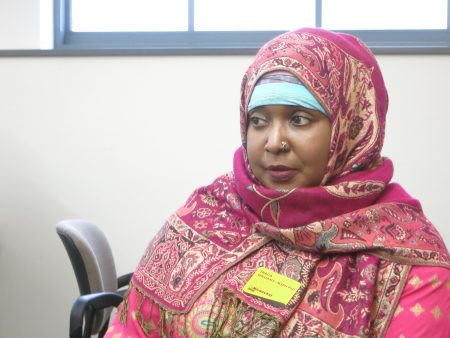 Dr. Thalia Williams pauses after making a point in the group discussion. (Photo by Talis Shelbourne)

Blaustein filed a discrimination complaint and prevailed. She and the African-American man in her story have been together for 35 years.

“My landlord could have known a good man,” she concluded, “but that was his loss.”

Don Tolbert, a paralegal at the Eviction Defense Project, recalled his experience helping a middle-aged black woman fight her eviction.

Lawyers helped the woman successfully fight her eviction, and her words made Tolbert think differently.

“When she said it a fourth time, it clicked a switch in my head because I had been looking at it analytically,” he said. “But I realized she was reacting to the 50 years leading up to her being evicted.”

Williams spoke about being homeless, and how the son she had at age 26 motivated her recovery.

“The [psychiatrist] prescribed me some medication and I had some stigma about taking it,” she said. “[But] as I started taking it, I was feeling better (and) I could see my son becoming happier as I was becoming more engaged with him.”

Williams works at The Guest House, helping homeless people get housing and reintegrate into society. Although she eventually obtained stable housing and bought a home in 2014, she has never forgotten her experience.

“In the back of my mind, I have to think, am I ever going to be homeless again?” she said.

During the group discussions, audience members reflected on what they had heard and what needs to change.

Azure De Williams, executive director of the Milwaukee Area Health Education Center, pointed out the importance of transportation for people in government housing.

“They move people out to these areas and then remove the bus lines — those people are trapped!” she said.

Natalie Hayden of Milwaukee Job Corps also noted the connection among housing, transportation and employment. “All the great-paying jobs are out there, but they can’t get out there,” she explained.

Brett Waterhouse, the curator of Grove Gallery in Walker’s Point, said the city could institute meaningful reforms, such as more urban farming, and most importantly, desegregation. “Integrating the neighborhoods is important because living in isolation isn’t going to bring anything good,” he said.

“We want people to look at housing as a public health issue and think about it more constructively instead of thinking, ‘This problem doesn’t affect me,’” added Carolina Mulvey-Videla, who is a community connector at Ex Fabula.

In her small group discussion, Dr. Thalia Williams, community engagement coordinator at the Zilber School of Public Health, commented, “If I work as hard as anyone who’s white, I should receive the same things.

“That’s why I teach people: ‘Know your options, exercise your options.’ I live life with an aggressive edge now — you can’t tell me no,” she said.