Foreclosures in Milwaukee, block by block

John Weathersby and Gladys Carroll-Weathersby are on a mission to put back some of the value in their Lindsay Heights home — and they’re hoping to change the neighborhood to do it.

That underscores the overall decline of the blocks surrounding their home, which lost about 53 percent of their property value at an average of $41,000 per house since the housing crisis hit Milwaukee in 2008.

The Weathersbys also are just one example of the house-by-house efforts of neighborhood residents to improve the area, led by local groups such as Walnut Way Conservation Corp. and Legacy Redevelopment Corp.

Gladys, an auditor at Global Logistics Operations, and John, an engineer at General Electric, purchased the vacant property across the street for $12,000 and are putting in an estimated $80,000 to renovate it. They also kept up the lawns and installed flowerbeds in some of their elderly neighbors’ properties in their free time.

“It’s about building the neighborhood up more than anything,” John said. “Slowly but surely we’ll build it back up.” 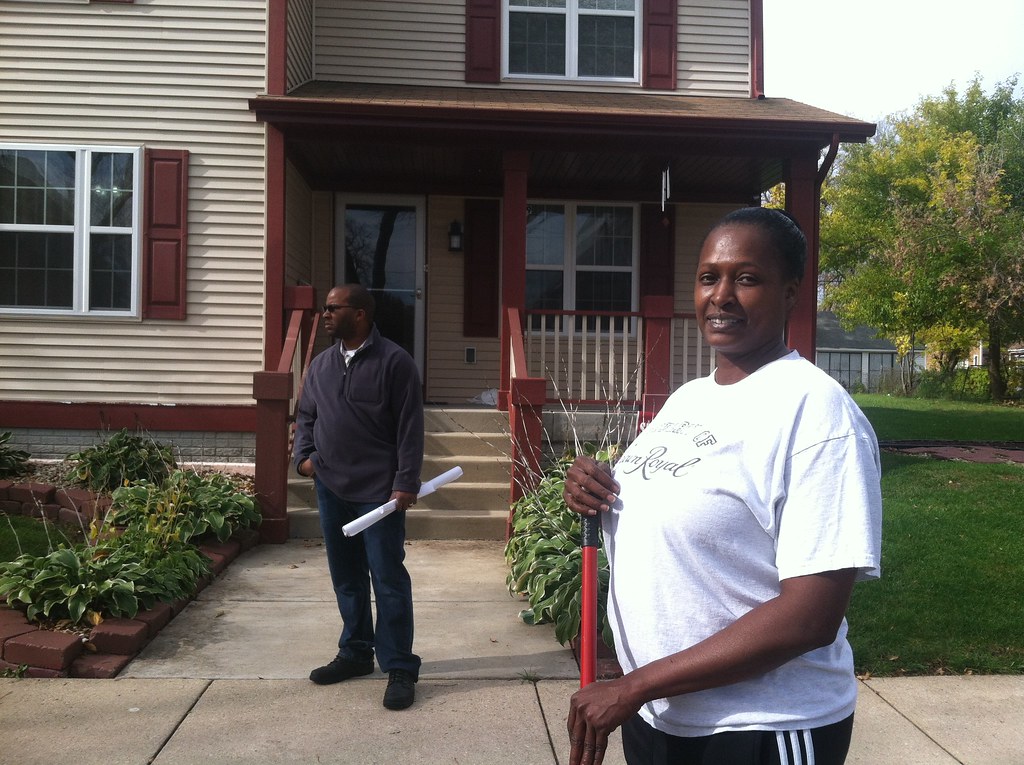 Gladys Carroll-Weathersby and John Weathersby, outside their home on the 2400 block of N. 16th Street.

As for crime in the neighborhood, Gladys has been relentless in monitoring and recording the activities of criminals, including her former neighbor to the south.

“He’s in prison now,” Gladys said smiling. “He hates me tremendously, but I don’t care.”

“The neighborhood hurt itself”

Despite community efforts, scars from the 2008 recession are evident in Lindsay Heights.

A handful of century-old occupied homes with tenderly cared for properties bear Neighborhood Crime Watch signs that read, “If I don’t call the police, my neighbor will.”

But those properties are eclipsed by lots with trash bags strewn across tangled weeds and front doors that display in large, red letters, “This property is owned by the city of Milwaukee.”

The number of vacant properties has almost become a sad joke for neighborhood residents.

“They should just start giving us homes,” said Shaleta Collins, who lives on the 2500 block of N. 16th Street. “But seriously, those people in the shelters should just be put in these houses. It can’t be any worse.”

Nicole Wade, who lives adjacent to the Weathersbys, predicts that the house across the way from hers, which is missing its front porch and shingles from the top eaves, will be the next to be knocked down by the city.

“Vandals came around and broke in not too long ago,” Wade said, waving gruffly in the direction of the deteriorating house. “They set it on fire in broad daylight when we were just sitting outside. They just don’t care anymore.”

Wade, whose father owns her family’s house, has lived in the area her whole life. She can attest to the time when it “looked like a neighborhood” — back when the area was a place where middle-class blacks staked a claim in the city.

The 30-block neighborhood was named after community activist Bernice Lindsay, who led Milwaukee’s YMCA and was often referred to as “the mother of the black community.”

Long-time neighborhood residents said the area was home to middle-income black people before Milwaukee’s big industries began leaving in the past few decades. Many owned local businesses and prided themselves on their comfortable, two-story homes. A few were state legislators and one was Milwaukee’s first black attorney.

But that legacy has all but faded. When residents are asked to describe the area today, they casually refer to the relentless prostitution and drug trafficking that empty properties attract like magnets.

As a result, violent crimes and robberies occur about four times more often in the blocks surrounding the Weathersbys’ house than in the rest of Milwaukee, according to city data.

On their block alone, which houses mostly elderly and infirm people, every house except the Weathersbys’ was broken into over the past couple of years. Gladys said she and her neighbors are afraid to go to the grocery store, just two blocks away.

“The neighborhood hurt itself,” said Kenneth Wright, who has lived in his home across from the Weathersbys since 1955. “Everybody calls it a ghetto, but you make it a ghetto.”

Wright said he is proud of the pocket of community he and his neighbors maintain on his block, and that is true of a number of areas within Lindsay Heights.

Larger-scale efforts a few blocks south were led by the Walnut Way Conservation Corp., which began tackling crime and renovating properties about 15 years ago.

Since then, 65 new homes have been constructed and occupied in the area, with plans for more than 50 more in the works. Walnut Way worked with neighbors to build gardens and cultivate orchards, and claims to have nearly eliminated crime from the blocks it targeted.

“There are places here that are like the suburbs,” Wright said. “But it’s up to the community.”

Fighting crime is at the top of the Weathersbys’ priorities, specifically chasing drugs and gangs from the area by working with the local police district.

Gladys and her husband worked to get police officers to walk through the area more regularly. They also are trying to find ways to get security cameras installed throughout the neighborhood, but are running into trouble funding the project.

Ald. Russell Stamper, who represents the area, said there are city programs to help them out, though.

They have been working to convince their neighbors to take advantage of the Lindsay Height’s Tax Incremental District loan fund.

Stamper has been hosting community meetings to explain that the fund offers money to residents to fix up their homes. The loans are, in effect, grants, as they are forgivable as long as the borrower lives in the home for five years. 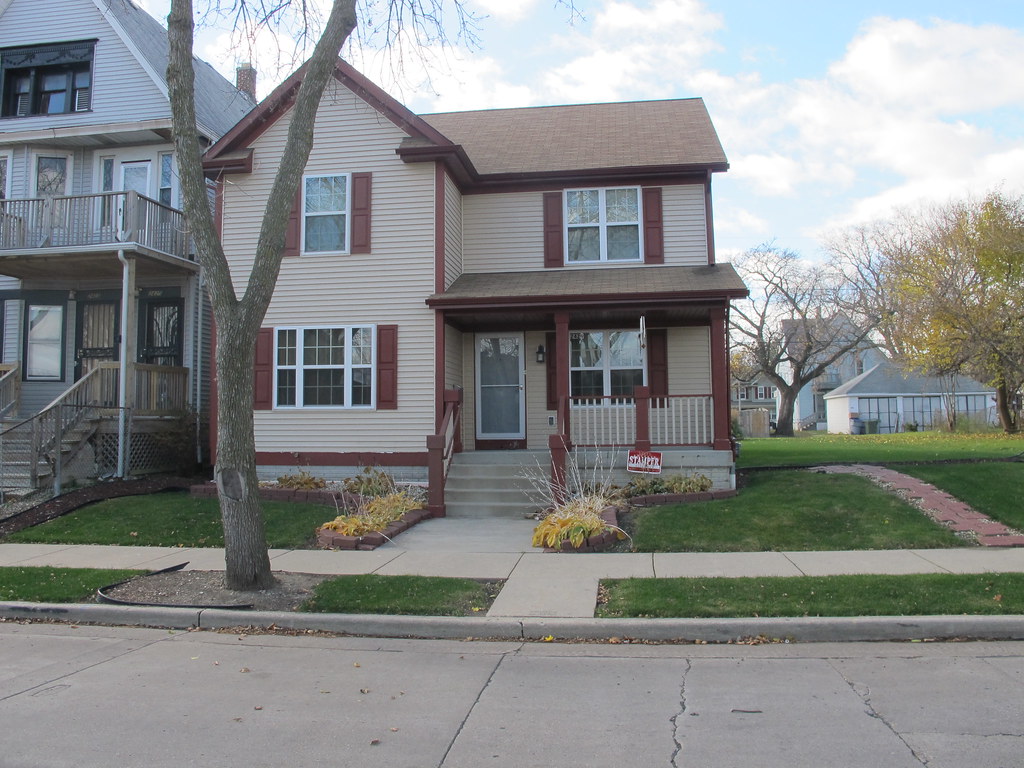 Home of Gladys Carroll-Weathersby and John Weathersby on the 2400 block of N. 16th Street.

Since the fund was created in 2001, more than 190 Lindsay Heights homeowners and renters made $1.8 million worth of repairs to their properties. An additional $600,000 for loans of up to $10,000 was made available this summer, and the city already has plans to allocate the 60 loans to specific residents, according to Sam Leichtling, program director at the city’s Neighborhood Improvement Development Corp.

“There was a huge rush of applications,” Leichtling said, noting that he is planning to create a waiting list in case some projects don’t work out.

The city also offers $3,000 matching grants through NIDC for resident-led projects to improve the neighborhood and Mayor Tom Barrett put $11.7 million in next year’s budget for the Strong Neighborhoods Plan to provide resources to residents citywide.

Until then, John and Gladys will be working with their neighbors and inviting them to information events in their home to make sure they are aware of the resources available to them.

In 2006 when John Weathersby and Gladys Carroll-Weathersby decided to build a home in the Lindsay Heights area, the neighborhood was in the midst of a major redevelopment, led by the City of Milwaukee and the Wisconsin Housing and Economic Development Authority.

Most of the redevelopment took place on the south side of Lindsay Heights, where Kuhs Quality Homes Inc., a private real estate developer based in Hales Corners, tore down ruined homes and built more than 50 houses on the area’s vacant lots.

Development was halted when the 2008 recession hit, though, because potential homebuilders were unable to get loans to build new properties.

Cindy Kuhs, co-owner and president of Kuhs Quality Homes, said that while most of the vacant lots were developed before the economy crashed, major projects that were supposed to boost property values in the area were stalled. That included neighborhood developments such as Josey Heights, just west of I-43 on Lloyd Street, and Walnut Circle, near the intersection of 20th and Walnut.

Over the next few years, people such as the Weathersbys who invested their money in new houses saw values plummet and the chance to sell their home disappear.

“They gave us this hope and dream, and now we’re stuck,” Gladys said.

She said the situation caused a lot of conflict in her family, almost pushing her marriage to the brink of divorce. Ultimately, she and her husband accepted reality and decided to focus on making their investment worthwhile.

“This is my home now,” Gladys said.

The couple is now working with neighbors to maintain property values in the area, including buying and renovating a house across the street that they will eventually put up for rent.

Other people in similar situations were unable to continue to invest in their homes.

“There were a lot of people who just didn’t keep up their property,” Kuhs said. “They’re still underwater.”

Kuhs said she remains close to a couple of people in the area, and she is keeping an eye out for possible developments she could resurrect, including projects such as Josey Heights.

At a town hall meeting at Washington High School, 2525 N. Sherman Blvd., in November, Alderman Russell Stamper said the development is going to happen, but that the timing is based on the market.

Officials in the Department of City Development said they have had inquiries about developing the properties, but have not finalized plans to develop any of the lots yet.

“I think the city needs to put in some funding to get people interested in the area,” Stamper said.

Milwaukee Neighborhood News Service, in collaboration with the Diederich College of Communication senior journalism capstone course, tells the story of how five central city communities are working to overcome sometimes-daunting obstacles to stabilize their neighborhoods after the foreclosure crisis.