You are here: Home / News / Community / Washington Park marches for end to gun violence
Share this... 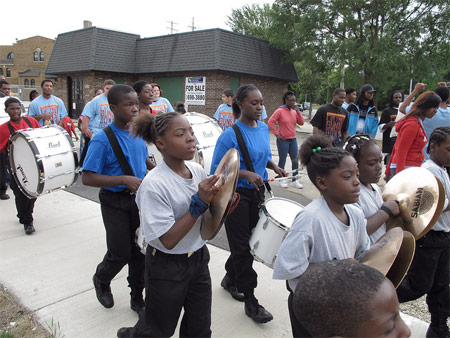 The Paradine Drumline and other marchers encourage people to attend the Put the Guns Down Festival in Washington Park. (Photo by Marissa Evans)

Nearly 50 marchers clad in a mixture of light blue and black shirts chanted “Put the guns down, bring peace and love” as they marched through the Washington Park community at the seventh Annual Put the Guns Down Festival.

The neighborhood event, sponsored by the League of Young Voters Education Fund, brought together volunteers and locals of all ages for a day of solidarity against gun violence.  In addition to the march, the event included a free picnic, face painting, live performances from local artists and information on how to vote.

“We’ve made it cool to say you don’t have to pick up guns. That’s not always the case for when you work with youth in an inner city area,” said Robert “Biko” Baker, the organization’s executive director.

Baker said he has seen some young people attending the event since they were 7 years old. The best part is that it’s a youth-led event that’s positive but drives the point home so it’s “not vanilla for these kids,” he said.

Trey Bates, 18, has been volunteering at the festival since he was 12. He said over the years he has lost loved ones of all ages to gun violence.

“I’m getting tired of people getting killed over petty things,” Bates said. 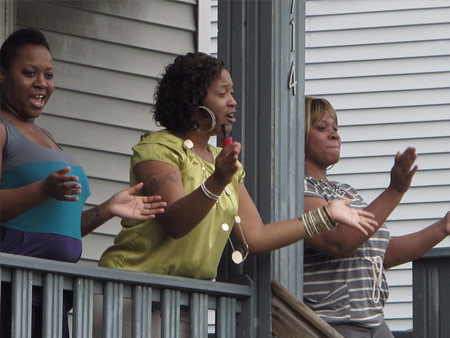 Locals come out onto porches to cheer and chant with the marchers as they go by.(Photo by Marissa Evans)

During the march up Galena Street and back down Lisbon Street to the park, locals came out onto their porches and poked their heads outside doors and windows to watch the marchers and listen to the Paradine Drumline beat its drums while younger members clanged cymbals in time to the rhythm. At busy intersections, the group would disperse to four corners and chant, “Honk your horn for peace, honk your horn for justice!”

Standing on the corner with her sign that said “Live by the gun, die by the gun” 10-year-old Zakenzia Hicks said she was proud to have been part of the march.

“I feel like God was happy about what I did,” Hicks said.

The marchers stopped on Lisbon Street for a moment of silence near where Sharon Staples, a mother of seven and pregnant with twins, was killed in August for refusing to give her purse to robbers. The assailants shot her in front of her 13-year-old son. Three suspects were arrested. 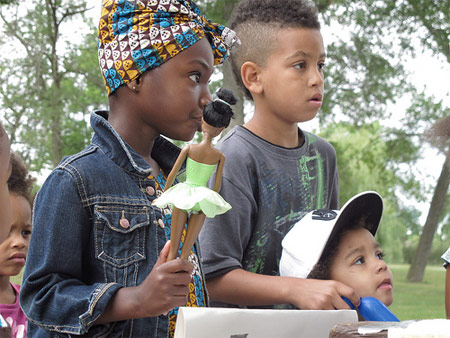 Children wait in line for face painting during the festival. (Photo by Marissa Evans)

Cassandra Thornton, 34, an area resident, said this was the first time she attended the festival but she plans to attend again next year. As a parent she’s against gun violence and wants to do her part,” she said.

“We (parents) need to be more vigilant,” Thornton added. “If we had more things to get students involved in we could lead them down a different path.”