You are here: Home / News / Community / Milwaukee delegation heads to Detroit for Equity Summit 2011
Share this...

In the world of nonprofit community organizations and neighborhood development, a relatively new concept is gaining momentum: “collective impact.” About 40 individuals from a Milwaukee-area organizations and agencies will have a chance to learn for themselves what the term is all about as members of a delegation to Equity Summit 2011.

Gina Stilp of the Zilber Family Foundation (center) is flanked by Will Seburn (left) and Dan Adams of Layton Blvd. West Neighbors. (Photo by Sue Vliet)

The Equity Summit is the fourth such gathering sponsored by PolicyLink, a national research and action institute with the goal of advancing economic and social equity.

The gist of collective impact is to organize leaders from all facets of the community – government, businesses, and nonprofit organizations – to address a particular issue, such as education reform. Specific goals for improvement are set, and the participants communicate regularly to both pursue and update the goals and share the, hopefully positive, results. Collective impact was the topic of a recent symposium held sponsored by LISC and Marquette University Law School.

The Milwaukee delegation will be practicing some aspects of collective impact even before they get to Detroit, by interacting with other neighborhood development and community organization professionals on the way there and back.

Sarah O’Connor, project director of the Milwaukee Childhood Obesity Prevention Project said she is eager to gain information not only from the conference itself, but also from the other Milwaukeeans attending.

“I’m excited that we will have time to get to know more about the work of our fellow attendees,” O’Connor said. “People bring so many different skills and backgrounds, we need all of those people at the table to make an impact on these big issues in order to move our country forward.”

O’Connor added that “the strength of going as a delegation is that we can come back energized by what we learn, [and have] stronger connections to each other, so that we can work together even more in Milwaukee on these really complicated issues.”

Stephanie Allewalt, neighborhood planner at Agape Community Center in Thurston Woods, also is optimistic about what she’ll bring back to Agape and the wider Milwaukee community.

“We’ve been talking a lot in the community development realm about centralizing our efforts,” Allewalt said. “This [the summit] will help us explore exactly what that means for us.”

Taking the more global, comprehensive view advocated at the recent LISC symposium and expected to be a major topic in Detroit creates a lot of opportunities, according to Allewalt, “but we have to find that balance” between the collective impact approach and our immediate neighborhoods, she said.

“Within our considerations to centralize community development efforts,” Allewalt said, “how we find ways to continue to celebrate the differences in our neighborhoods is going to be an important component.”

Todd Clausen, director of the Neighborhood Data Center Program at the Nonprofit Center of Milwaukee, hopes to ”connect with some of the other researchers like myself across the country, to learn from them the best practices,” he said. “That’s the kind of information community organizations really need in order to do what they do better.”

“We do a great deal of research, census mapping, demographics and help nonprofits in strategic planning,” Clausen explained.

“As a researcher, I can really see that in the university setting, you get your research published, but you really don’t have any idea how that affects the community,” said Clausen, who once worked at a university. “In the nonprofit sector, I can do the same research and really see how that effort has some impact on the community.”

Bess Earl, a coordinator for Washington Park Partners and former AmeriCorps member, said she is excited about bringing back ideas related to access to healthy food for the neighborhood, because it is considered a “food desert.”

Earl noted that there is not a single grocery store in the area served by Washington Park Partners, from 30th to 47th St. and Highland to Meinecke. “This area has one of the highest densities of convenience stores in Milwaukee,” Earl added. 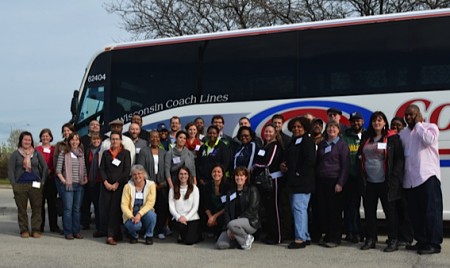 “I grew up in a smaller town, in Waterford, with lots of agriculture nearby. So, I’m concerned now with bringing agriculture to the city,” she said. “It’s really my passion in life.” Allewalt, of the Agape Community Center, summed up one of the over-riding themes of the Equity Summit. “If we in nonprofit organizations in the community are not working on revitalizing neighborhoods, who is?”