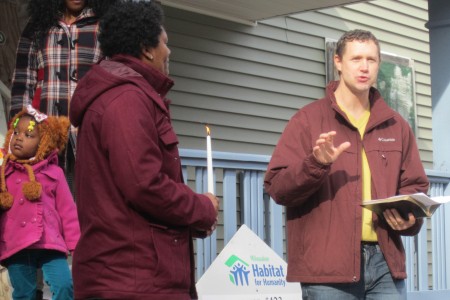 At the end of Brian Sonderman’s first week as executive director of Milwaukee Habitat for Humanity, his son asked, “Have you built a house yet?”

When Sonderman replied ‘no,’ his son said, “Then what are you doing?”

Ten months later Sonderman was able to tell his son that the non-profit organization had built 40 new homes around Milwaukee.

“The best part of what I do is being able to see people move into their homes or receive critical repairs so that they can stay in their home,” Sonderman said.

The organization renovates existing homes through its repair ministry, “A Brush with Kindness.”

Sonderman said it takes about a year for homeowners and volunteers to complete a home.

Many of the people helped by the organization are the first homeowners in their family for generations, he said.

In addition to the home construction and renovation services, the Milwaukee affiliate also operates a resale store in Wauwatosa. The store carries donated overstocked, discounted, new and used building materials.

Every year upwards of 15,000 people volunteer with Milwaukee Habitat for Humanity. The organization works in some of the most economically disadvantaged neighborhoods in Milwaukee, and requires new homeowners to be agents of change in their community.

“What we’re doing is asking them to be right on the front lines of bringing about transformation to their block and in their neighborhood,” Sonderman said.

Milwaukee Habitat for Humanity has built more than 400 homes around the city in its 27-year history. Sonderman said it will focus specifically on the Park West and Washington Park neighborhoods in 2012.

“We want to really focus our energies on a smaller geographic area to have a greater impact,” he said. “What I do is I try to put the right people in the right places so that we can serve more and more families every year.”

Sonderman said he draws upon his experience as a pastor to spread the Christianity-based mission of Habitat for Humanity. Although the organization is rooted in the Christian faith, he said, it serves people regardless of faith.

Related Post: Mother of eight makes Habitat home her own

Tanicha Suggs, a mother of eight, has settled into her new home in the Harambee neighborhood, where she moved in December. The house is one of five on the block built by Milwaukee Habitat for Humanity.
[read the post]