You are here: Home / News / Education / Young Scientists headed in the right direction
Share this... 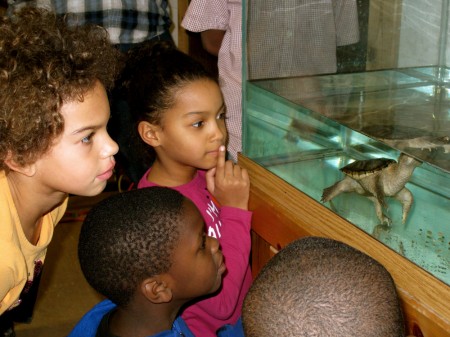 Mike Zang reached into a brown paper bag and pulled out a fistful of seeds. He explained that the seeds were samples of various plants native to Washington Park.

“They’re really dry,” said Zang, a community program educator at the Urban Ecology Center.  “I want to start putting them in jars.”

The bag was among 75 just like it, all crammed onto a few tables in the center’s dim basement in the park. With his bomber hat’s floppy ears framing his face, Zang said the group of young scientists had been collecting seeds to preserve and plant in the spring as part of an afternoon drop-in program for children.

The Urban Ecology Center in Washington Park offers the Young Scientists Club to teach children in the community about nature and social responsibility. It also aims to expose the children to new environments, especially those who never have had the opportunity to leave the city, Zang said.

“The mission is to educate people in the city, and anybody really, about the benefits and the wonders of being outside,” he said. “Connecting with nature, connecting with your parks, be it anywhere.”

The cost to join is only $5, but Willie Karidis, the center’s branch manager, said that if children can’t afford it, the center will make special arrangements so they don’t miss out.

“When I first started here, it was just me running the program by myself,” Zang said. Since then, the program expanded to include more volunteers and staff members, he said. “Now that we have more people, we’re doing things like taking the kids on field trips on Saturdays.” They have visited apple orchards, various parks around the city and the zoo.

“You could be in downtown Milwaukee, or you could be in Hudson Bay, Canada, you know? It doesn’t matter where you are, to be able to see the place as wild, and to see the beauty of it – I think that’s really the core of the Urban Ecology Center,” he said.

“It was sort of serendipitous,” he said. “I didn’t really ever plan on coming to Milwaukee or working for this organization. I just stumbled upon the volunteer corps and then gave it a chance.”

The center offers programs other than the Young Scientists Club, from winter equipment rental –snowshoes, cross-country skis and ice skates – to summer camps.

The programs allow kids to get outside their normal environment, Zang said. “It helps point them in the right direction, and just puts them into a really good, positive environment.”

At 14, Darrin Madison is too old to be a member of the Urban Ecology Center’s Young Scientists Club any more, so he returned as a volunteer.