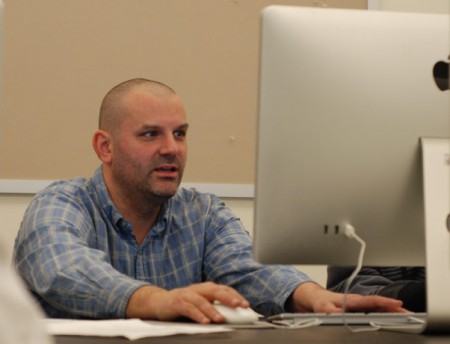 Jon Brown, a local artist and educator, is the lead artist and mentor at ArtWorks For Milwaukee, where he works to give students who underperform in high school the skills to succeed.

Brown teaches at Milwaukee Institute of Art and Design and Milwaukee Art Institute, so when he says his ArtWorks students “are some of the best,” it means something.

“The students are great. They come with a lot of great experience and they do live in high-risk neighborhoods,” said Brown. “It is really rewarding to me to be able to sit down and teach them a little bit of the new software and get their ideas on paper.”

Brown began creating art at a young age. His early interest led him to a career in art and teaching. He works closely with the eight paid interns to develop creative skills as well as job skills. Currently, they are producing anti-drug and anti-violence campaigns that will be distributed in their respective neighborhoods.

Domonique Whitehurst, a high school student with a passion for art and creativity, began his internship with ArtWorks for Milwaukee in the fall. Whitehurst said he has learned a lot from the program and from Brown, his mentor.

“Jon is a great guy,” Whitehurst said. “I came in knowing a little and now after his help and direction I have acquired a lot of creative and life skills that I can use in the future.”

Brown said his favorite aspect of the job is working with students to help them develop their ideas.

“They don’t have a lot of opportunities in public schools to do artwork, so this gives them a nice outlet.”

Brown is impressed with the students’ abilities and willingness to learn, which he attributes to the internships’ fast-paced beginning.

He said by sitting down with the students every step of the way he is able to see their desire to improve and make a difference. Brown added that the arts community and the public at large could do a great deal more for Milwaukee youth.

“There is a large population of young people that are in great danger of not succeeding because they don’t have the support they need,” Brown said.

High school student Domonique Whitehurst is one of eight interns at ArtWorks for Milwaukee worked on anti-drug and violence campaigns this fall. The semester-long program strives to foster collaboration and promote the arts, while training students for careers.

About Andrea Anderson and Rebecca French