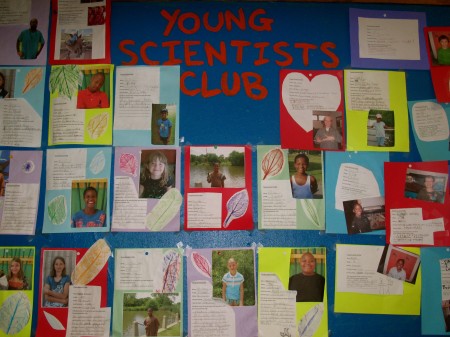 Members of the Young Scientists Club were buzzing in anticipation of a field trip to the Milwaukee County Zoo for a behind-the-scenes tour of some of the exhibits. As they were preparing to leave, Darrin Madison walked through the door of the Washington Park Urban Ecology Center and a few of the young scientists ran over to greet him.

The kids lined up at the door, and then marched outside toward the buses waiting to take them to the zoo. The engines rumbled in the parking lot. Darrin helped the kids climb aboard, and got in after them. They were all smiling.

Madison joined the club four years ago when he was 10, but is now too old to attend as a student. So “I decided to come back and volunteer, because the Ecology Center is kind of like a part of my life,” he said. “I enjoy it here.”

Madison, a freshman at Rufus King High School, relishes his new role. “I like being a volunteer a lot more, because you get a little more authority,” he said with a smile.

The teenager credits the center and the club for turning him on to nature.

The Urban Ecology Center opened his eyes to problems in the environment, he said. “It brought me to a lot of new programs and organizations.”

When he was a member of the club, Madison appreciated the way volunteers made things easy for kids to understand. “At certain ages, you only can process certain amounts of information, but they (increased) the comprehension level,” he said.

As a volunteer, Madison likes hanging out with the kids. He particularly enjoys the winter programs, including sledding and ice skating. He added that “every year we do a few campfires on the island.” (The island is in the lake behind the Ecology Center in Washington Park.)

Madison said he learned a great deal about ecology through the program, especially about invasive species and how they can ruin balanced natural environments by overwhelming native plants and animals. But he still had fun — he even met four of his best friends there.

“If anyone is interested in coming, we would love for you to come visit us,” he said. “I know I would, because it’s nice to meet new people. We would welcome you with open arms.”

The Urban Ecology Center created the Young Scientists Club to teach children in the neighboring community about nature and social responsibility, and expose them to new environments and experiences.