You are here: Home / Home / Carousel / Next Door Foundation is “home away from home”
Share this... 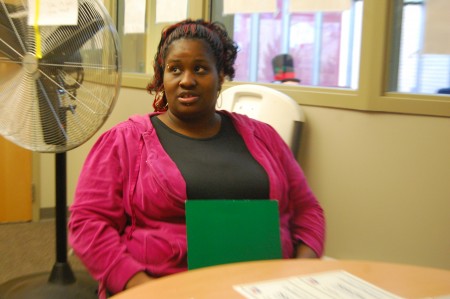 Stephanie Williams knows that education is necessary for her and her four children to accomplish their goals and succeed in life. So she is grateful for the services offered at the Next Door Foundation in the city’s Metcalfe Park neighborhood.

Not only is her youngest daughter enrolled in Next Door’s Early Head Start program, which aims to help children transition into Milwaukee-area elementary schools, but Williams herself is in the foundation’s GED class. The education and social service center also provides on-site pediatric services, daily meals and help for children with disabilities.

“Being here is convenient,” Williams said. “I take my daughter to class, go right upstairs and do my GED from 9 to 11:30, and then I come back from 1 to 4 and she’s out of class. I don’t have to go across town and rush back to get her. Everything is here. Being here is beneficial for furthering your education as well as being involved with your child’s education.”

Williams said she discovered Next Door during an open house as she was taking her older children to Clarke Street Elementary School registration in September.

“We walked in and I just fell in love with it,” she said. “I did a tour that day and I was excited about everything that they had to offer.”

Once she saw what Next Door could provide her daughter, and how much she loved being in the building, Williams seized the chance to continue her education. She said that coming back to the classroom after being gone was difficult but that having good teachers helped.

“Our instructors, they’re so passionate. It’s not just a job for them,” she said. “They go the extra mile, pulling you aside and tutoring you.”

She said that she recently had seen a lot of progress in reading, enough that she is confident she can pass the test. Her plan is to focus on math so she can pass that test and get her GED diploma in May.

“My future goal is, once I get my GED and all the training that they are giving me now, to become employed at Next Door,” she said. “Even after my child is of age that she can’t attend here, I will still come back and volunteer with anything that they are doing. I totally support them.”

Williams is also active with Next Door’s parent committee.

“They involve you in everything,” she said. “They want the parents to participate and to be involved.”

Williams also praised Next Door’s staff, saying “If they don’t deal with it first-hand, they give you support on where to go.”

She added: “If I would’ve known about Next Door Foundation when my (older) kids were going to school, they would’ve been here. It’s a lovely facility, they don’t turn anybody down and Next Door is a prime example of no child left behind.”

Next Door Foundation’s Educare program offers “a prep school for low-income kids” in one of Milwaukee’s poorest neighborhoods.
[read the post]

About Alec Brooks and Ryan Ellerbusch