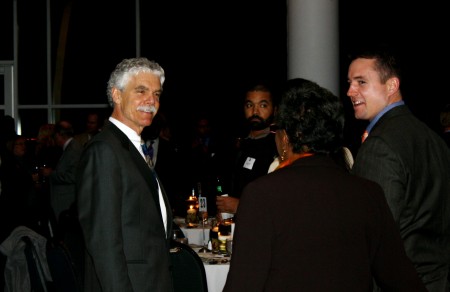 “The idea is to gain a pool of money that we can then return to our customers to help buy a home,” said Schmidt. The loan fund would assist with home improvement, mortgages and home repair costs.

Ries added that the organizations are currently working to develop and identify investors and financial institutions in Milwaukee to contribute to the loan fund, which he estimated would make $10 million available to homeowners.

“Through [Select Milwaukee and LISC’s partnership,] we can get together to talk about what kind of systematic changes need to happen,” said Dawn Hutchison-Weiss, director of communication at LISC, “and how to work more closely with the city to help them address the foreclosures that they have.”

To access the loan fund, potential borrowers would  fill out an application with Select Milwaukee. The loan fund is projected to be available this spring—when people are thinking about home improvements, according to Ries.

LISC, located at 660 E. Mason St., provides Select Milwaukee with grants and loans to support its efforts in Clarke Square, Lindsay Heights, Layton Boulevard West, Washington Park and Harambee. It also serves as an intermediary, connecting Select Milwaukee to banks and investors in the area.

“If we need an introduction to a person or organization they (LISC) are helping us to build those relationships,” Schmidt said.

Ries said Select Milwaukee has received national acclaim for Walk to Work, an employer-assisted housing program. The project works with different employers in the area to help their employees find and purchase homes in the area.

“It is a concept that other cities have replicated but I think [Select Milwaukee] truly has developed a certain competence and certain expertise in that area,” Ries said.

Select Milwaukee is one of 15 finalists nominated for the 2012 Milwaukee Awards for Neighborhood Development Innovation (MANDI). The organization is up for the Harris Bank Cornerstone Award, which honors an individual or organization with long-standing commitment to a neighborhood and has been effective over time, according to LISC’s website.

The MANDI award winners will be announced at a dinner on March 28 at the Pfister Hotel, 424 E. Wisconsin Ave.

Chris Boston, director of sustainable communities at LISC, said it feels good to see Select Milwaukee nominated for the award because dedicated staff members such as Executive Director Raymond Schmidt and Associate Director Irma Yépez-Klassen are so committed to their mission.

When it comes to agency excellence, “they push the envelope,” he said.

Since Select Milwaukee was established in 1991, it has provided homeownership education and foreclosure prevention in city neighborhoods. The nonprofit organization, which has served about 2,000 Milwaukee residents, recently celebrated its 20th anniversary with partners, clients and staff.
[read the post]

About Heather Ronaldson and Erin Caughey