You are here: Home / Home / Carousel / Mother of eight makes Habitat home her own
Share this... 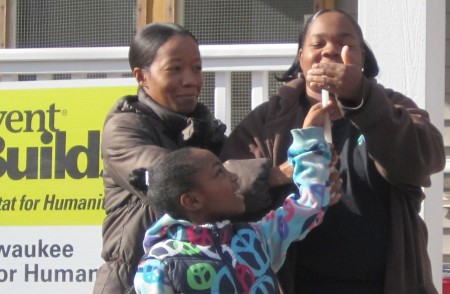 Tanicha Suggs moved into her new house in the Harambee neighborhood in December, one of five on the block built by Milwaukee Habitat for Humanity.

Since then, she has painted nearly every room in the house.

“I’ve been looking at white walls all my life, so the first thing I did when I moved in was paint,” Suggs said.

“The bathroom is teal blue and brown, the kitchen is caramel colored, the living room is mustard and one of my son’s rooms is red and blue—Spider Man colors.”

Suggs had been living in public housing until 2009, when she decided to move in with her mother, along with her eight children, and start saving for a home of her own. She began the Habitat for Humanity homeownership program in June 2010 after hearing about it from her cousin, another Habitat homeowner.

She made the move to better herself, and it is paying off, Suggs said. The Habitat program gave her stability, comfort and confidence. Thrivent Financial for Lutherans, a Habitat for Humanity partner, helped with financing for the new residence.

Suggs invested her own “sweat equity” by helping build her own home and others around Milwaukee, including all the Habitat houses on 1st Street. She said working with volunteers and other prospective homeowners taught her not just how to build a house, but how to maintain it. “It’s a process, but it is a great program,” Suggs said. “I endured and enjoyed every bit of it.”

Suggs said she met her new next-door neighbor while building a house in another neighborhood. The neighbor recommended that Suggs move into one of the 1st Street homes, and she is happy she did. “We build friendships now,” she said.

She hopes the five Habitat homes on a single block will help build up the Harambee neighborhood. “I wish it could have been a whole sub-division but this is great,” Suggs said. “I would like to see the community come together.”

With the help of more than 15,000 volunteers, Milwaukee Habitat for Humanity has built 40 homes this year, many for first-time homeowners.
[read the post]