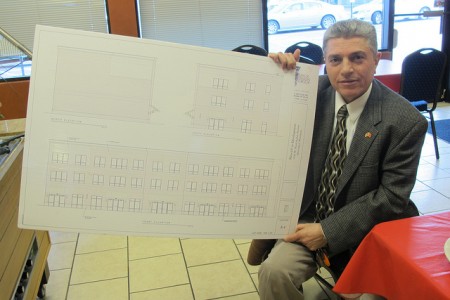 By late spring, construction of a $3 million mixed-use building is expected to begin on West Fond du Lac Avenue. Within the last year, six new businesses have opened along the business corridor near Fond du Lac and North Avenue in Lindsay Heights. Local experts are cautiously optimistic that these projects will spur economic development in the community.

The sale of several city-owned lots to Nafiz Efe, owner of Efe Building and Remodeling, was approved by Milwaukee’s Zoning, Neighborhood and Development Committee in January and the Common Council approved the committee’s decision in February. The lots, at 1922, 1924-26, and 1932-38 W. Fond du Lac Ave., were sold for $15,000.

The three-story building will include a 6,600-square-foot first floor with four to six businesses. The second and third floors will have 16 one-, two- and three-bedroom affordable units starting at $550, $750 and $900 per month.

Common Council President and 15th District Alderman Willie Hines supports the project. “Mr. Efe’s project is another important step in the right direction for the local community, 15th District and City of Milwaukee,” Hines said. “His development builds upon the investments made by the City of Milwaukee and the local community over the past few years.”

In 2006, Johnsons Park Lofts, the first mixed-used building in the area, opened its doors. The $5 million project included 24 two- and three-bedroom apartments. It continues to have a waiting list for apartment units.

The 15,000-square-foot first floor has gone through several businesses over the years. Currently, it houses Superstar Childcare, as well as Impact Seven, a business-lending firm, and National Change Organization, a telemarketing company that makes calls for political candidates. Each business has been at the Johnsons Park Lofts, 1862 W. Fond Du Lac Ave., for less than a year.

“I think it’s beneficial to have us here,” said Todd Hutchison, co-owner of Johnsons Park Lofts and Wisconsin Redevelopment. “There’s an economic and security benefit. Having businesses here helps to spread the good word about the community.” 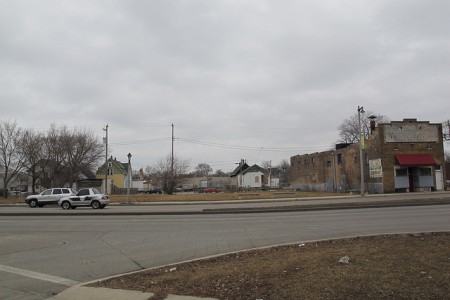 When it comes to funding the project, Sue Eick, president of Legacy Redevelopment Corp., 1200 W. North Ave., said it’s too early to tell. “I think in general it would be challenging for anyone, including seasoned and experienced developers in the city of Milwaukee, to obtain financing,” she added.

However, Eick said that Legacy Redevelopment and other organizations are working with Efe to find funding. “It would be an incredible benefit to the neighborhood as it would include some new retail businesses and some quality affordable housing,” said Eick.

“The development would a have major impact on this community,” said Jacqueline Ward, managing director of North Avenue/Fond du Lac Marketplace Business Improvement District (BID) 32. Ward hopes it will be a catalyst for other businesses to come to the area. “I am optimistic,” she added.

A half dozen new businesses have come to the BID within the last year, according to Ward. They include Sweet Black Coffee, a coffeehouse at 2033 W. Fond du Lac Ave., Jesse’s Hawg Pen, a Harley-Davidson motorcycle repair and detailing shop, 2256 W. Fond du Lac Ave., and a pharmacy housed in the Shafi Plaza at 1919 W. North Ave.

Ward is particularly excited about the value Efe’s project and the 2 Wheel Café will bring to the community. The café, at 2501 W. North Ave, was recently approved by the city. Owned by Danyel and Virgil McNeil, 2 Wheel Café is expected to open by the end of summer. It will serve wraps, soups, sandwiches and coffee, catering to the morning and afternoon crowd.

Danyel McNeil explained that there aren’t a lot of non-fast-food options in the neighborhood. “Jake’s is a staple of the community, but you can’t eat corned beef every day of the week,” she added. The McNeils live in City Homes, a community that borders Lindsay Heights.

Efe plans to complete construction by next summer. He is pursuing funding from public and private sources.

Businesses Efe hopes to attract include professional services and retailers, such as printing, computer technology, tax accounts and insurance, he said. “I have already received five letters of interest from businesses,” he added.

If the project is completed and is a quality development with good tenants, Hutchison said it would benefit the area. “Bringing additional residents into the community helps to increase the spending power of the neighborhood,” he added,  “and bringing in additional retail or other office users helps to increase the services available to the community.”