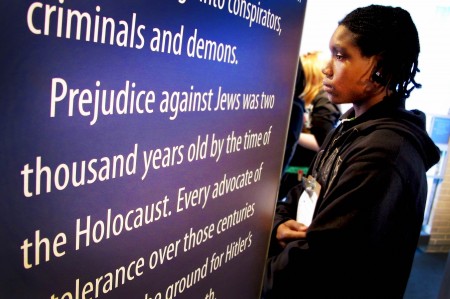 Javaris Bradford, 18, and his classmates at NOVA High School can’t wait to start on their latest school project — a public exhibit about the Milwaukee civil rights movement, opening April 20.

The students are collaborating with Arts@Large, a program that links community artist educators with teachers and students in Milwaukee Public Schools. NOVA (Northwest Opportunities Vocational Academy) High School, 2320 W. Burleigh St., is a Milwaukee public school that serves students in grades 7-12, according to MPS.

Bradford and his peers have gone through the University of Wisconsin-Milwaukee archives, visited numerous museums and talked with local civil rights activists in order to become historians and docents when the exhibit opens, according to NOVA teacher Kelly DiGiacinto.

“They cannot always be taught in a classroom setting,” said DiGiacinto, who leads the team of students. “They have to be out in the community.”

Their latest stop was the Jewish Museum Milwaukee, where they took notes on the art of leading guided tours.

Historian and Museum docent Jane Avner said the museum was created in a manner that allows the wider immigrant community and African Americans to relate to the Jewish experience in Milwaukee.

She advised the students not to target their exhibit strictly to African Americans. “The students should try and think larger,” she said. “They want to invite everyone to learn about the civil rights experiences.”

Bradford said he did not know prior to the museum tour that the Jewish community in Milwaukee had close ties with the African American population.

“The Jewish community was very influential in doing things that were politically related to fair housing for African Americans,” he said. “Also, one of the places that I’ve eaten at for a number of years, Jake’s Deli, I didn’t know that was a Jewish-owned restaurant, so that was pretty cool to find out too.”

The students’ experience at the Jewish Museum was invaluable, DiGiacinto said, because it showed them how to capture personal and historical narratives effectively.

The exhibit will be at Gallery@Large, 908 S. 5th Street, until mid-June. “A lot of people will be educated,” said Bradford. “I’m excited to teach people things.”