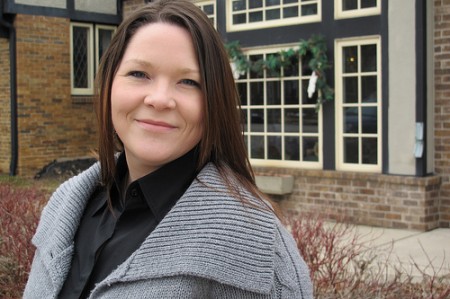 North Point Lighthouse Charter School, a new charter school in the Thurston Woods neighborhood, is recruiting teachers and students for its opening on Aug. 20.

The school initially will serve students from K4-4.

Hammernik and Denna Blue-Miller, coordinator of community outreach and student recruitment, have been recruiting students in Thurston Woods and surrounding communities, including at facilities such as Florist Avenue Lutheran Church, Agape Community Center and New Life Academy of Learning.

“We chose (ZIP code) 53209 as the area for the school because of the IFF study,” said Hammernik. IFF does research and other service for nonprofits. Hammernik said the study found a high number of children in the area and a low number of quality schools.

North Point is chartered by the City of Milwaukee. The cost of education is $7,775 per student, the same amount of funding for Milwaukee Public Schools, and is funded by the State of Wisconsin 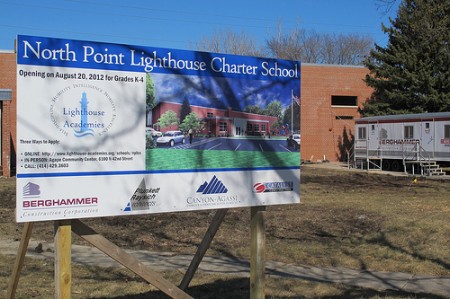 A converted warehouse that will house the school is under renovation. (Photo by Kenya C. Evans)

New schools in Tulsa, Okla, and Milwaukee will bring the total of Lighthouse Academies to 21. Most serve low-income, minority students. Named after a Milwaukee lighthouse at 2650 N. Wahl Ave., North Point plans to open this fall with 260 students.

Renovation of North Point’s site, a two-story warehouse at 4200 W. Douglas Ave., has already begun. The school will open the first floor this school year, and will expand as a grade is added each year until it reaches the 12th grade. The first Lighthouse school opened in the Bronx in 2004. It is the only K-12 Lighthouse school.

North Point’s model is based on rigorous academics, arts-infused learning and social development, according to Hammernik. North Point teachers will use the arts to engage students and teach curriculum, she added. Hammernik said she hopes to establish partnerships with First Stage Theater and Milwaukee Art Museum.

Hammernik, a Milwaukee native, came from New Orleans, where she was assistant principal at New Leaders for New Schools.

“It was a joy to go to school every day, but it was a suburban school with an 85 percent proficiency rate,” Hammernik said. “It wasn’t fulfilling in the way I needed it to be — I needed to be doing something about the proficiency gap.”

She began her career as a paraprofessional at Morgandale Elementary School in Milwaukee, and was selected by International Foundation for Education and Self-help to teach in Ethiopia at a teacher training college for a year. She hadn’t planned a career in education, but once she began to work with kids, she discovered her passion. Hammernik holds a bachelor’s degree from Alverno College in Elementary Education, and a master’s degree from University of Wisconsin-Milwaukee in Cultural Foundations in Education.

Blue-Miller was formerly business service manager at Central City Cyberschool of Milwaukee. She is earning her master’s degree at University Wisconsin-Milwaukee in Curriculum and Instruction.

Lighthouse Academies plans to open a second charter school in Milwaukee in the 2013 school year called Breakwater, named after another Milwaukee lighthouse. Lighthouse administrators are working to identify a location, according to Hammernik. “It will be in a high-need area,” she added. “That’s what Lighthouse does; they go where there’s a need.”