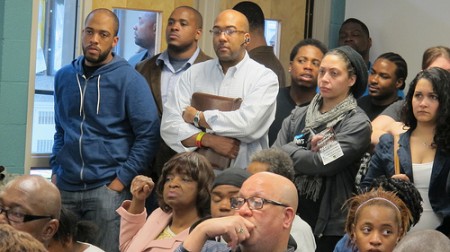 More than 100 community members gathered to hear candidates in the April 3 elections debate at the Northside YMCA in Lindsay Heights this month.

Jobs, transportation and public safety were hot topics during the forum.

“There are far too many people in this community that don’t have jobs where they can support their families,” said Mayor Tom Barrett as he addressed successes and failures during his eight years in office.

Barrett said he planned to improve the quality of life that has suffered due to the continual loss of jobs in Milwaukee during the last 40 years. He pointed to the Menomonee Valley as an example of success. “In the last eight years we’ve added 4,000 jobs to that area,” he said, noting that a half dozen companies are now located there, and the jobs pay enough for employees to support their families. 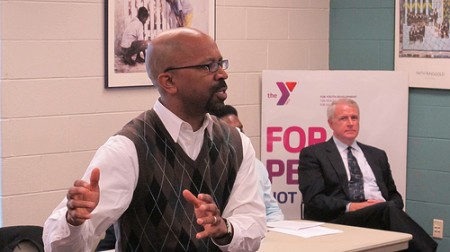 Before responding to each question, Edward McDonald, Barrett’s opponent, asked the crowd to chant “Build Milwaukee.” His “Build Milwaukee” strategy is to grow the city by capitalizing on its assets, and to reinvigorate underdeveloped areas.

“I understand the issues,” said McDonald, a University of Wisconsin-Extension faculty member whose background is in public administration, community planning and social development, according to his website.

McDonald said he plans to focus on 11 key issues, including public transportation, better youth and senior services, and collaboration with suburbs and regional communities.

After the forum, Sherwin Hughes, a political consultant who attended the event, said, “Everybody agrees a lot needs to change in the city. There’s a lot of work to be done, and the bottom line is which of those candidates will be able to accomplish all the work that still needs to be done.”

Jayme Montgomery-Baker, Wisconsin state director for the League of Young Voters, said what struck her was not the candidates’ remarks, but those who attended the event. “The main point was our community really being involved and engaged in local politics,” said Montgomery-Baker. “It seemed to be a broad group of people, both young, old and everything in between, so just to see that spoke volumes to me outside of what the candidates talked about.”