You are here: Home / Home / Carousel / Veterans feel at home in housing built for them
Share this... 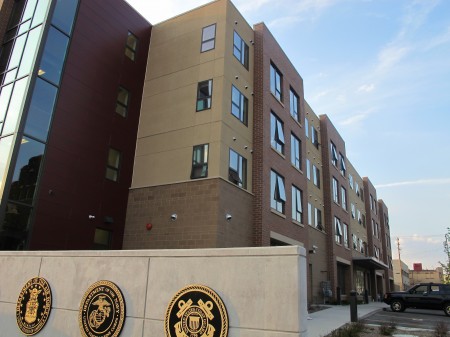 U.S. Army veteran Marty Armstrong was living in Tennessee when he first heard about Veterans Manor Apartments in Milwaukee’s Concordia neighborhood. Despite the distance, he applied to live in one of the 52 single-unit apartments available.

“It’s just a blessing — that’s all I can say — to come from some 500 miles away,” said Armstrong. “It has really opened up a lot of doors; there’s a lot of help here.”

For 50 years, the corner of 35th Street and West Wisconsin Avenue sat vacant and littered with garbage. It now hosts a four-story, supportive living facility that is home to veterans, both men and women, from various backgrounds and locales.

“Veterans Manor is the only building of its kind,” said Tonya Jones, the facility’s property manager, who herself is in the Army Reserves.

The facility, which opened on Memorial Day in 2011, cares for both the physical and mental health of the residents, Jones said. It offers residents services such as an on-site counselor, weekly Alcoholics Anonymous meetings and access to the U.S. Department of Veterans Affairs, which provides health care and federal benefits.

“It brings together in a community a set of people with a common set of experiences to live together, and have on-site support right there when they hit various road bumps in life,” said Joseph Thomae, asset manger at Cardinal Capital Management, a company that develops affordable housing.

The building has a huge lobby, a community room, indoor parking, laundry rooms on every floor and many other amenities. Each floor is painted a different color so residents with memory problems have an easier time finding their way around the building.

Living in a community that focuses on their needs and offers services has proven beneficial to those who call Veterans Manor home.

“I like living with other veterans because we have been through the same thing,” Armstrong said. “It gives you a sense of respect and a little closeness.”

His daughter lived with him in his Veterans Manor apartment for a week when she moved from Texas to Milwaukee. He was happy to be able to share his new home.

Veterans Manor came about as a partnership between Cardinal Capital and the Center for Veterans Issues, a nonprofit that works to provide services for those who have been in the armed forces. Erich Schwenker, president of Cardinal Capital, said it was a “tax-credit” project, which means that getting the funds to build was a complex process.

Schwenker said that applying for a tax credit requires six levels of financing, and developers must come up with anywhere from $100,000 to $600,000.

“Lots of people have stepped up to make sure this building works,” Schwenker said.

In return, Veterans Manor is reaching out to the community by building a public eatery, Troop Café, at the back of the building. The food will be prepared in the commercial kitchen in Veterans Manor and the café will be staffed by individuals from the Milwaukee Center for Independence, which helps provide jobs for people with special needs, Jones said.

The partnership between Cardinal Capital and the Center for Veterans Issues does not stop at Veterans Manor, Schwenker said. They plan to collaborate in the near future on a second apartment building for veterans.

“Hopefully, this building takes off the way we want it to and we can go global,” said Jones.

Added Armstrong, “It would be nice if they put up more Veterans Manors in the city of Milwaukee because there are a lot of homeless vets that have nowhere to go.”

About Rebecca Hixson and Dana Christen