“It was a tough neighborhood then,” said Costantini, a local businessman who moved his business to Riverwest in 1986. “There were some gangs in the neighborhood back then. All of our friends thought we were crazy for moving in.”

Thanks to Costantini and local community leaders, the old railway corridor that splits the two neighborhoods has become a catalyst for area revitalization. Joggers, dog walkers and neighbors benefit from the major overhaul that led the project to be recognized as a finalist for the Milwaukee Awards for Neighborhood Development Innovation (MANDI) sponsored by US Bank and LISC Milwaukee.

Although the project was not the winner in its category, “For us being a finalist was a great opportunity to showcase the Beerline Recreational Trail in front of a large audience at a great event,” said Chris Grandt, director of neighborhood development at Riverworks.

Though ground broke on the trail only five years ago, the Beerline Trail story actually begins in 2002, when Costantini said he acquired the land from CMC Railroad for just $1 per foot. 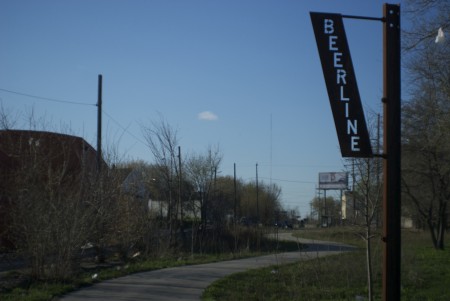 The Beerline Recreation Trail was completed in 2009.

The rehabilitation officially began in 2007, when the city purchased the land and Riverworks Development Corp signed on to coordinate the improvements. Two years and $750,000 later, the trail was completely revamped. Riverworks project leader Chris Grandt said a crew cleaned, removed rail ties and planted nearly 2,000 trees, shrubs and flowers. The crew also installed a multi-use recreational trail and a storm water management system capable of handling up to 3 million gallons per year. Lights were installed to increase safety, Grandt said.

Since the trail was restored, the neighborhoods have seen several indications of economic improvement. New apartments and condos are being built. New businesses have sprouted along the trail. Companies such as Alterra Coffee have opened offices in Riverwest. Grandt said this new influx of jobs comes at a much-needed time for the Harambee neighborhood.

“Looking at census data, joblessness is about 60 percent in Harambee,” he said. “That’s a super high number. Those numbers are high around the city, but much more high here in the Harambee neighborhood than in Riverwest.”

Local residents have begun to notice some improvements in job prospects.

“I can’t speak as to who is getting hired, but I have noticed more job listings and job offerings in the immediate area,” said Randy Johnson, a barber and Riverwest resident.

Johnson also noted the change in the social atmosphere.

“It’s definitely a lot more lively,” he said. “You get a lot of people strolling with their families. It’s motivation to not sit around, really. You see a lot of people out going back and forth, mingling, whereas before it was really just nothing.”

Not every resident is pleased, however. Diane Bandurski, who lives along the trail, lost her parking space to the project. There are also other problems, she said.

“It was my understanding when the project was suggested that the grounds were going to be cleaned up and they were going to be neatly manicured,” Bandurski said. “But so far, it has not come to that.

For Riverworks, the work is not yet finished. According to Grandt, the city is in talks to acquire the land north of the trail for an extension.

About Joe Kvartunas and Alex Rydin