You are here: Home / News / Arts and Recreation / High school poetry slam proves ‘poetry is still there’
Share this... 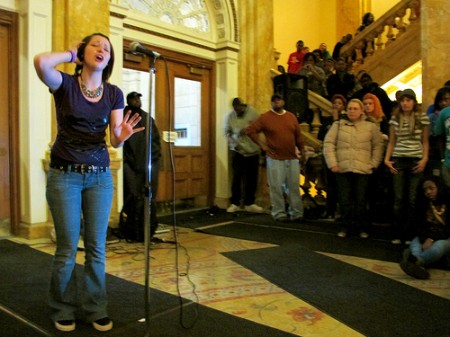 “My name is Shaquille Grandberry and I hail from Arts and the title of this poem is called Glamour Shot,” said the slender boy from behind the microphone. He took a deep breath and began his performance.

Poets like Grandberry from Milwaukee High School of the Arts have spent months competing with students from 16 other Milwaukee Public Schools to make it to the Still Waters Collective High School Slam League finals. Other schools in the championship round included Washington High School, Riverside University High School and Rufus King High School.

After each poem, a panel of five judges scored the performance on a 10-point scale. The only scoring criterion was how much each judge enjoyed the performance. The host of the competition, Dan Vaughn, encouraged the audience to cheer, snap and applaud the poets throughout their performances.

“Judges, don’t let the people sway you,” he said. “People, sway the judges.”

After four rounds of poetry, the individual scores from each school were added together to decide the winner. For the third consecutive year, Grandberry and his classmates from Milwaukee High School of the Arts went home with the trophy.

“It’s so liberating to know that poetry is still there,” Grandberry said. “It’s still the same art form it’s always been.” 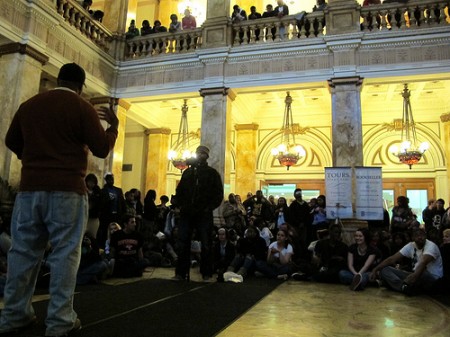 “The biggest thing isn’t the winners or the losers, but how well they communicate the art,” Vaughn said.

Still Waters Collective founder Dasha Kelly said she could not have been happier about the event’s turn-out, despite the dreary weather and a last-minute room change.

“I am probably going to cry myself to sleep with joy tonight,” she said.

Still Waters Collective is an organization that encourages self-expression through creative writing and spoken word poetry. The High School Slam League is one of its community initiatives and programs.