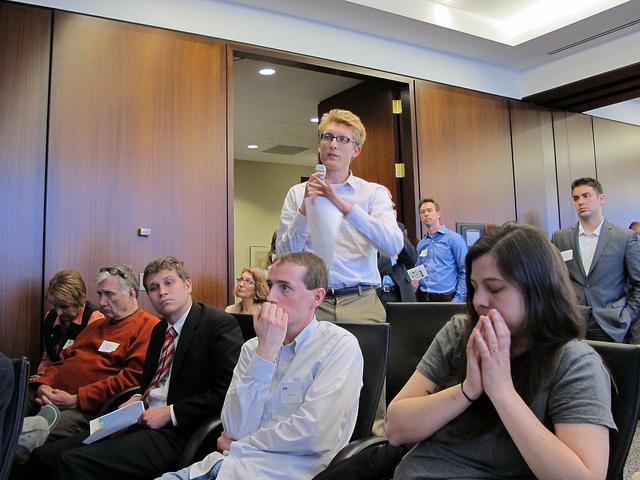 A questioner asks Aldermen Robert Bauman and Nik Kovak how the Milwaukee streetcar project would be funded. (Photo by Sara K. Torres)

Supporters of Milwaukee public transportation recently gathered to promote the plan to build a streetcar that would run from the Intermodal Station to the Lower East Side neighborhood.

The Milwaukee Common Council authorized the project to go to final engineering last year. Once that is finished, the council will determine whether to authorize construction of the 2.1-mile streetcar line, which is expected to cost more than $64 million. Some $54.9 million is expected to come from federal funding, with the balance to be paid for locally. If approved, construction would begin in 2013, with operation set to begin in 2015.

Aldermen Robert Bauman and Nik Kovak both touted the streetcar, saying that it would contribute to economic growth along the proposed route.

“I think it is an economic development tool that is going to increase jobs,” Bauman said.

Critics say that they are concerned about future maintenance and operation costs.  “I have been opposed to the downtown streetcar as its been proposed,” said Alderman Robert Donovan, 8th District.  “I’m concerned about utility and operating costs and how we are going to pay for it.” Asked about the local funds needed to finance the project, Bauman offered no specifics.

The promotional event, hosted by Urban Milwaukee and Newaukee, was geared toward young professionals. About 75 people attended the event, held at the U.S. Bank Center on 777 East Wisconsin Ave.

According to Jeramey Jannene of Urban Milwaukee, the goal of the event was to discuss public transit’s future and to encourage young professionals to get involved in the discussion.

Urban Milwaukee provides information on urban issues and events in Milwaukee.  Newaukee covers opportunities to socialize and engage with the city of Milwaukee. Both target young adults as their audience.

Kerry Thomas, executive director of Transit Now, expressed her excitement about the event. “There’s a ton of energy here about public transportation,” she said. “I think it’s a great opportunity to discuss the future of transit.” 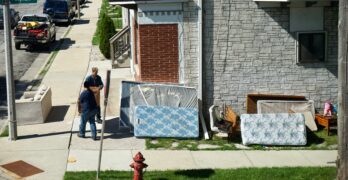 A tenant, a property owner and a staff attorney with the Legal Aid Society of Milwaukee explain the process of evictions.