Christian Ruemmele is not the loudest guy on the construction crew. He’s not yelling from the ladder or entertaining the guys with Hurricane Chris dance moves. There are tattoos on his neck and hands, and dark circles under his eyes, but you don’t notice them. The only thing noticeable about Ruemmele is the sincerity in his eyes, the honesty in his voice and the gray YouthBuild t-shirt he wears on site.

Ruemmele is one of eight 18- to 22-year-olds participating in the AmeriCorps YouthBuild program at the Neighborhood Improvement Project (NIP). The crew works every afternoon at 23rd Street and Mitchell Street to build a house from the foundation up. The finished project will provide an affordable home for a low-income family.

Ruemmele, originally from Caguas, Puerto Rico, symbolically puts his mark on every house he builds through hard work and leadership on site. One day, he hopes to carry his two kids, Christian Jr., 3, and Xarely, 4, through the neighborhoods where he has worked. “You see that?” he’ll say. “Daddy built that house.”

For Ruemmele, 22, YouthBuild is not just a job. It’s an opportunity to turn his life around. He applied for the job after serving four months in prison for heroin possession and distribution. His short sentence was divine intervention, he said. “I think God was there. He gave me another chance.” 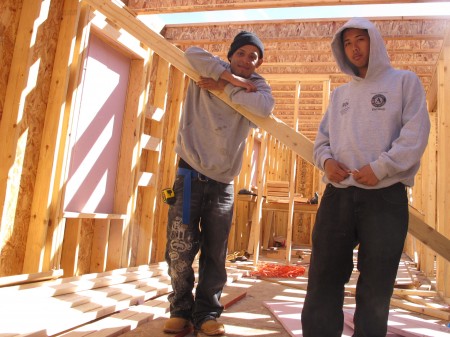 Ruemmele joined a gang his freshman year at South Division High School, 1515 W. Lapham Blvd.  He was attracted to the loyalty and brotherhood. He said making money was the gang’s priority, which is why he sold drugs senior year.

“When we bring people into the program, we’re looking for guys that actually mean that when they say they want to change, said Mike Kirchner, education and career coordinator at NIP. They have a vision; they have a reason for it. Christian’s followed through with that.”

Kirchner and Bernadette Arellano, program coordinator of NIP, interviewed Ruemmele last October. Ruemmele said he came into the interview wearing a do-rag, hat and saggy jeans, similar to how he dresses today. The two did not remember Ruemmele for his appearance, but rather, his honesty.

“He was willing to open up. He’s very open about things. Even in the interview he started teaching me and Mike about things that he’s gone through. We can learn a lot from these guys if we pause enough to listen,” Arellano said.

Ruemmele was hired. “For the first time I was doing something good,” he said. His life plan now consisted of earning his GED through YouthBuild, graduating from the University of Wisconsin-Milwaukee with a business major, and someday owning his own construction company.

Ruemmele said he’d like to hire unemployed family members, such as his uncle, who is currently in jail. “That’s what we’re about. Making the community stronger,” he said.

Other YouthBuild members have pegged Ruemmele as a group leader —someone who is always willing to help.

“When we’re out there on the site, I tell the guys we need to bond with each other. ‘It’s got to work out like a relationship,’ I say. That’s the way I tell them. I like keeping my crew motivated,” Ruemmele said with a smile.

“I’m a guy that likes helping a lot. Kevin—he’s a guy that’s usually late—and Ms. B (Arellano) told me he wasn’t getting his hours so now I pick him up every morning to make sure he’s early every day.”

Ruemmele is the first YouthBuild member to show up for work, at 6:50 a.m. Arellano arrives minutes before him. “I ain’t never woke up so happy for a job. I used to be lazy, but now I wake up excited to go to work,” he said.

“Christian is very self-sufficient. He’s not waiting for people and things to come to him and happen for him,” Arellano said, “He’s pushing to make them happen, and that’s where huge success happens.”