You are here: Home / Home / Carousel / Hundreds rally and speak out against sexual assault
Share this... 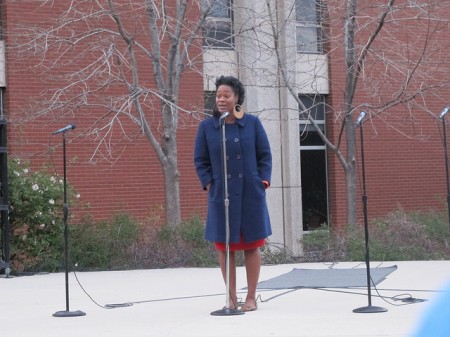 For some survivors, sharing the story of being sexually assaulted can be as victimizing as the crime. Many remain silent for fear of being blamed for what happened to them. A recent event that combined a “speak out” with the international “Take Back the Night” initiative gave a voice to the voiceless through an open-mic and candlelight vigil.

“When a survivor shares their story, they are reliving that,” said Annika Leonard, advocate and ally for sexual assault survivors. “They are healing, but they are reliving it.” Leonard introduced the survivors at the event and told attendees that it is a gift when survivors tell their story. Leonard said she had been assaulted multiple times and has made it her life’s work to help other survivors.

“The world will tell the survivor that it was his or her fault,” she said. “It’s about counteracting the media message.” The Boys & Girls Clubs of Greater Milwaukee (BGC) partnered with University of Wisconsin-Milwaukee to host the event at UWM. In addition to the “Speak Out” the night also included performances by a cultural dance group, Still Waters Collective youth poets and Audacious a cappella singing group.

The BGC youth program has been preparing for “Speak Out” since last August and helped organize the event’s resource fair and mile-long march. More than 500 people participated in the march.

About 30 candles were lit in honor of survivors who spoke out on Friday. La’Keeta Caldwell, high school services program manager at BGC, said BGC youth could not stay for the Speak Out because they had to be back before BGC closed. If they had been allowed to stay and share their stories, many more candles would have been lit.

“For me that’s really sad,” Caldwell said, “Every time I hear a story I know there is more work that needs to be done. At the same time it makes me happy because I know they’re in a place of healing.” 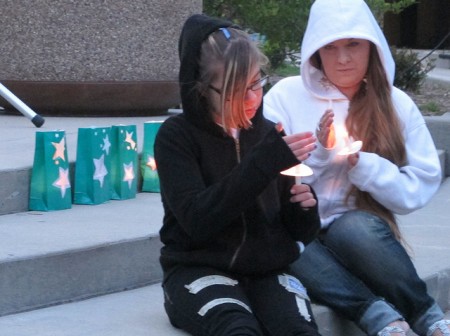 According to Caldwell, it was important for BGC to educate participants on the truths of sexual assault because many are survivors themselves. She added that survivors need to know that they are not alone and that national resources exist—especially for students who are going to college in the fall.

“It’s never the victim’s fault, even if she was sexually promiscuous. No means no. Those are the myths that I really want the community to think about and focus on,” Caldwell said. Leonard added that many supporters of survivors inadvertently blame victims when they ask where they were, or what they were wearing at the time of the incident.

Leonard advised the audience to listen to survivors when they speak. “Encourage them to get help and don’t assume you know what it’s like to be a survivor of sexual assault. You don’t know what you would do. And being sexually assaulted doesn’t always mean it’s a stranger in a mask in a bedroom,” Leonard said.

In fact, 52 percent of sexual assaults reported in 2010 were committed by someone known to the victim, but outside the victim’s family. An additional 37 percent of offenders were family or household members or a dating partner, according to a report by the Wisconsin Office of Justice Assistance. The report also noted that victims under the age of 21 represented more than 75 percent of sexual assault victims in 2010.

Caldwell said statistics show that sexual violence is a cycle and generational. “It’s an issue that no one wants to talk about in the families,” she added.

“I have the utmost respect for men who speak out,” Leonard said. She explained some men struggle to voice their opinions against patriarchy and oppression for fear of being vulnerable and compared to women. She added that there are myths that men can’t be assaulted because they are strong.

One male survivor who spoke out, and had shared his story in the past, said: “I love moments like these because I heal. All they took was my body. To everybody else who has been sexually assaulted: this is family. Share. Own it. Survive.”