More than two months after Florida teenager Trayvon Martin was killed, the case continues to be the most-followed news story in the country, trailed closely by the presidential election and the economy, according to the most recent News Interest Index from the Pew Research Center.

Asked what story they were most interested in, 22 percent of 1,000 adults surveyed between April 26-29 said the Martin case, 18 percent said election news and 17 percent said the economy.

The second-degree murder case, in which neighborhood watch volunteer George Zimmerman allegedly shot the black 17-year-old, has been the subject of public scrutiny and outrage since it occurred on Feb. 26.

Martin was wearing a hoodie and carried a bag of Skittles and an iced tea as he walked to his father’s girlfriend’s house in Sanford, Fla. Zimmerman, who was charged and is now free on bail, has said he thought Martin was armed and apologized in open court to Martin’s family.

Accusations of racial profiling and racism have played a prominent role in the public conversation.

Chicago, New York City and Los Angeles were among the cities that had large “Million Hoodie” marches supporting Martin’s family and calling for Zimmerman’s arrest.

In Milwaukee, the response was low-key. Gabrielle Gray, a senior at Marquette University, helped the Mu Beta chapter of sorority Alpha Kappa Alpha organize a campus discussion on hate crimes attended by about 20 people. Gray said the conversation was needed because of the Martin case, the controversy over the shooting of Bo Morrison in West Bend and the killing of Shaima Alawadi, a Muslim woman in California. 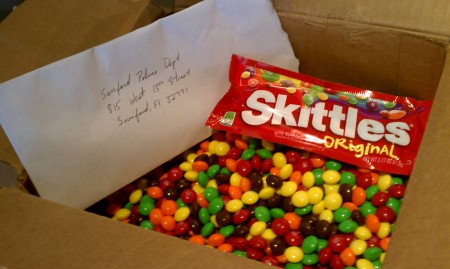 “There have also been a lot of hate crimes in the U.S but a lot of people don’t know about them,” Gray said. “We wanted people to see how it’s not a black or white issue but more of a hate issue (in general) around race, religion and culture.”

The group also collected and sent the empty bags from 16 pounds of Skittles as well as Bible verses to State’s Attorney Angela Corey and the Sanford Police Department, Gray said.

“I hope that America wakes up and reevaluates who we really are as a nation,” she added.
At University of Wisconsin-Milwaukee, freshman Jameela Al-Asmar and fellow members of Students for Justice in Palestine, participated in a campus protest of the Martin killing organized by Students for a Democratic Society. Nearly 75 people participated in the vigil and protest and almost 200 gathered at a rally in the campus union.

“We can’t change the fact Trayvon is dead but it’s incidents like these that show there are people that care,” Al-Asmar said. “We can definitely open up people’s eyes that when things like this happen it does matter and that there are people (who are) going to be fighting for justice.”
Despite the relatively low level of engagement around the case, Milwaukeeans have shown support for Martin in their own way, according to Vincent Lyles, president and CEO of the Boys and Girls Clubs of Greater Milwaukee.

He said he hopes that young black people are not only paying attention to the Trayvon Martin case, but also being mindful of their own presence in society.

Boys and Girls Clubs of Greater Milwaukee runs several programs to help achieve that goal. The Men in Action program focuses on issues of respect, etiquette, positive communication and community service, and provides adult mentors. Passport to Manhood gives young leaders in middle school and up a forum to talk about issues of the day. A similar program for girls called Sister Pride combines educational field trips, tutoring and preparation for the ACT college entrance exam.

Lyles advises young people to be conscious of their surroundings. “You live in a society where in some respects you’re targeted for nothing else than what you’re wearing or what you look like,” Lyles tells them. “The challenge is how do you rise above that and educate … your brothers and sisters in the neighborhood we live in.”