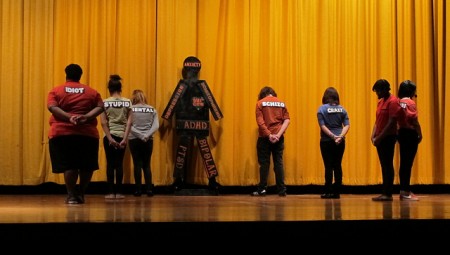 Students from Milwaukee High School of the Arts perform “Pieces: In My Own Voice,” a play about mental illness. (Photo by Sara K. Torres)

“Where did this start? Did it start with a death in my family? Was it a break-up? Or did I just wake up one morning and depression was there, standing over me?” asks Anna Leah Lovlace, a ninth grader at Milwaukee High School of the Arts during a performance of “Pieces: In My Own Voice.”

The young actors explained that approximately 20 percent of adolescents have a diagnosable mental health disorder, and that suicide is the third leading case of death in adolescents and young adults.

Asked what they hope the play will accomplish, the student performers said they want to end joking about mental disorders and reassure those who have a mental illness that they are not alone.

William Esty, a ninth grader at Milwaukee High School of the Arts and actor in the play, said he hopes people who do not have a mental illness learn that “this is something they shouldn’t make fun of.” He added, “They should be able to accept and help.

“For people who have a mental illnesses I hope that they realize there are people out there that can help them and people that will listen to them and make sure they feel a lot better about themselves,” Esty continued.

Brenda Wesley, director of education and outreach for NAMI (National Alliance on Mental Illness) Greater Milwaukee, said she was inspired to write the play because she had two family members diagnosed with a mental health disorder.

“We want to hide it and we put it in a closet and we need to start talking about it so we can heal,” Wesley said.

“Pieces: In My Own Voice” was originally performed by adults, but this spring student actors began performing it at high schools around Milwaukee.

The performance at South Division High was the first of 10. For more information visit their website.