When Paola Felix-Encarnacion graduated from South Division High School on Milwaukee’s south side in 2007, she knew she wanted to return.

She tried setting up a Latina mentoring group at South Division while she was a student at University of Wisconsin–Milwaukee, but it did not take off.

Now, as a City Year AmeriCorps member, she is finally able to help out her high school alma mater as a tutor, mentor and role model.

City Year is an education-focused, nonprofit organization that partners with public schools to help keep students in school and on track to graduate. City Year AmeriCorps members commit to a full year of service in the schools.

“I saw that one of the schools they had was (South Division High School) and that really called to me,” Felix-Encarnacion said.

Felix-Encarnacion did not hear of City Year until she attended a job fair at University of Wisconsin- Milwaukee during her final semester. At the time, she was waiting for a placement in the Peace Corps.

“It was a done deal – Peace Corps after graduating from college,” Felix-Encarnacion said. She graduated with a degree in community education.

“I saw all these people with their red jackets and I was like, ‘What are they doing?’” Felix-Encarnacion said. After talking with the recruitment director at City Year Milwaukee she decided to apply for the program. 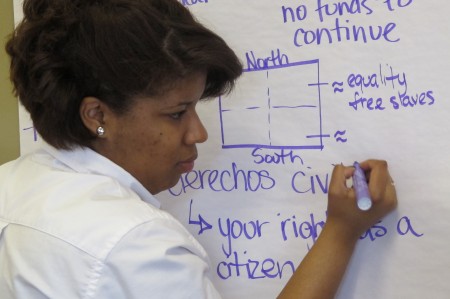 “I really didn’t think that I would be placed at South Division because it is my alma mater,” Felix-Encarnacion said, but she was and could not be happier.

“(South Division) has its challenges but I love it,” Felix-Encarnacion said. “I love the fact that I am here and can see my old teachers.”

At South Division, Felix-Encarnacion tutors students in English and math with eight other AmeriCorps volunteers.

“I know I am making a difference,” Felix-Encarnacion said.

Felix-Encarnacion takes pride in the progress of her students.

“One ninth-grader didn’t know how to multiply,” Felix-Encarnacion said. The two have slowly gone through the multiplication tables and are now working on fives, sixes and sevens.

“I remember the day that she finally learned the table five. For her to be able to go five, 10, 15 and get it, that was the happiest moment,” Felix-Encarnacion said.

She said the student is now more confident in her academics.

“She will scream her answers and always wants to perform problems on the board. She now has an A in her math foundations class and a C in Algebra, while before she was flunking both classes,” Felix-Encarnacion said.

“She’s really good at talking to (the students) on their level in a way that is effective,” she said.

Jason Holton, executive director of City Year Milwaukee, said he has noticed Felix-Encarnacion’s connection with the students while observing her tutoring groups.

“She was effectively using the tutoring model,” Holton said.

Holton said the students tutored through City Year are struggling but just need a little extra help. “We can be most effective with (C or D students),” he added.

City Year has been working at South Division High School for two years.

“We have been thrilled with the results we’ve seen,” Holton said. There have been increases in attendance, standardized test scores and fewer behavior problems.

Holton said City Year members are sometimes the only consistent adult presence through the course of a student’s day.

“(AmeriCorps) is part of the solution to the nation’s most pressing problems,” Holton said. “We’re building leaders for life.”

Felix-Encarnacion plans to spend a second year at South Division High School with City Year Milwaukee. She would like to return there as a teacher one day. She said she has a passion for working with Latina students and an advantage because she is Latina and was born in Puerto Rico.

“(Latinas) have a difference in seeing things that sometimes people really don’t understand,” she said.