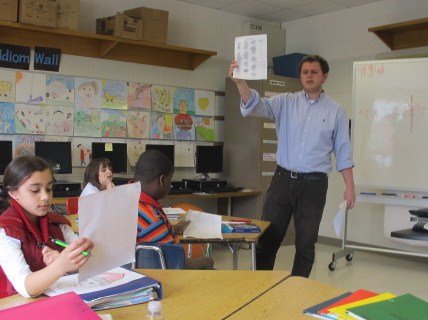 Ryan Michaels has found his calling teaching in a Milwaukee elementary school. (Photo by Ben Sheehan)

Ryan Michaels planned on going to law school. A political science and history major at Marquette University, he had never thought of teaching. Now, approaching the end of his second year with Teach For America Milwaukee, he can’t imagine doing anything else.

Michaels was working at Marquette’s Office of Public Affairs and co-chairing the Les Aspin Center Alumni Council when he got an email from a Teach For America recruiter.

“It opened my eyes to the education inequity in the United States,” Michaels said about his meeting with the recruiter.

Like many Teach For America recruits, Michaels had never taken an education class. Two months of training later, in September 2010, he began teaching at Clement Avenue Elementary School in Milwaukee. 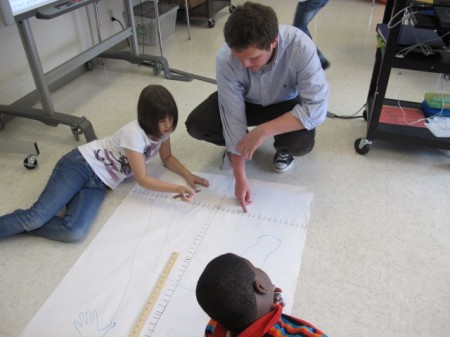 Ryan Michaels gets down to the students’ level in his classroom at Clement Avenue School. (Photo by Ben Sheehan)

Michaels teaches fifth grade math to students with emotional and behavioral disabilities. On a recent class day, Michaels was working on x-y coordinate grids with six students. He asked them to trace outlines of each other on large sheets of paper and identify parts of the body using the coordinates.

Michael said he thinks some teachers tend to ask less of their special education students. He believes that Teach For America teachers constantly push their students to achieve significant academic gains. Last year, his students averaged about a year’s growth in reading, math and writing—well above the district average of seven-tenths of a year, according to Michaels.

“We really don’t accept the status quo that our students have to achieve less than regular education students,” he said.

Michaels could not be happier about being placed in special education. “I think part of the reason you do Teach For America is you want to help the kids that need it the most. I would argue that special education is the area that students really need help the most.”

Michaels pointed out that students from low-income communities are much less likely to succeed than those from affluent communities. He said the mission of Teach For America is to end this achievement gap and ensure a great education for all students.

“Teach For America does an excellent job of advocating for the fact that every student deserves the chance to attain an excellent education, no matter what zip code or area code they are from,” Michaels said. Said Thomas, of Teach For America Milwaukee, “One way is to ensure every teacher is a quality teacher.”

Michaels said he believes Clement Avenue is one of the best public schools around.

“I’m proud of the work we’ve done here,” Michaels said. “I’m proud of my work the last two years, and most importantly, I’m proud of my students and my school for really caring about every single thing that we do for our kids and just making sure that every day we come in they are going to get the best education they can.”

Michaels has decided to forgo those law school plans and remain a teacher at Clement Avenue.