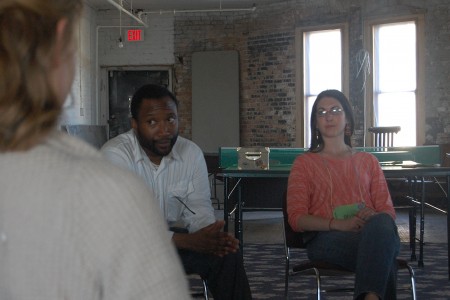 Isaiah Rembert and Lauren Thrift discuss Circles of Accountability with a visitor, prior to a gathering of teenage burglars with community representatives. (Photo by Alec Brooks)

Ever since she was growing up in the South, Lauren Thrift knew she wanted to do something to address the societal problems she saw around her.

“I saw the same thing everywhere. I saw poverty. I saw suffering,” Thrift said. “It was this internal struggle. I’m seeing these problems in the community, and I don’t know how to address them.”

That struggle eventually brought her to her position at Safe and Sound in Milwaukee, a city a thousand miles away from where she grew up. Her work now revolves around restorative justice — the idea that the judicial system should focus on rehabilitation instead of only punishment.

Her interest in social justice was the reason she chose to attend graduate school at SIT Graduate Institute in Brattleboro, Vt. Thrift credits the school with teaching her how to address the problems she observed.

“I already had these ideas,” she said. “It was SIT that opened the door and gave the theoretical background.”

She found Safe and Sound while looking for AmeriCorps programs to get the necessary field experience for her master’s degree and practice restorative justice.

Her ultimate goal is to combine her background in social justice with music — another interest — to teach the skills she learned in graduate school.

“I don’t think anyone should have to go pay all that money to learn all these basic things,” Thrift said. “We should be learning about conflict resolution in kindergarten.”

Since coming to Safe and Sound, she’s helped get a program for first-time burglars off the ground. Called Circles of Accountability, the program works to reduce repeat crimes by bringing the youth offenders to meet their victims and giving both sides a chance to share how they’ve been affected.

“Circles of Accountability helps them realize it’s not just about the stuff,” Thrift said. “It’s about a lot more than the stuff … We hear over and over from these people who have been burglarized (that) they feel violated.”

The offenders also hear from members of the community, including some participants in Safe and Sound’s youth drop-in centers. 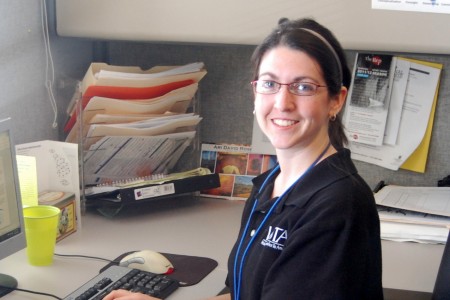 Lauren Thrift, AmeriCorps member, at her desk at Safe and Sound where she leads a restorative justice program. (Photo by Alec Brooks)

“That way (the offenders) start to learn how their actions have impacted not only themselves, but the whole community,” said Isaiah Rembert, manager of youth programs.

After the Circle, Thrift and Rembert meet with the offenders again to see if the experience has taught them how crimes like theirs hurt the people around them.

Both Thrift and Rembert said they’ve seen improvement in those who’ve gone through the program.

“We have no interest in doing programming that is not going to make a real impact,” he said.