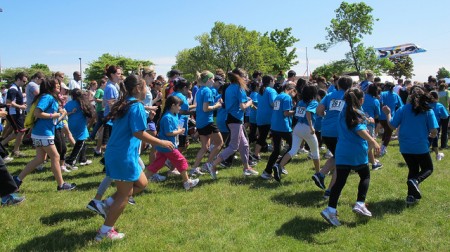 Runners take off as they begin the 5K mile for Laura’s Smile Mile walk/run near the lakefront at Veterans Park. (Photo by Kenya C. Evans)

On a bright sunny weekend day 147 girls from the Girls on the Run program gathered to participate in an annual 5K walk/run at Veterans Park. It was the highest turnout yet for Girls on the Run.

“The most we’ve ever had in the past is 67, so to coordinate 147 girls, plus every girl has a running buddy, is overwhelming, but it’s fantastic,” said Zarine Anklesaria, Girls on the Run Milwaukee council director.

Girls on the Run is an international program for pre-teen girls that addresses their physical, emotional, mental and social development. The program has been in Milwaukee since 2008, but three sites in Lindsay Heights (Northside YMCA, Gwen T. Jackson Elementary School and Milwaukee College Preparatory School – Lloyd Street Campus) joined this year.

“I like that we get to exercise, eat fruit and be healthy,” said Sarah Robinson, 9, who participated in Girls on the Run at Milwaukee College Prep-Lloyd Street Campus. She finished the run in 35 minutes with her running buddy, Fatuma Emmad, Alice’s Garden’s urban farm manager.

This year, the girls ran in Laura’s Smile Mile. The event was named after Laura David who was diagnosed with ovarian cancer at 23, and lost her life to the disease seven years later in 2011. Family and friends started the walk/run in 2006 for Laura who they said had an “unforgettable smile” to create awareness about ovarian cancer.

There are 12 Girls on the Run sites in greater Milwaukee, including Milwaukee’s north and south sides, Belgium, Menomonee Falls, Cudahy and Oak Creek.

“It was awesome,” said Leyshalys Padro, 12, who participates in Girls on the Run at La Causa Elementary School. “It was kind of hard. I had to push myself to keep going.” Her mother, Leiliana Lacen, said she was proud of her daughter. “It’s an amazing opportunity to see my daughter run and do something good,” Lacen added. 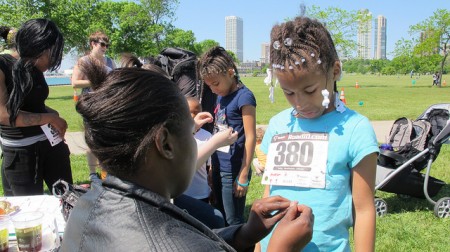 Girls on the Run participants get their numbers pinned as they prepare for the run. (Photo by Kenya C. Evans)

Feedback on the program has been positive overall, according to Nancy Spransy, Girls on the Run site coordinator. Many teachers who volunteer with the program say it’s the highlight of their week, “which means a lot when you’re working with kids all day,” she added.

The program teaches the girls team building, self-knowledge and how to relate to the world at large, according to Anklesaria. It helps the girls to focus on themselves, learn how to attain a positive body image, and take leadership roles in their families and communities at an early age, she added.

As the girls learned to speak up for themselves, they began to challenge authority, according to Angelique Robinson, site coordinator of the community learning center (CLC) programs at Gwen T. Jackson and Girls on the Run coach. “Some of the teachers were saying they are a little more bossy, so we still have a few kinks to work out and create that balance,” she said.

“It’s OK to be angry or upset, but own it and voice it so we can move on. Now instead of them having a temper tantrum, they have action plans; they practice deep breathing or sing a happy song in their head,” Robinson added.

Girls on the Run is funded nationally by sponsors including New Balance, Secret deodorant, Horizon Fitness and Goody Products. But the cost per girl is $150, so the program is always looking for additional financial support and community partnerships, according to Anklesaria.

Although the run brings the program to an end for the school year, the coaches at Northside YMCA and Gwen T. Jackson sites said they will continue to work with the girls throughout the summer, and are preparing for the fall program.

“I really love working with the girls, and they are sad the program is coming to an end,” said Tyanna McLaurin, healthy neighborhood community coordinator at Walnut Way and coach at Northside YMCA site. “It just goes to show that girls really need their own space where love is flowing in abundance.”