You are here: Home / News / Arts and Recreation / Westside Academy students rally and remember
Share this... 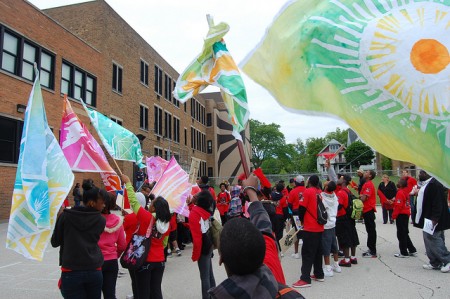 Students line up with flags and signs outside Westside Academy II. (Photo by Alec Brooks)

Every year, Nicole Janzen of Westside Academy II sets time aside for her three English classes to write poems and go on a peace walk. But when a recent graduate of the school was shot and killed, Janzen and other community members decided they needed to organize something bigger as a response.

About 60 students from Janzen’s classes recently joined artists from Express Yourself Milwaukee and other community organizations for a peace rally and dedication of a remembrance garden at 33rd Street and Lisbon Avenue.

Roderrick Capehart, 17, graduated from Westside Academy two years ago and was shot and killed in January. A bench was dedicated to him and another victim of gun violence, Devon Maurice Goldsmith, brother of a Westside student.

The group marched from the school to Peace Park on 31st Street and Lisbon Avenue, where there was a short ceremony. From there they went to Our Next Generation on 34th Street and Lisbon, where volunteers served the students lunch. Finally, they traveled to the site of the newly built remembrance garden for the dedication. 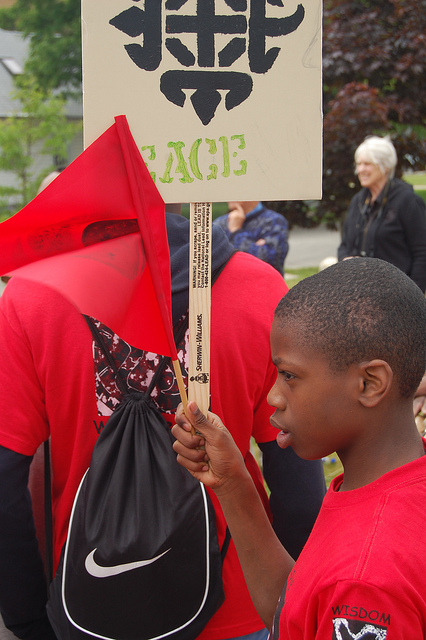 A young boy marches for peace. (Photo by Alec Brooks)

Also speaking at the event was Teju Ologboni, a civil rights activist who told the students that their youth gives them the opportunity to change the world. In addition to speeches, Adekola Adedapo, a local jazz musician, performed several songs. Jared Fields, a candidate for the 18th Assembly District, shared how his family was affected by gun violence and urged the audience to “stand together.”

“The march that you did today is just the beginning of action that says ‘we don’t have to stand for gun violence,’” he said. “We’re in this together.”

“I think this is an absolutely wonderful thing,” she said. “Kids need to grow up with the idea of peace in their neighborhood.”

Volunteer RoSean Gray said that he thought the rally and dedication succeeded in raising awareness and helping students cope with violence they had experienced.