You are here: Home / Home / Carousel / Academic Olympics inspires students to excel in math
Share this... 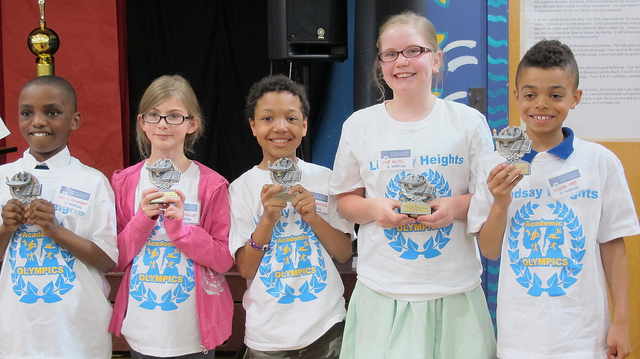 Heads down and pencils writing away, third- and fourth-grade students from a half dozen schools sat five to a table as they solved math problems for the second annual Lindsay Heights Academic Olympics competition. Organizers of the event hope the competition, held at Milwaukee College Preparatory–Lloyd Campus, will motivate more students to enjoy math.

Area children are often afraid of math, according to Mario Hall, Walnut Way community engagement specialist. “We are working to change that, and get them to like math,” he said. 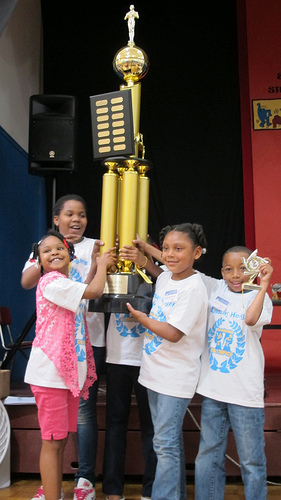 Both Hall and LaRhonda Bearden-Steward, program site director for the Wisconsin Initiative for Neighborhoods and Schools that Work for Children (WINS), said students who participated last year were excited and eager to enter this year’s competition. WINS coordinated the event along with a planning committee that included members of the Lindsay Heights Children’s Success Coalition, an alliance of school principals in the neighborhood.

This year third- and fourth-grade students competed in four areas: computation, geometry and measurement, numeration and number concepts, and problem solving. Last year only third-grade students participated. According to Hall, fifth grade will be added next year.

Data are not available to demonstrate whether the competition has improved math achievement in the schools that participated.

However, “We’re starting to see it,” Bearden-Steward said. The schools have more students wanting to participate than there are adult volunteers to tutor them, she added. The committee will work on strategies to address the imbalance for next year.

“(Students) were very motivated to do well because we could only select a few from each class,” said Carmen Jackson, a math teacher at YMCA Young Leaders Academy.

The competition has four rounds, one for each area. Students are given math problems to complete and are judged individually for three rounds. In the fourth round they compete as a team of five.

“The way we currently have it set up, it’s not designed to be interactive, so going into next year, we’re thinking about changing that,” said Bearden-Steward.

Awards are given to first, second and third-place winners for each round and grade level. In addition, awards for each grade level go to the school that did the best overall in team and individual competition. Milwaukee College Prep took the trophy home the second year in a row for third grade, and Hopkins-Lloyd Community School won the fourth-grade trophy.

The number of students participating increased from 25 to 47 and parents attending doubled from 25 to 50, according to Bearden-Steward.

The Academic Olympics launched the mathematics competition last year. The competition is based on the Milwaukee Public Schools’ standardized tests. Third-grade students have performed poorly on the tests.

“Our students, as a whole, may have not done so well in the area of math, and so we want to create some excitement around mathematics,” said Hall. “We’d love to move to another academic area eventually.”

“Math, science and technology is where it’s at, in terms of jobs of the future,” City Council President Willie Hines told the audience. “So it’s amazing that you’re embracing math.”

Four out of the five schools that participated last year returned to the competition, and two new schools outside the Lindsay Heights neighborhood participated: HOPE Christian School-Prima and St. Marcus Lutheran.

Hall was pleased the two schools chose to participate. “That was our hope, that we could get schools out of the Lindsay Heights area to come (to) Lindsay Heights for an event,” he said.

“It was exciting, but I felt kind of nervous,” said Alyna Williams, a 9-year-old third grader from YMCA Young Leaders Academy. A first-time participant, she won two awards.

Organizers plan to grow the competition to include third through eighth grade, and add other academic subjects, according to Bearden-Steward. By that time they hope to offer savings bonds to winners, she added.