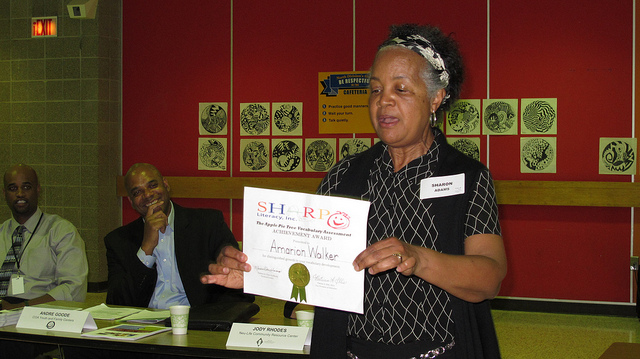 Sharon Adams, director of programs at Walnut Way, displays an academic achievement certificate given to her by a neighborhood child. (Photo by Kenya C. Evans)

More than 70 community members recently gathered at North Division High School for an update on education, parent outreach, programming and jobs for youth in the Lindsay Heights neighborhood.

The topic was chosen by attendees at the last meeting in November, who were asked to vote on which of the eight issues addressed in the neighborhood’s Quality of Life Plan mattered most to them. Youth and Families and Academic Achievement were tied for the most votes.

The semi-annual meetings, sponsored by the Lindsay Heights Neighborhood Initiative, report on progress toward the goals set forth in the plan developed by community members.

“We want to create an environment in Lindsay Heights where it’s cool to be smart,” said LaRhonda Bearden-Steward, one of the panelists and program site director for the Wisconsin Initiative for Neighborhoods and Schools that Work for Children (WINS). Bearden-Steward asked parents to require their children to read and work on math over the summer.

Panelists shared some of their successes and recent projects, such as the opportunity Running Rebels had to participate in Harley-Davidson’s “Build” project.

Peeples said the teens rebuilt an old Harley-Davidson motorcycle that was displayed at the Iron Horse Hotel in Milwaukee. It won first place in the categories “Best in Show” and “Fastest Bike” and was later auctioned off, according to Peeples. “The program is 100 days, and one of its objectives is to help build communities,” he said.

Rhodes described Neu-Life’s unorthodox method of outreach for the community center. “Once a month, we go out into the community with teens to look for kids who are hanging out in the neighborhood and tell them about our programs.” This word-of-mouth method has proven to be effective, Rhodes said.

In response to an audience member’s question about how parents are being engaged, Goode said that COA does personal home visits. “We go out to meet the parents to teach them how to work better with their children and meet their needs,” he added.

Other concerns included North Division’s negative image and what can be done to improve it. Eddie, who coordinates MPS recreation programs at the high school, denied that people are scared away. “People aren’t afraid to come to North. It’s not just a school, it’s an institution. It’s a campus that brings people of all backgrounds together,” he said.

After the panel discussion community members broke into eight smaller groups called “table talks.” Each group discussed one strategy in the Quality of Life Plan. Walnut Way staff members documented the discussions so that they will be able to address the issues and plan future programs.

Attendees also received booklets containing information about 29 youth and family organizations, handouts about the last meeting and other information.

The next Lindsay Heights “Report to Community” is scheduled for Nov. 19.