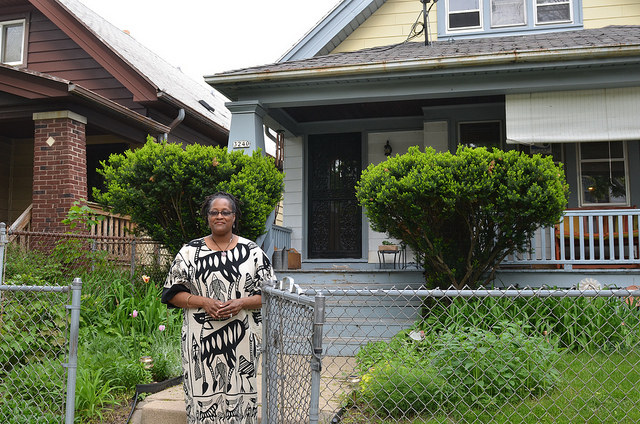 Block captain Denise Wooten and her husband inherited the house at 3240 N. 14th St. from his mother in 2007. (Photo by Sue Vliet)

Sometime in early 2010, Borchert Field homeowner Denise Wooten reached her limit. Listening to a presenter at a block club meeting citing a string of statistics on crime, unemployment and school dropouts, Wooten finally put her hands over her ears.

“I had heard enough of that. It was overwhelming. Instead of coming to tell us how to get out of this or encouraging us, it was always bad news,” Wooten said.

She took a stand against naysayers and encouraged the group to focus on positive action. The members started telling people not to come to meetings “unless they had something to help us build with” and someone added “because 14th Street cares.” The block club on 14th Street between Ring and Burleigh streets quickly adopted the name, “14th Street C.A.R.E.S” and Wooten crafted “cares” into an acronym for Community Advocating for Residential Empowerment and Stability.

The new name fit, reflecting the group’s growing energy and capturing the feeling members hoped to project. “It really touched people. They were happy that we had an identity — one that they embraced,” Wooten said.

The Borchert Field neighborhood was named for the ballpark built in 1888 between West Chambers and Burleigh, and North 7th and 8th streets. Originally called Athletic Field and renamed in memory of Otto Borchert in 1927, the one-block park hosted Milwaukee major and minor league baseball until 1952. Borchert owned the minor league American Association Milwaukee Brewers. After the new Milwaukee County Stadium opened in 1953, the city bought and demolished Borchert Field. The land served as a playground for 10 years until Interstate 43 was constructed on top of it.

In the late ‘50s and early ‘60s, the north side neighborhood consisted of well-maintained, mostly owner-occupied homes with neat lawns. Former block captain and current resident Charles Robinson remembers Borchert Field as “a really nice, clean, quiet neighborhood.” Robinson, who now lives in his grandparents’ former home at 3225 N. 14th St., lived a few streets east with his mother and stepfather in the ‘60s and attended Rufus King High School. He recalls his grandparents’ block at that time as a safe haven.

“It was just a wonderful block. And I was very proud of my grandparents who started the block club [in 1964],” Robinson said. The club’s sole function was to collect $20 from each homeowner to pay for snow removal in the alleys behind the houses. That’s what they needed at the time – the city only cleared the streets.

According to Auriea Mosley, who also attended King High School in the ‘60s, “You knew everybody. Everybody was like family.” Mosley moved away in 1967, but came back to the neighborhood in the mid-1980s.

Changes came to Borchert Field during Robinson’s and Mosley’s high school years. Practices such as redlining and blockbusting played on the racial fears of some whites, while also discriminating against blacks seeking mortgages. The population of central city neighborhoods rapidly changed from mostly white to mostly black. In addition, the building of Interstate 43 displaced many people and disrupted established neighborhoods.

“My junior and senior year it was like we had a perfect [racial] mix. We had what they call diversity,” Robinson said. “King was tops in everything, in the city and the state and we were getting recognition from Washington D.C.” But in spring 1966, at the end of his senior year, there was an exodus of white faculty to the suburbs. Robinson recalls feeling abandoned, especially when white teachers and coaches bid farewell to the school by performing “Bye-Bye Blackbird.”

Though its racial makeup had changed, Borchert Field remained stable and middle class into the 1980s. Many residents worked in the 30th Street Industrial Corridor, finding a demand for skilled labor in factories. Men earned salaries that allowed them to support families and own homes.

Former block captain Mary Gofoe, who lives at 3140 N. 14th St., moved there in the mid-‘80s and found a block that included a lot of school-age children and homeowners looking out for one another.

Economic forces were shifting, however, and Borchert Field began to feel their impact. A.O. Smith/Tower Automotive, American Motors, International Harvester, Esser Paint and the other factories in the corridor exported jobs and began closing down in the late ‘80s. Rising unemployment led to increased crime and a decline in the condition of houses across Milwaukee’s central city neighborhoods. A transient population moved in as many homeowners moved out. “And the trust factor was not there anymore,” Mosley said. Nor were the jobs.

The ‘90s ushered in a dark period in Borchert Field. Drive-by shootings became a problem, said Robinson who had moved to his grandparents’ house in 1979. He recalled five murders on the block in about three years. “I started going to all of the funerals because I didn’t want to become anesthetized at so many black young people getting killed.”

Unwilling to stand idly by while neighborhood youth were being killed, Robinson, a block captain for 14 years, stood up to the criminals. Anytime he heard gunshots or saw something suspicious he called the police.

“The kids would intimidate me all the time. They walked past and did like this with their finger — trigger finger [forming a hand into the shape of a pistol] — trying to threaten me because they figured I was the block club snitch.” One night in 1999, on their way to the YMCA, Robinson and his sons were targeted. “They were shooting at us. I don’t think they wanted to kill us, probably just to frighten us.” He moved out of the neighborhood and the block club went dormant.

The neighborhood continued to slide. High unemployment ate away at property maintenance and home ownership declined. By the time Robinson moved back to help his aging grandmother in 2005, people didn’t even talk to each other any more, he said. With several neighbors, Robinson restarted the block club “because we wanted people to come out of their doors and talk to each other.”

This time the block club served a different function. Like Robinson, others who joined remembered when the neighborhood was well kept and neighbors knew and cared for each other. “We wanted to get that back,” said Gofoe. Empowered by a successful effort to get the city to clear shrubbery and improve the safety of her sons’ bus stop, she stepped up as block captain.

The revived block club started to meet at Metropolitan Baptist Church, 1345 W. Burleigh St. It organized a back-to-school party for the children on the block asking them to clean up the alleys and yards of elderly residents. They were rewarded with a cookout and new school supplies.

Momentum grew slowly as active members recruited neighbors. Gofoe persuaded Mosley to join and then become her co-captain. Mosley brought Wooten into the group after a mutual friend introduced them and they bonded over a shared interest in gardening.

Wooten, who inherited the house at 3240 N. 14th St. and moved into it in 2007, shared the desire to do something about the desperation, hopelessness and petty crime she saw in the neighborhood.

Many block residents could not be persuaded to get involved and some who did were skeptical that they had the power to foster change. But when Wooten urged the group to stop focusing on the negatives and zero in on positive activities, the block club turned a corner.

“I knew the group wanted to do more than just complain,” said Wooten, who joined Mosley as co-captain. “It wasn’t just me leading. I listened.” She heard members say they wanted the drug dealers to stop hanging out on the block and the trash picked up on time. “[Engaging them in working for change] started with empowering them with small things they could do,” Wooten said.

After reading that the area had the city’s highest water bills, Wooten asked a water department representative to come to a meeting to tell members what they could do to reduce their bills.

Inviting two police officers who work in the area to block club meetings and working harder to hear and be heard by them has reduced criminal activity.

As word got out that something new was happening, more and more neighbors appeared at block club meetings. As communication and mutual trust grew and their actions brought results, block club members saw how their collective voice was louder than any individual voice.

Recently, to address the need for house repairs, 14th Street C.A.R.E.S. set its sights on getting loan assistance from the city by becoming a Targeted Investment Neighborhood [TIN]. 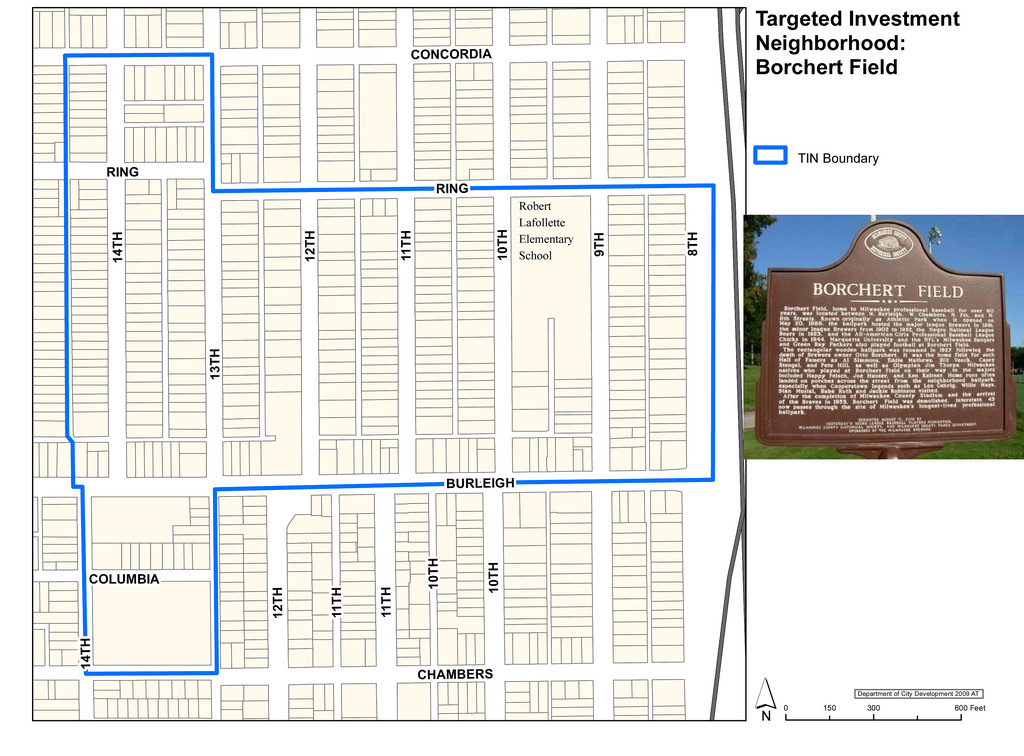 The Borchert Field TIN includes the double block between Ring and Burleigh streets on 14th Street, as well as several blocks to the east, north and south. (Source: Neighborhood Improvement Development Corporation, City of Milwaukee)

With Wooten taking the lead, the group did its research and prepared its case. TIN designations, up to this time, had only been granted to formal community development corporations. 14th Street C.A.R.E.S, as the first resident group applying on its own, had to demonstrate a serious commitment to meeting the TIN requirements.

In January, the group asked for the help of its Common Council representative, Alderwoman Milele Coggs. Wooten created a PowerPoint presentation and a map of the area and asked a core group of block club members to join her when she met with Coggs. The alderwoman was amazed both at the size of the group — 15 residents and business owners — and the quality of the presentation. She immediately agreed to support their application.

14th Street C.A.R.E.S. overcame another challenge when Wooten learned that David Weber of Neighborhood Improvement Development Corporation, the city agency sponsoring the TIN program, had reservations about considering a block club with no community development organization behind it. Again, Wooten prepared carefully.

With her PowerPoint presentation in hand, Wooten took him on a driving tour and pointed out the neighborhood’s assets. Wooten said, “His whole attitude changed. He said ‘I didn’t know all this existed here. I just didn’t know.’”

In February, 14th Street C.A.R.E.S. got the call that its application was granted. Beginning in April, Borchert Field would be Milwaukee’s eighth TIN. Qualified homeowners would be able to take out partially forgivable home improvement loans over three years.

14th Street C.A.R.E.S. has evolved from a block club with one simple purpose  — getting snow removed from the alleys — to one that brings together homeowners, businesses and city officials to solve complex community problems.

One example of how far the group has come is that Wooten and her colleagues are now teaching other neighborhoods how they got TIN status.

“Now everybody, whether they live in the Borchert Field TIN or not, they’re calling me.”

About Andrea Waxman and Adam Carr