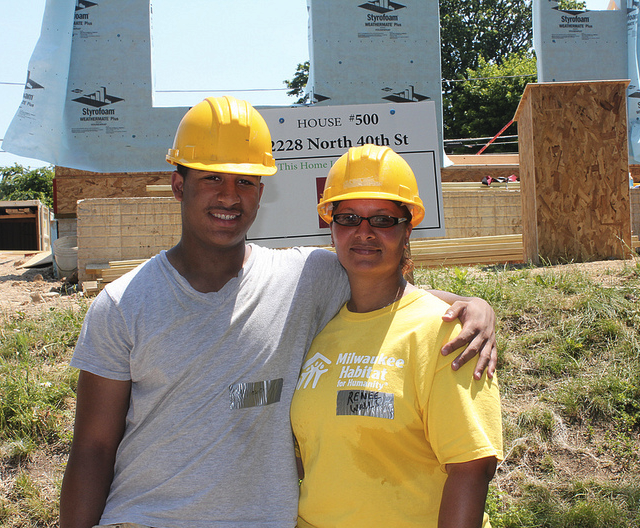 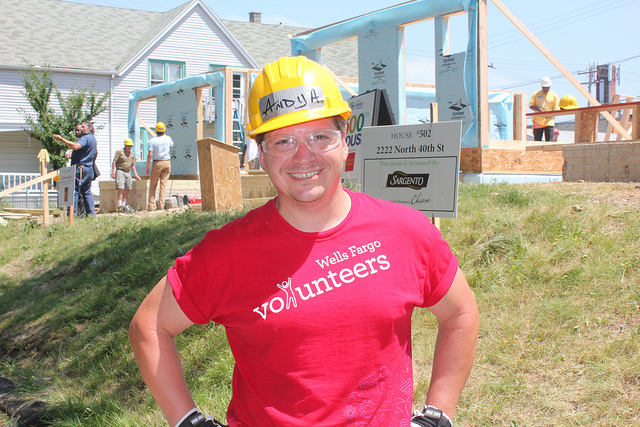 The walls are going up for seven new homes in Washington Park, including Milwaukee Habitat for Humanity’s 500th home since the organization established its Milwaukee branch in 1984. Milwaukee Habitat celebrated the milestone with a special ceremony.

“There’s a sense of optimism and hope that surrounds a Habitat build. This block is going to be changed,” said Brian Sonderman, executive director of Milwaukee Habitat.

Sponsored by Wells Fargo, the 500th House Ceremony marked the beginning of Milwaukee’s Habitat “June Blitz” week, during which staff and volunteers will complete the first stages of construction for seven homes on North 39th and 40th streets in Washington Park. More than 1,000 volunteers, including about 100 from Wells Fargo, will help construct the new homes.

Andy Azinger, a media producer at Wells Fargo, has volunteered for Milwaukee Habitat for five years. Wells Fargo offers him two days each year to volunteer in the community. In the past, he’s worked on the final stages of the building process. But this year, Azinger explained, he jumped at the chance to spend his volunteer days working on the beginning stages of the 500th home, at 2228 N. 40th St..

“Today, I had the unique opportunity to be here in the first two days of the build and see the walls go up,” Azinger said. “This is someone’s home—to be part of creating that for them is an honor and a privilege.”

Azinger’s connection to Milwaukee Habitat dates back to some of the organization’s first homes in Milwaukee.

“When the first Habitat homes were being built, I lived a block and a half away. I saw dozens of homes go up in my neighborhood,” Azinger said. The experience inspired him to work on his own home as a teenager and to volunteer with Habitat as an adult. 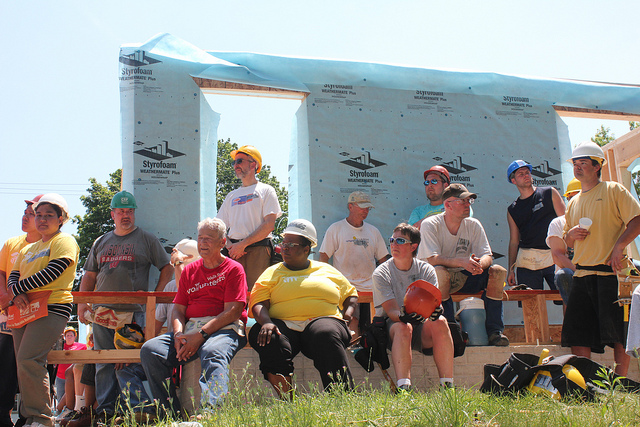 Volunteers listen to speakers at the 500th House Ceremony. (Photo by Carolyn Vidmar)

Milwaukee Habitat for Humanity is a nonprofit homeownership organization committed to building affordable housing for families in need. Habitat homes are built with the help of volunteers and the “sweat equity” of homeowners, who work with volunteers and staff during the construction process.

“It means the world to me,” said Renee Walls, the 500th homeowner, of her experience with Habitat. “I get to help build my house.” Walls will live in the home with her father and her son.

Walls said she’s lived all over Milwaukee, but currently resides in North Lawn. She’s excited to establish roots in Washington Park and expects the new homes to help the neighborhood.

“This is one of those days when you realize why you chose to live in this neighborhood, and why you wouldn’t want to live anywhere else,” Whaley-Smith said during the ceremony.

According to Sonderman, the ceremony served as both an opportunity to commemorate the milestone, and as a call to action for affordable housing in Milwaukee.

“The need for affordable housing continues. Housing is one of those constant needs that people have,” Sonderman said. “It’s foundational to the success of a family.”