You are here: Home / Home / Carousel / Festive Fondy Farmers Market gets off to fresh start
Share this... 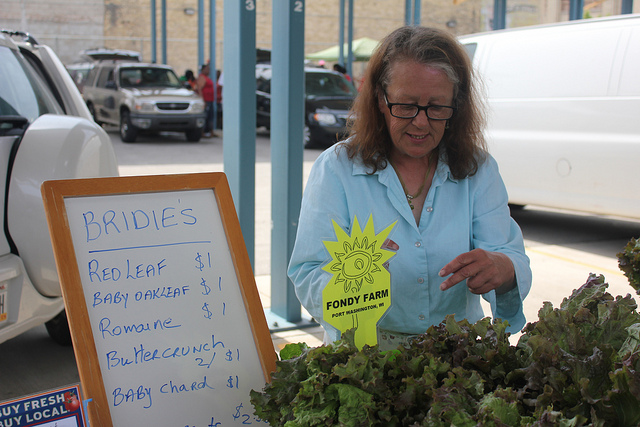 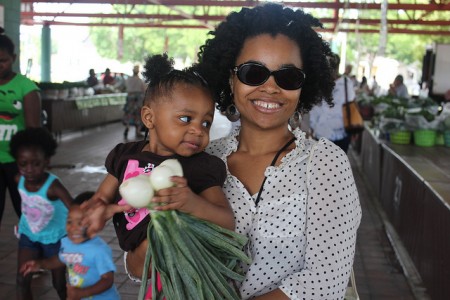 In 2011, Milwaukee transplant Brigid McGeehan decided it was time to change her life. She joined the new Fondy Farm Project, an 80-acre farm in Port Washington where farmers can rent land and share equipment.

“I had to get out of the office,” she said. “I got the opportunity to do this. It’s hard work, but it’s what I wanted to do for the rest of my life.”

Now, McGeehan runs Bridie’s Garden Market and sells her produce at the Fondy Farmers Market. McGeehan grows all of her produce on one acre of land at the Fondy Farm and does not use pesticides, she said. Originally from Ireland, she’s lived in Milwaukee for 23 years. She said she enjoys the diversity and energy at Fondy.

“It has a great vibe—it’s very interactive,” she said.

McGeehan and other Fondy vendors—including Brehmers’ U-Pick Farms and Walnut Way Conservation Corp.—sold their produce on the opening day of the 2012 Fondy Farmers Market. The celebration also included live entertainment and a BBQ cook-off.

“I needed to go shopping anyway, and I have family in the neighborhood. I figured that if I was going to shop, I should shop here,” said Connorie Russell, who was purchasing vegetables at the market.

“I think it’s important that underserved populations have access to fresh food. [Fondy] is special because it’s here, in the middle of the city,” Russell added.

The Fondy Farmers Market, 2200 W. Fond du Lac Ave., is an open-air market operated by the Fondy Food Center since 2000.

“The community itself is good for business. You get good customers, so you get good business,” said Hailey Xiong, who was helping her mother sell produce. Xiong said the family farm is in Somers, Wis., but they live in Milwaukee. They’ve been selling at Fondy for about seven years, she said. 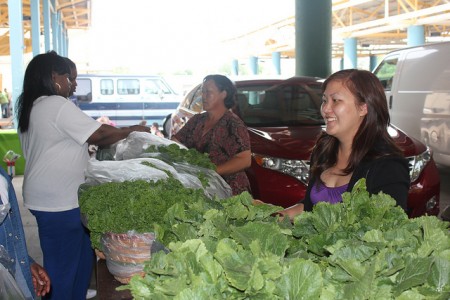 Farmers sell produce on the opening day of the 2012 Fondy Farmers Market. (Photo by Carolyn Vidmar)

Other vendors have a shorter trip to market, such as X’zayvion McCoy, who was selling vegetables and honey produced by Walnut Way Conservation Corp., 2240 N. 17thSt. in Lindsay Heights. McCoy started working at Walnut Way just three weeks ago.

Added Jeremy Davis, environmental specialist at Walnut Way, “It’s a chance to interact with the community, and an opportunity to offer our products and have a wonderful time on a beautiful day.”

According to Young Kim, executive director at the Fondy Food Center, Fondy is a “real, blue collar farmers market,” meaning that its committed to delivering produce that’s in-season and grown locally.

“Farmers market produce is picked by headlight the night before. Our tomatoes don’t bounce. They go ‘splat,’” he said.

Fondy’s commitment to local, fresh, affordable food won’t change, but Kim hopes the market will continue to grow and improve.

“I’d love to find a juicing vendor—someone with a juicing machine that makes vegetable and fruit smoothies on the spot. That would be cool,” he said.

The Fondy Farmers Market operates four days each week through Nov. 17. The market is open on Saturdays from 7 a.m. to 3 p.m., and on Sundays, Tuesdays and Thursdays from 8 a.m. to 2 p.m. On Saturdays, cooking demonstrations, live music and youth activities are available.