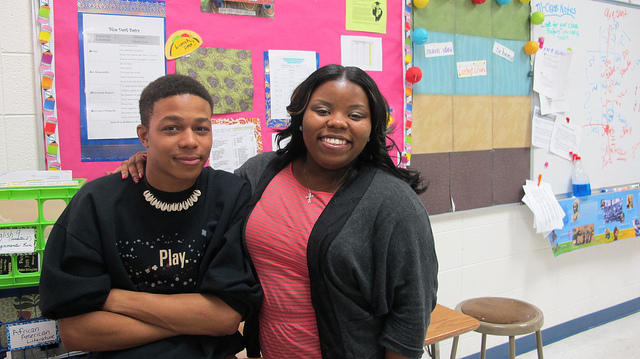 If it’s true that people vote with their feet, North Division Charter High School is heading in the right direction after its first year of operation. While 400 students started at North Division in the fall, 469 students have enrolled for next year.

North Division, 1011 W. Center St., returned to a traditional high school model this year after a failed seven-year experiment in which smaller high schools shared the building. The school’s teaching staff and administrators were replaced in the first phase of a three-year plan to turn the school around.

“The buzz has been very positive about North in the community. I’ve been getting calls, and the feedback has been very good,” said North Division Principal Stanley McWilliams.

“We still have a ways to go,” McWilliams acknowledged. “Although we improved academically, they were small gains compared to other schools, but they were still gains.”

“There is good work being done on behalf of the students at North Division, and our students’ scores are on the rise,” said Dennis Queen, regional executive specialist at Milwaukee Public Schools.  Queen oversees the Metro Region of MPS, which includes North Division.

The school year got off to a rough start, according to Teaira McMurtry, a ninth-grade English teacher whose mother graduated from North. “It was a weeding out of students who thought it would be the same as last year,” she said.

McWilliams has brought discipline and high expectations to North, according to McMurtry. When the principal received the first test scores in the fall, which were below passing, he implemented weekly drills to help students strengthen their testing skills and build self-esteem. 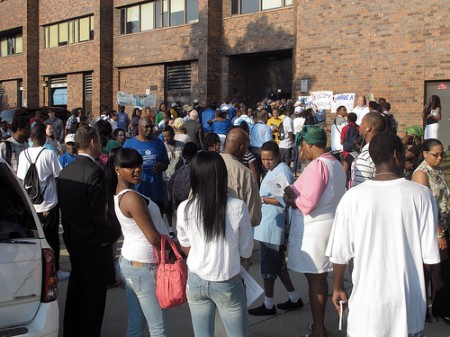 North Division students and community members gather on the first day of school in the fall.  (Photo by Matthew Bin Han Ong)

“As the year progressed, a lot of students realized that Mr. McWilliams was serious. He has a no-nonsense policy,” said McMurtry.

In September, 400 students were enrolled at North, which dropped to approximately 360 students by the end of the year. The school’s attendance rate was 87 percent, seven percentage points higher than the prior year at African American Immersion, the last school to occupy the North building, according to Roseann St. Aubin, communications director for MPS.

Some people still give North a bad rap, according to Corin Odum, a 17-year-old junior at North.

“All outsiders have heard about North are negative things, but from my point of view, I actually like it,” she said. Odum transferred from Hamilton High School, 6215 W. Warnimont Ave. She is a member of the Keystone Club, a leadership development program at LaVarnway Boys and Girls Club.

Now, Denson said, “I’m not insecure about saying I go to North Division. People have such a close-minded opinion because of what they see on TV, but that’s just one side. My whole family is North alumni.”

One staff member told McWilliams that teachers “have never known the building to be this quiet in six years” and that the culture has changed to one that is “conducive to learning,” the principal recalled.

According to Percy Eddie, MPS Recreation’s assistant recreation supervisor, “This is a totally different North, and staff here are making sure students are in class learning, and not in the halls,” he said.

Dr. Harry Oden, president of North Division Alumni Association, agrees that North Division is on the rise. He and members of the alumni association drop in regularly to check on students and staff. They also served as tutors and mentors, and spoke to classes during the school year. “We help in whatever way they need help,” Oden added.

McWilliams is well respected for his work in the past and at North Division, according to Oden. Some staff members — including McMurtry — followed McWilliams to the school because they believed in his leadership.

Louise Simmons, a clerical worker for 33 years, came out of retirement to help McWilliams rebuild the school in its first year. “She was here when the new North Division building was built [in 1979],” McWilliams said.

McWilliams is satisfied with the school’s improvement, commenting that he and the two assistant principals have pulled off a “miracle job.” He thanked the North Division Advisory Council (NDAC), Dr. Rogers Onick, former North Division project manager, and community supporters who helped the school make the transition.

The school has added job placement and youth development programs to assist students. Thirty North students graduated from JAG (Jobs for American Graduates), a program that prepares students for the workforce. Men of Vision, an all-male intervention group; and Women of Wisdom, an all-female group, meet at least weekly. An all-day Hip-Hop summit that attracted 250 boys from several high schools grew out of the Men of Vision group.

North’s long-closed swimming pool was re-opened this year. McWilliams said he plans to continue to offer swimming classes to students, and the MPS recreation department plans to organize a “family swim night” at the pool this summer.

North Division had a teaching staff of 23 this year, but McWilliams plans to have 26 teachers during the next school year. The original plan called for 437 students to attend North next year, but 469 already have registered.

During North’s first year, McWilliams focused on creating more structure at the school, he said. Next year, however, the concentration will be on instruction. Advanced placement classes and other programs will be added.

For example, Information Technology, Health and Nursing, and Business and Entrepreneurship programs will be implemented, taking advantage of existing facilities. “We’re using most of the building with the exception of the third floor and dentistry lab,” McWilliams said.

To continue to build school spirit and pride, McWilliams hopes to add a football team in the fall. North currently has a basketball team and a cheerleading squad.

“If we do what we set out to do” McWilliams said, “I see North growing to be one of the best schools in the city.”