You are here: Home / Home / Carousel / Fair and walk promote health and safety
Share this... 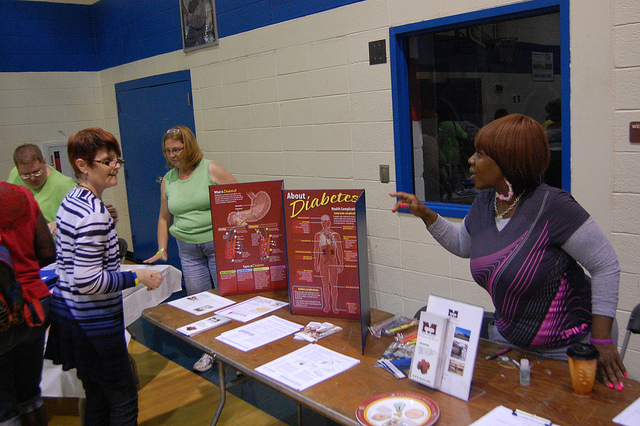 Kimberly Williams of Milwaukee Health Services talks to a woman volunteering at a neighboring booth. (Photo by Alec Brooks)

About 600 people turned out for the second annual Celebrating Healthy Families Health Fair and TALK Walk for Health & Safety sponsored by the Boys and Girls Clubs of Greater Milwaukee and Hillside Family Resource Center.

The fair and walk took place inside and around the Pieper-Hillside Boys and Girls Club at 611 W. Cherry St. and Hillside Family Resource Center on 1452 N. 7th St.

Local organizations — among them, AIDS Resource Center of Wisconsin, Milwaukee LGBT Community Center, Diverse and Resilient and the City of Milwaukee Health Department — collaborated to offer HIV testing to about 70 people. The fair also offered screenings for diabetes, blood pressure, sexually transmitted infections and vision. Information booths and entertainment, including a clown and several cheerleading squads, rounded out the event. 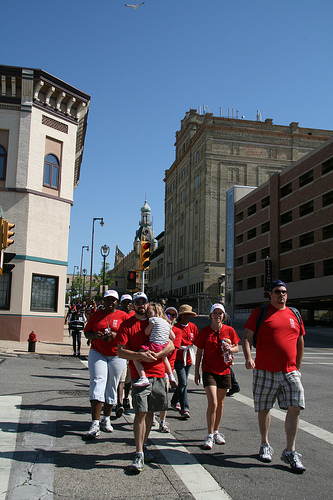 Participants in the TALK Walk for Health & Safety head south on Dr. Martin Luther King Drive. (Photo Courtesy of Housing Authority of the City of Milwaukee)

Hillside Family Resource Center started sponsoring the walk five years ago as a way to engage youth and families, promote safety and raise money, said Ann Wilson, manager of the center. This year’s event raised about $3,000 for health and safety programs.

Last year, the resource center participated in the national AIDS Testing Day as a standalone event.

This year, Hillside and the Boys and Girls Clubs decided to have the testing and fair at the same time to boost attendance.

“The more you collaborate and combine, the better you can work,” Wilson said. “Collaboration is always good. The only negative I see is that we did not get as many people tested.”

Wilson said that she and the other event organizers were trying to figure out why fewer people got tested than the year before.

“All in all, we think that it went pretty well,” she said.

Deonna Johnson came to the event because her daughter was performing with her cheerleading group. She stayed — and liked what she saw.

Phillip Corona represented Independence First at its booth. The non-profit agency provides a variety of services to people with disabilities, including support groups, education and assistive technology. The organization operates in Milwaukee, Ozaukee and Waukesha counties.

Corona said that the group hoped to do “as much outreach as possible” by being at the health fair.

Kimberly Williams, a family support worker at Milwaukee Health Services, said the fair fit well with the group’s variety of services, including assistance with asthma, diabetes and high blood pressure.

“Our primary focus is getting people in touch with their health,” she said.