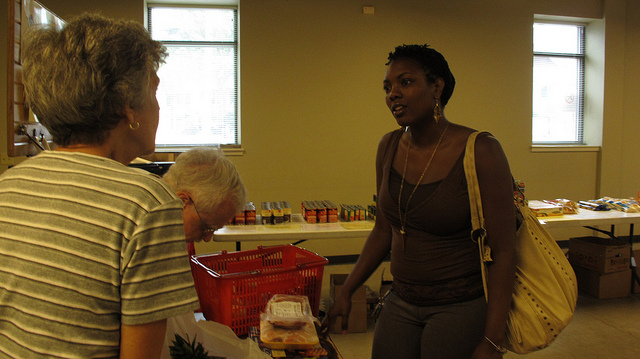 Shawnie Cockroft, 25, makes a purchase as she chats with volunteers.

Shoppers at the first Mobile Market since the announcement that the markets will continue at least through September were happy to hear about the reprieve and said they hope it will be permanent.

“It’s a great relief,” said Mike Howden, a volunteer at the United Methodist Children’s Services (UMCS) Mobile Market site. “We worked a long time to get the Mobile Market established.” He and his wife, 40-year residents of the Washington Park neighborhood, are members of the health and wellness committee that brought the market to the area at the beginning of the year.

Bess Earl, sustainable communities coordinator at Washington Park Partners, said it’s exciting to see the Mobile Market continue. “It shows promise,” she added. “There are a lot of people at the table to make sure that it will go on after September.”

SET (Service, Empowerment, Transformation) Ministry, 2977 N. 50th St., was named the fiscal agent for the Mobile Market, and will be responsible for finances and administrative support until Sept. 30.

Nicole Angresano, vice president of community impact at United Way, said she was alarmed when she read that the market might end. “We facilitated a community meeting with potential partners,” she said. “We wanted to have a short- and long-term solution. In the immediate sense, we wanted to make sure there was no stop in the program over the summer.” 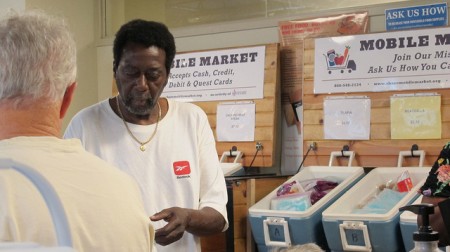 Joseph Harris, 64, has been shopping at the Mobile Market for two years.

If all goes well, SET, a 27-year-old health and human services organization, will take on the Mobile Market as one of its programs on Oct. 1, according Paulette Flynn, former executive director of SHARE Wisconsin.

“I’m happy that it’s continuing,” said Joseph Harris, 64, who has been shopping at the market for two years. “I would’ve been disappointed had it stopped.”

Angela Maldonado, a case management manager with the W2 program at the YWCA, 1915 N. Dr. Martin Luther King Drive, said that a lot of people come to the Mobile Market instead of going to the grocery store. “They’re already here in the building using other services, and they can get groceries and then go home,” she said. The next YWCA Mobile Market is scheduled for Friday, July 13, from 10 to 11:30 a.m.

“It’s going to be a shame to see them go if they don’t go past September. A lot of people in the community really rely on them,” Maldonado added.

In order for the market to be sustainable, it will need more community support, according to Flynn.

“Come out and shop,” Flynn added. “At the end of the day, the strength of the Mobile Market will be the support it receives from shoppers.”

Since the market’s transition from SHARE Wisconsin to SET Ministry as the fiscal agent, there have been some changes. It now has its own web address: www.shopmobilemarket.org.

Klapps Balistreri stated that continuing the market for a few more months during the summer isn’t enough.

“It’s important that we strive to continue it indefinitely until access to healthy food in underserved communities is addressed,” added Klapps Balistreri. “Many of our sites are housing authority sites that house elderly (people) and people with disabilities, which makes it hard for them to go to grocery stores.”

Regardless, community members who shop at the Mobile Market are glad to have it around for as long as possible. “It’s a big savings,” said Viola Lyons, 60, who has been a Mobile Market shopper for three months. “Being on Social Security, it helps me out a lot.”

Shawnie Cockroft, 25, agreed. She hasn’t missed the monthly Mobile Market stop at UMCS since the program came to the neighborhood. “I save money when I come here,” she said. “It’s a really good deal on tilapia, salmon and steak.”