You are here: Home / Home / Carousel / Veteran marks 70 years of Fourth of July parades
Share this... 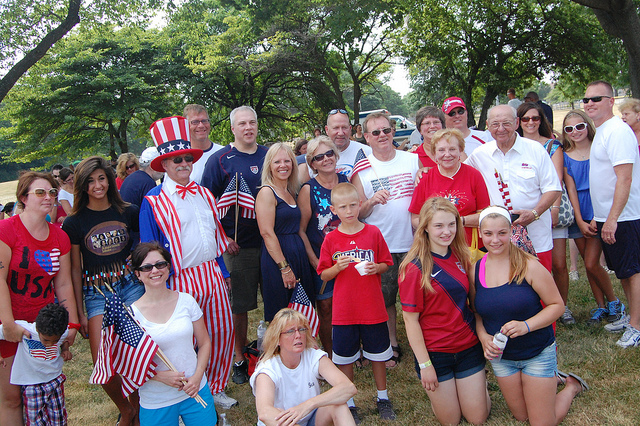 Even as the heat index reached into the 90s, Eugene Kotowski and about two dozen family members carried on their annual tradition of marching in the Fourth of July parade from 13th and Holt Street to Wilson Park.

“It’s just like one big family, when you’re marching,” said Kotowski, referring to the approximately 75 neighbors who also marched.

“Even if you don’t know anyone, everyone’s talking to each other,” added Kotowski’s wife Sylvia.

Kotowski, a Korean War veteran, began the tradition when he was a 7-year-old student at St. Mary Magdelen School. Children from St. Mary Magdelen and other parish schools would march in the parade together and finish at Kosciuszko Park, which the Kotowski children called “cozy park.”

Kotowski’s sister, Florence Buszka, doesn’t march any more, but she remembers the first parades with her siblings and father, who joined them every year.

“We’d get ice cream and a box of Cracker Jack,” she said. “And of course our flag.”

Grant Garinger, Kotowski’s nephew, said that when he first began to march in the 60s, he and his cousins’ favorite part was the ice cream they got at the end.

“We used to run through the line a few times,” he said, adding that they were careful to get ice cream from a different person each time so they wouldn’t be caught.

Garinger said the parade and the brunch afterward serve as an annual family reunion, with relatives from as far off as Hawaii and Texas coming, although many family members live in and around Milwaukee. Usually about 30 people come each year, Kotowski said.

“My favorite part is getting together with the family,” he said.