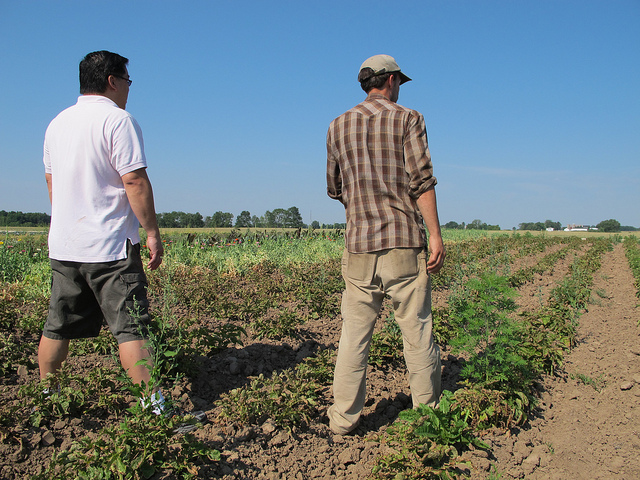 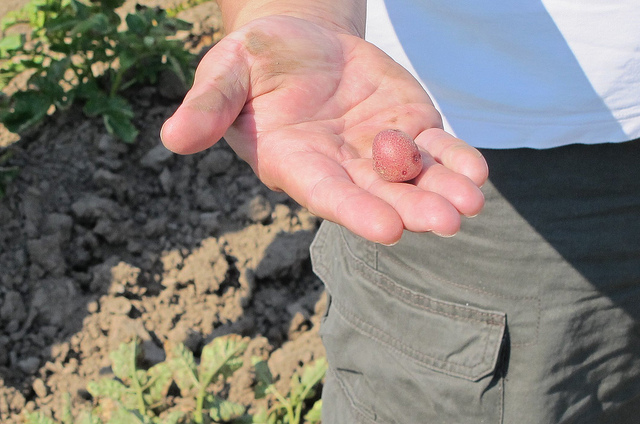 A Dark Red Norland potato stunted by the lack of rain is one-third the normal size. (Photo by Alec Brooks)

Every time Young Kim has seen rain coming toward Milwaukee County for the past few months, he’s gotten excited. But the storms seem to avoid Fondy Food Center’s farm each time.

“It’s frustrating,” he said. “We had a nice March and April, then nothing.”

Months of low rainfall have prevented many plants from even sprouting on Fondy Food Center‘s 80-acre Port Washington farm, and the ones that have are small or wilted.

To alleviate the dry conditions, the center has put in a new 415-foot well and bought an irrigation system. The deep well won’t dry up in drought conditions.

Originally, farm managers planned to install drip line irrigation this summer, but they chose a simpler system as an emergency measure. A tank carried on the back of a trailer pulled by a tractor has multiple sprayers, allowing farmers to water their crops.

The system cost $18,000, according to Kim, including the cost of the pump, which will provide water for the drip lines when they are installed at a later date.

Farm managers initially settled on drip lines because they are particularly water-efficient. They pump water through flat tubes that run along the rows of plants and spray water through holes spaced along their length. The design reduces water lost to evaporation and weeds.

Fondy’s farmers aren’t the only ones left staring at an empty rain gauge. National Weather Service records show that the Milwaukee area has received only 2 inches of rain since the beginning of June — 30 percent of normal levels. A NWS statement on the drought said problems for farmers are exacerbated by the higher-than-usual evaporation brought on by high temperatures.

Additionally, crops that have grown have been struck by waves of insects, Fondy Farm Project Manager Stephen Petro said. The high temperatures of the past weeks made it easier for insects to attack fields.

Yet, crops planted earlier in the year are growing and producing food for the market Fondy Food Center runs at 2200 W. Fond Du Lac Ave., though the scarcity has raised prices. 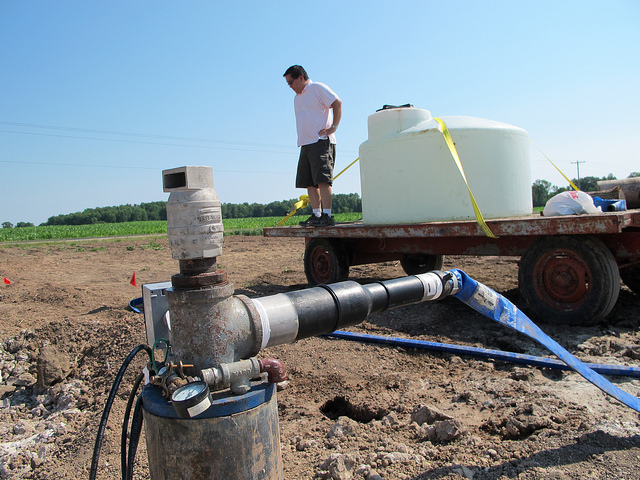 Young Kim stands atop a trailer used to transport water, with the new pump in the foreground. (Photo by Alec Brooks)

“We will have corn, but it will be expensive,” Kim said. “The market is just not as bountiful as we would like it to be.”

Petro said the drought was likely to affect other crops including grains, which will drive up the prices of other foods.

In the meantime, Kim and Petro are confident the irrigation system will make a noticeable difference.

Gesturing at the dry fields, Kim said, “This will be a lot greener in a week.”