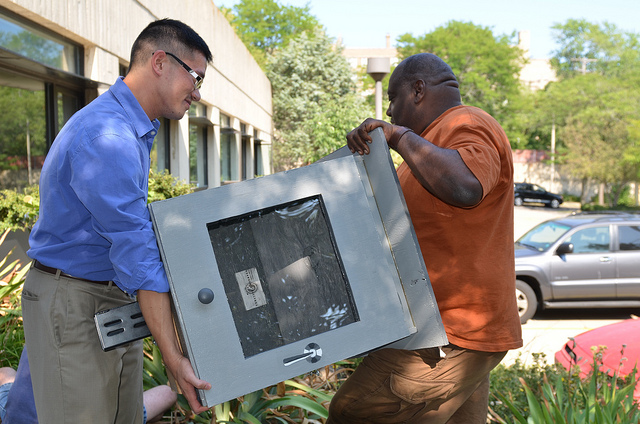 Starsky Cheng and Larry Green assist in the installation of a Little Free Library. (Photo by Sue Vliet) 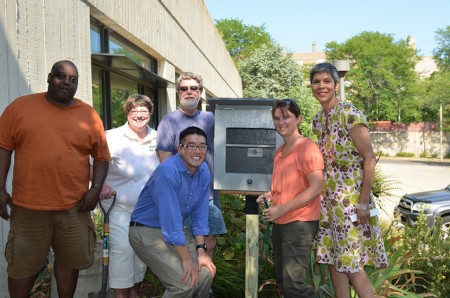 Organizers hope the learning center’s students and members of Central United Methodist Church, where the center is located, will take advantage of the library. Located at 25th Street and Wisconsin Avenue, the library also will be convenient for residents of the Concordia neighborhood.

Patricia Wyzbinski and Scott Gelzer donated and helped install the library as a part of Brandon’s Toolshed, a project to memorialize their son, Brandon Gelzer, who died in 2008. Wyzbinski and Gelzer are sponsoring 29 libraries in Milwaukee. They chose that number because Brandon Gelzer would have turned 29 this year.

Half already are completed and the rest will be finished during the next few weeks, Wyzbinski said.

She added that her son, a carpenter, would have been interested in the Little Free Libraries.

“He would have liked to build them,” Wyzbinski said. “Each one has its own character.”

Little Free Libraries issue no library cards, but people are encouraged to borrow and donate books. The Neighborhood House library joins over a dozen already installed in Milwaukee, including two in the Martin Drive neighborhood.

Neighborhood House’s library and the others were built by Milwaukee Artist Resource Network, which supports local artists.