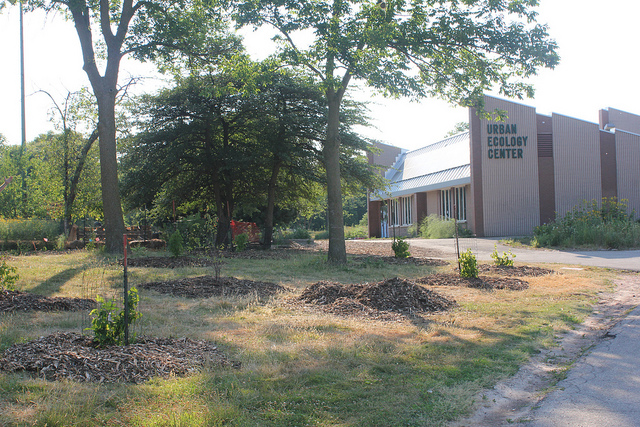 Forget candy bars, cookies and chips. Mike Zang envisions a day when the convenience stores in Washington Park will stock berries grown across the street at the Urban Ecology Center’s permaculture orchard.

“If there was enough excitement in the park, and people grew to understand and see the benefits, there would be a shift,” Zang said.

Zang, a community educator and land steward at the Urban Ecology Center in Washington Park, 1859 N. 40th St., is working to establish the center’s first permaculture orchard: a self-sustaining garden based on native and pre-existing species, primarily bushes and trees bearing fruit, nuts and berries.

“Being where we are in the inner city, being aware of food issues and health issues of impoverished communities…we felt like it fit here with our mission,” Zang said.

The permaculture orchard project began in fall 2010, but it’s now beginning to materialize. With some plants already in the ground, volunteers and UEC staff are working to weed, mulch and plant an even bigger area. 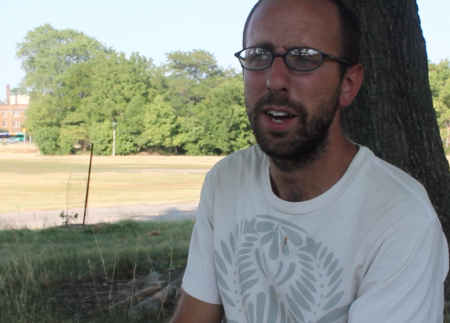 Mike Zang is leading development of the permaculture orchard. (Photo by Carolyn Vidmar)

“The permaculture concept is a food forest,” Zang said. “It’s not just trees and its not just berries—it’s going to create this amazing ecosystem.”

According to Zang, a key principle of permaculture is to use plants that are already available. The orchard will include a variety of native plants, which Zang defines as any plant that was found in the area prior to European settlement.

Rather than growing in straight lines or organized clusters, the fruits and trees are “interplanted”—a mulberry bush here, a gooseberry plant there. The planting appears haphazard but according to Zang, it’s strategic: some plants need more light than others, he said, and they’re arranged to compete with each other as little as possible.

“Over time, as these plants age, they’ll become self-sustaining,” Zang explained. “We’re hoping to create this natural effect—it’s not a walk-through garden.”

The goal of the orchard is to provide neighborhood residents with a free food source in the park. Eventually, he said, he’d like to see the orchard’s fruit work its way into food programming at the UEC and other community organizations. The fruit could be used in jams and pies, or for canning and preserving, he said.

According to Zang, it will be years before the plants in the orchard produce significant fruit. In the meantime, however, he hopes the project will mobilize volunteers and inspire community members to learn more about their food choices.

“It’s a work in progress, and it will be for years to come. But when you have people in the neighborhood who see what you’re doing and like what you’re doing and want to come out and support it, that’s when it spreads,” he explained. “How better to bring this into people’s world than to plant it right in the park and put it on their doorstep?”