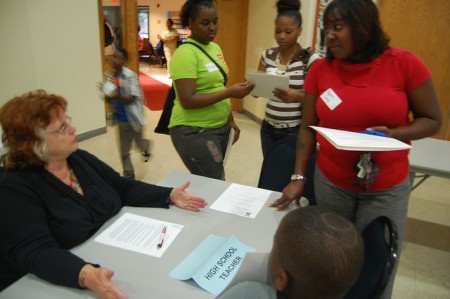 Juanita Stan and John Cain’s conversation on the bus began like pretty much any conversation between strangers: with the weather.

But soon they were talking about their own lives and Stan said she had just begun studying nursing at MATC. This piqued Cain’s interest. He was organizing a career fair and realized Stan would offer a different perspective, as she had just gotten her GED.

“So I gave her one of my business cards and asked her to give me a call,” he said. “Sure enough, she did.”

Stan was one of the 50 volunteers talking about their jobs at Our Next Generation‘s third annual Career Night at 3421 W. Lisbon Ave. Students came from ONG’s after-school program, community organizations and the neighborhood.

Cain, an ONG volunteer for four years, said that this year’s attendance was the highest yet, with an estimated 60 students attending.

The adults described what their jobs consist of and what qualifications are necessary. In some cases they discussed students’ career aspirations with them. 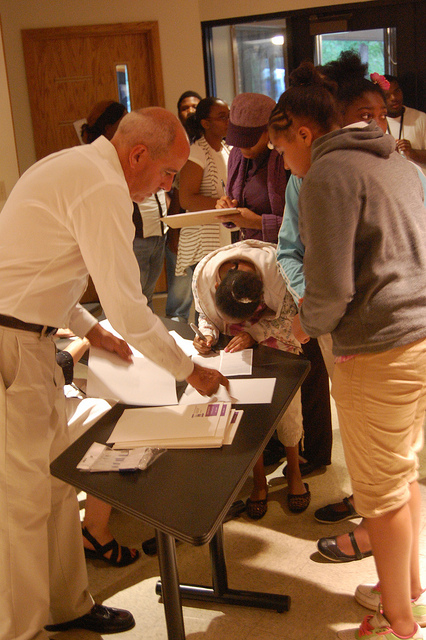 Students sign in for the career fair, as John Cain, event organizer, searches through papers. (Photo by Alec Brooks)

Students also helped select careers for the event. Cain said they started by asking fellow students what careers they wanted to learn about. In addition, Cain and other organizers asked friends and acquaintances to represent their professions.

The idea for a career night originated after Cain suggested that his men’s group at St. Mark’s Episcopal Church Milwaukee offer career counseling to students at ONG. A fellow member suggested they do it as a group, leading to the first career night three years ago.

Students praised the event for being informative. Alyssa Richardson said she learned about careers she knew nothing about before.

“It was very interesting,” she said. “I think I might use it (the information) later on in the future.”

Students also said talking to people in careers they weren’t initially interested in was a positive experience.

“For me, when I was talking to a high school teacher, I didn’t think I would be a teacher,” said Mikael Price, a high school student and leadership committee member. “As I talked to her more and more, I actually got interested … She actually explained the steps to me so I got a pretty good, all-around idea of how I would start.”

The professionals who attended also found the experience rewarding. Sue Sujecki, a school board member in West Allis and West Milwaukee, said she was happy to relate the importance of education to students.

“If you have adults willing to reach out to people … isn’t that what it’s all about?” she said.

The Rev. April Berends, pastor at St. Mark’s, agreed: “It’s been a good experience for us. Our people come back to St. Mark’s enthused and energized. It’s not every day people get a chance to inspire a kid.”