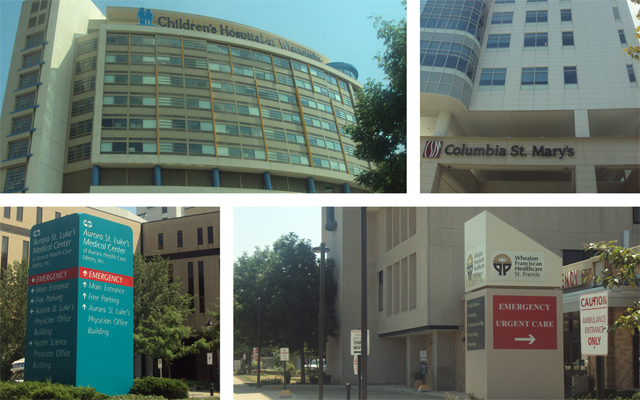 As a child, Veronica Chaparro-Barillas can remember interpreting conversations between her parents and their doctors during medical appointments.

While Chaparro-Barillas eventually turned this experience into a career as a supervisor of interpreter and translation services at Aurora Health Care, she said that serving as a child interpreter has little in common with her role as a professional.

“There were many issues with being a ‘child interpreter.’ I didn’t interpret completely and would make up words when I didn’t know how to interpret a certain word. I was definitely in over my head,” said Chaparro-Barillas. “It’s not a good idea for any child to be put through such a great level of stress.”

Many second-generation Hispanic Americans likely can relate to this experience, since family members of non-English speaking patients often are asked to fill the role of interpreter.

With the national Hispanic population expected to triple by 2050, stories such as Chaparro-Barillas’ illuminate a glaring need for better Spanish-language services. In medical settings, the consequences of a misunderstanding can be devastating. 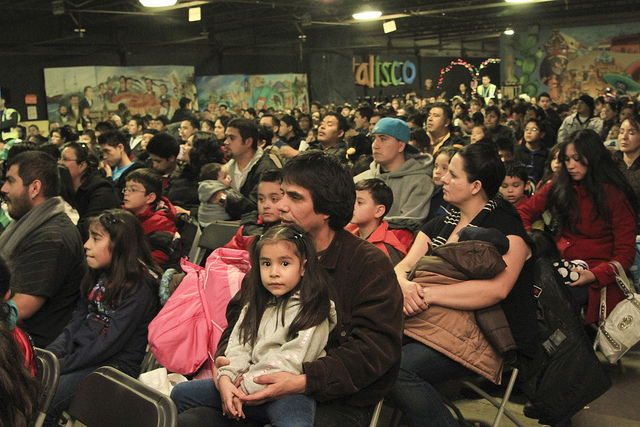 A new study of census data shows that the percentage of Hispanics in Milwaukee County nearly doubled between 1990 and 2010. Read More

Any hospital in the United States that receives federal assistance  — often in the form of Medicare or Medicaid — is required by law to provide a qualified medical interpreter at no additional cost to limited-English proficiency (LEP) patients. However, many LEP patients are unaware of this.

Luz Ortiz, director of interpretation and translation services at Wheaton Franciscan Healthcare, confirmed that many patients are unaware of their right to receive interpretation services. “We try to educate them by informing them of this right, and letting them know that the interpreters are trained professionals and that they are there at no cost [to the patient],” said Ortiz.

Wheaton Franciscan recently created a set of brochures designed to make patients aware of their rights to free interpretation services. These brochures are available in Spanish as well as Hmong, Bosnian, American Sign Language (ASL) and Russian.

Whether they are unaware of their right to an interpreter, or uncomfortable having an unknown person in the room during a medical examination, some patients opt to use family members or friends to interpret, or just do their best to understand.

This can lead to complications during the evaluation process, according to Tom Rudek, associate medical director of the emergency department at Aurora St. Luke’s Medical Center, 2900 W. Oklahoma Ave.

Without a qualified mediator in the room, thorough medical information can be difficult for doctors and nurses to come by. “The major problem is an inaccurate history,” said Rudek.  “You get a lot of yes or no, one- or two-word answers so you don’t really get the nice, detailed explanation for what you want,” he added. “Our interpreters know what we want to ask or what we want out of the question.”

Rudek added that a detailed history is critical when diagnosing a patient. Without it, a patient’s care can be in jeopardy.

“I don’t know of any bad outcomes from having a non-professional interpret, but I do know of unnecessary testing being done. We may order extra x-rays, extra lab results because we’re not sure exactly what’s going on. When we’re able to get a better detailed history and a better exam using the interpreters, it leads to more accurate testing and care,” said Rudek. 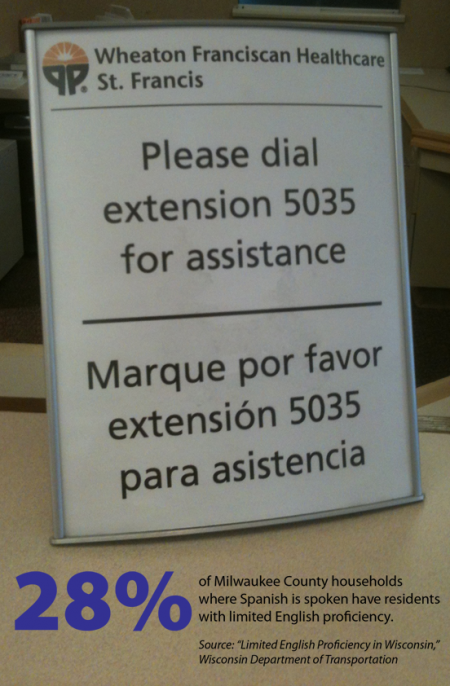 Patients at St. Luke’s who have used the interpretation services have been pleased that interpretation is offered at all hours and is free. Julio Torres, a Spanish-speaking patient who visited the hospital with his family, explained that while his family speaks fluent English, they aren’t at the hospital 24 hours a day, so he uses a professional interpreter.

Elizabeth Ovando, another LEP patient at St. Luke’s, said she was pleasantly surprised to learn of the free interpretation services offered at the hospital when she arrived in June without family or friends. Jaime Cervantes, an El Salvador native who visited St. Luke’s in November, said “they brought an interpreter within five minutes”.

Even while some patients are grateful for these services, many don’t understand what a stranger can offer that a family member cannot. According to Lorena Terando, associate professor and chair of the Translation and Interpreting Studies Program at the University of Wisconsin-Milwaukee, much more than learning a foreign language goes into translator and interpreter’s studies. “Just because you know a language doesn’t mean you’re equipped to translate and interpret,” she said.

Despite the clear need, UWM’s Translation and Interpreting Studies program is currently the only master’s program in the state to offer a degree in interpretation (verbal) or translation (written) recognized by the International Medical Interpreter’s Association. That’s likely because standards for certification did not exist until three years ago, when the National Board of Certification for Medical Interpreters first started offering a national certificate.

Students in the program learn listening and memory skills and practice hearing and speaking simultaneously. They also become versed in cultural competency, which gives them tools to clarify concepts that may not translate directly from country to country. For example, interpreters may need to explain insurance co-pays, which do not exist in many countries.

Medical interpretation students are trained to pick up on nonverbal cues such as body language to determine if the patient is feeling uneasy or uninformed. They also spend considerable time learning the specialized terminology that is required for the field.

For Rudek, a working knowledge of medical jargon is crucial for hospital interpreters. “We may say ‘CAT scan’ and the patient won’t know what a CAT scan is, but our interpreters will be able to explain what it is and the process, whereas a patient’s family can’t do that.”

Emily Joy Sielen, who was Alverno College’s first-ever graduate with a minor in Spanish Health Care Interpretation in December 2009, said the medical interpretation profession already has experienced a large shift since she began working three years ago at Children’s Hospital of Wisconsin in Milwaukee, at 9000 W. Wisconsin Ave.

“I think the biggest change is toward national certification. Without it, one hospital may have very high standards for their test and the other may not. I know a lot of interpreters now that are kind of reticent (to seek certification) because they don’t know what the standards are for the test or if they’ll be proficient.”

Their reticence is justified. According to Terando, just 3-5 percent of people who sit for the exam given by the National Board of Certification for Medical Interpreters currently pass it. However, Sielen said the exam board is evaluating the standard for proficiency as more and more people take the test. “[They are] adjusting that bell curve of what is ‘average’.”

Gaining a master’s degree in medical interpretation significantly raises graduates’ chances for passing the national certification exam, said Terando. “Some people might be able to pass the exam without a master’s, but it would be very difficult. It really strengthens your possibility if you have training when you go sit for the exam.”

Ortiz explained that the small number of certified interpreters is the reason most hospitals don’t require certification for employment. “The pool of people isn’t large enough. Before certification was available, not even a bachelor’s degree was required,” said Ortiz. “We used to depend on native speakers.”

In lieu of a widely used national standard, hospitals often create their own form of assessment to determine a candidate’s qualifications. At Wheaton Franciscan, candidates must pass a conversational exam, as well as an assessment that tests their knowledge of medical terminology. Wheaton’s interpretation department also takes into consideration the candidate’s education, experience and training, time abroad and familiarity with the culture of the people with whom they would work.

At Aurora St. Luke’s Medical Center, Chaparro-Barillas was first called upon to interpret while working in the hospital’s dietary department when it became known she was bilingual. “I would get pulled from my job to interpret on inpatient units and the emergency department,” she said. The hospital then hired her as a fulltime medical interpreter after she completed its training program and Waukesha County Technical College’s Language Interpreter for Health Services Program.

In addition to changing standards, new technology is also changing the field of medical interpretation. Hospitals are employing video interpretation or “language lines,” which provide an interpreter over the telephone during low-volume shifts.

Sielen agreed that there is a limit to what the language lines can provide. Since the least expensive option would be to rely solely on technology, it can be difficult to convince hospitals to hire more interpreters. “The benefits to being in person mean that the patient is going to better understand their care, their treatment, which means more healthy outcomes for the hospital, which is a win-win,” she said.

Interpreting and translating jobs are expected to grow 42 percent between 2010-2020, according to the Bureau of Labor Statistics. This compares to an average of 14 percent growth for all other occupations.

Milwaukee County boasts the highest percentage of non-English speakers in Wisconsin. The county’s Hispanic population grew 52.9 percent from 2000 to 2010.

At Columbia St. Mary’s Hospital, 2301 N. Lake Drive, the need for Spanish-language interpreters continues to grow. Ibzan Monteagudo, director of language services, said the hospital will be hiring Spanish interpreters in the next few months. “We have a good team now that meets our needs, but the numbers do continue to go up, especially for the Hispanic population.”

While federal law requires hospitals to provide qualified medical interpreters in every instance, some providers continue to ask family members or bilingual staff members to interpret.

The problem is that providers have no way of knowing what the family member truly understands or whether he or she is offering his or her own answers rather than the patient’s, Chaparro-Barillas said.

“Some providers find it easier to pull a bilingual nurse, nursing assistant or even a housekeeper instead of paging us [the interpretation team] and waiting a few minutes,” Chaparro-Barillas added. “This is truly a disservice to the patient and to the caregivers being pulled from their regular jobs.”