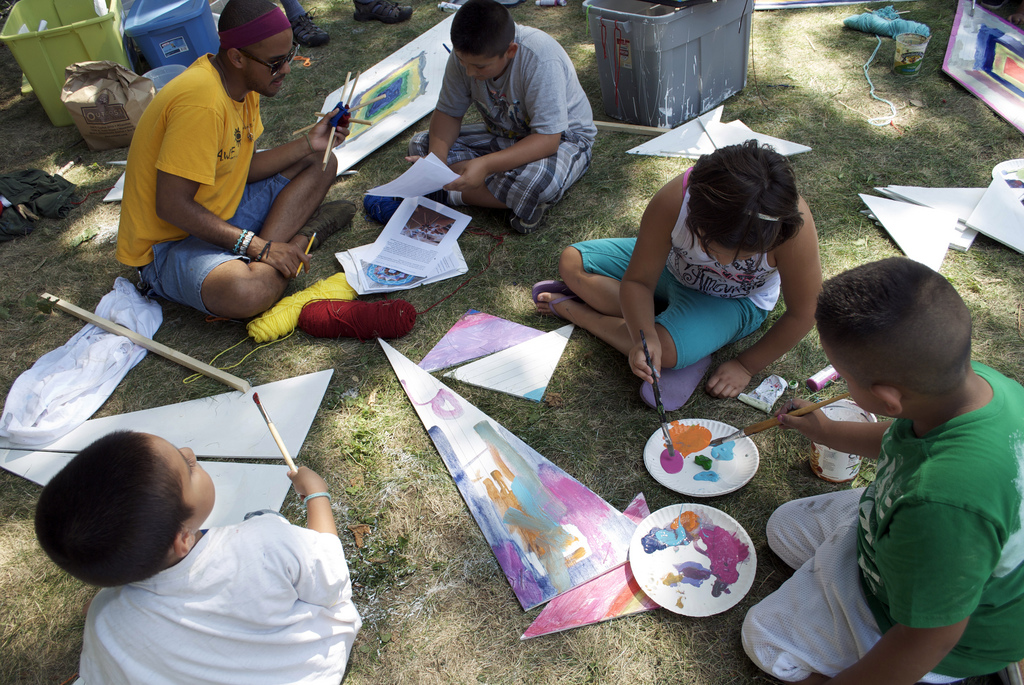 What is a park without the laughter, energy and participation of families and children? During the last week of July community members at the 29th & Burnham Pocket Park harvested the most significant outcomes yet to be found in a community space – creativity, self expression and collaboration.  During the week neighborhood children and their families helped create a successful art project in a newly developed pocket park on 29th & Burnham. The art beautifies the neighborhood while the process of creating the art provides a creative outlet for youth and brings neighbors together to build community.

The children were mentored and guided by lead artist Eriks Johnson and assistant artist Eric Ledesma as part of the Satellite Studio program from Artists Working in Education (A.W.E.), a nonprotît organization that sponsors artists to work creatively with children to enhance human potential, advance learning and cultivate community. In a matter of hours the garden was decorated with handcrafted yarn weaving patterns known as God’s Eyes, a Huichol (Native Americans from Jalisco, Mexico) spiritual object. They also built a wood branch structure where children could display their God’s Eyes and interact with the art. “It was way cool because you could see God’s Eyes like in the old times when your relatives made them and they thought they were powerful and I think they are too” – said an 11 year old resident when asked about his experience with the project.

The garden was developed over the past 10 months by neighbors working with Layton Boulevard West Neighbors (LBWN) with the support of the Neighborhood Improvement Development Corporation (NIDC), Groundwork Milwaukee, Milwaukee Urban Gardens (MUG), the Zilber Family Foundation, and LISC Milwaukee.  Students from Carmen High School and Centro Hispano High School joined with neighbors and LBWN to build and maintain the pocket park, a project that is ongoing.

The site was originally a city owned vacant lot after a home had burned down years ago.  The lot had been attracting some negative behavior including dumping, loitering, and vandalism.  As part of the Layton Boulevard West Quality of Life planning process in 2011, neighbors came together to decide what they wanted to see happen on the vacant lot.  Neighbors agreed on a multi-use pocket park that would incorporate gardening space, relaxation space, and a play area for younger residents.  Working with LBWN, resources were identified, work days were organized, and the pocket park was built.

The space has since become a gathering place for neighbors and this summer hosted programming by Artists Working in Education (AWE). When looking at the positive impact of projects like this in the community a mother added  “I think it could change or improve the community by bringing everyone together. My son saw friends from school here that he hasn’t seen all summer, even though they only live a few blocks away. I had him in summer school but I took him out because he was bored. He constantly needs new things to do and this is new for him.”